Kennett's Jagger McFarland had a goal during the Blue Demons' 4-0 shutout over Interboro, in the opening round of the PIAA District 1 Class AAA soccer playoffs on Oct. 23.

On the strength of a well-balanced offensive effort and two goals by senior midfielder Griffin Dight, the Kennett Blue Demons defeated Interboro 4-0 in the opening round of the PIAA District 1 Class AAA soccer playoffs, held Oct. 23 at a frigid Kennett Stadium.

In a match-up of two teams who came into the contest with identical 14-win seasons, it was apparent early on that expert ball-handling by 11th-ranked Kennett, as well as the goal tending of Blue Demon goal keeper Bryan Cook, would define the course of the match. Despite a stiff and blustery wind that swept over the pitch the entire game, Dight, Jagger McFarland and Nicholas Meola managed to keep the ball in the Interboro end throughout most of the first half. With 32:40 left in the half, Meola's shot from the right side hit the post, but ricocheted to Dight, who rifled the ball past Interboro goalie Brandon Weldon for the game's first goal. 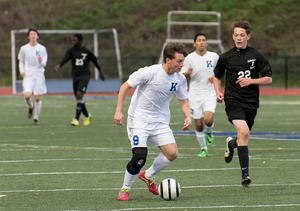 Cook's shut out performance began in the first half, when with 33 minutes left, he saved a goal attempt on a header by Foday Kayteh, and turned back a free kick by PJ Slagle a few minutes later.

After a goal attempt by Jonathan Camarena Zavala went wide of the net, and a header by Nicholas Brison hit the goal post, Brison followed up with a goal to give the Blue Demons a 2-0 lead  with 4:40 left in the half.

As the second half got underway, it soon became apparent that the weather was competing with the offensive efforts of Interboro to see which would become the coldest. Cook, with help from defenseman Sam Conrad, continually shut down any hope of scoring, while a mere 30 seconds into the second half, Dight punched in his second goal of the game from a short distance to give Kennett a 3-0 lead. A few minutes later, McFarland put the game out of reach with a shot past Weldon to end the scoring.