The Unionville Indians defeated Octorara 49-6 last Friday night, improving their record to 5-2 heading into a Week 8 showdown with Bayard Rustin. In recent years, the battle for supremacy in the Ches-Mont League’s American Division has come down to these two teams so it’s no surprise that, as the 2014 season enters its final weeks, these two perennial powerhouses are playing good football. Bayard Rustin enters Week 8 with a 6-1 record following a 42-6 win over Sun Valley. 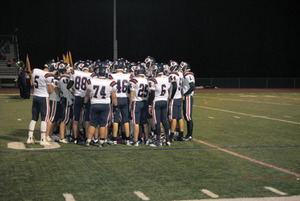 Unionville head coach Pat Clark said that his team is looking forward to the challenge when the Indians make the short trip to West Chester on Friday night.

“Rustin is a great program,・ Clark said. “You want to be playing the good teams in the middle of October, and I think we’re starting to play good football at the right time.”

Unionville put together a complete game against Octorara, playing well on offense, defense, and special teams. 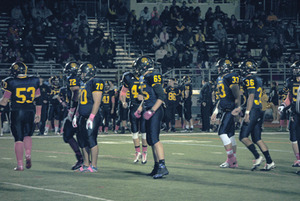 Unionville’s Tommy Singleton recovered an Octorara fumble on the kickoff to open the second quarter. Pechin promptly threw a 16-yard touchdown pass to Boon, making it 21-0.

Clark said that it was important for Unionville to get out to a lead because it helped neutralize Octorara’s talented duo of quarterback Alex Gooden and running back Corey Cooper.

“Number 12 and Number 23 can play for anybody in the county,・ Clark said, referring to Gooden and Cooper, who average more than 220 rushing yards a game between them.

Against Unionville’s disciplined, hard-hitting defense, however, the Braves could muster just 115 yards on the ground, less than four yards per attempt.

To Octorara’s credit, the Braves put together a 10-play, 62-yard drive to capitalize on a Unionville fumble late in the second quarter. Cooper scored a four-yard touchdown, cutting the lead to 21-6.

But Unionville kick returner Tyler Marmo took the ensuing kickoff 78 yards, following his blockers to the right sideline and racing all the way to the end zone for a score, taking back whatever momentum Octorara had.

Unionville opened the third quarter with a 60-yard drive that took up nearly eight minutes. Boon scored his third touchdown of the game, this time on a 12-yard carry. In the waning seconds of the third quarter, Hofmann-Reardon powered his way into the end zone from two yards out, putting the Indians ahead 42-6. 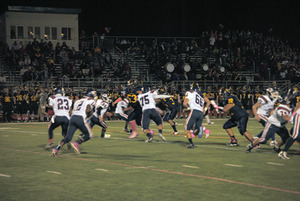 Unionville added a touchdown late in the fourth quarter when sophomore Dylan Thompson scored on a nine-yard run, making it 49-6.

As good as Unionville’s offense was, the defense matched the effort. The swarming defense did a great job of containing Gooden and Cooper. The defensive unit was so good that it was hard to identify standouts. Andrew Jones, Drew Stradling, Michael Weber, and Paul Steffy all had strong games.

Unionville’s special teams unit was solid as well. Sometimes, a football score can be misleading, but on this night the Indians・ performance matched what was on the scoreboard. Clark is pleased with how his team is playing heading into the final part of the season.

“I thought we played with great effort tonight,・ he said.