There they were, the seven seniors from the Avon Grove soccer team, standing with their parents on the middle of the soccer pitch, moments before they took the field against visiting Great Valley. Were it not for the way the game ended – a 5-2 loss –  it would have been a perfect evening. 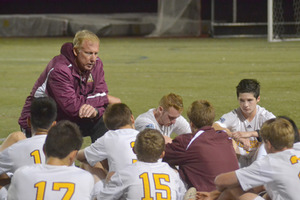 On a cool, full-moon evening before an appreciate Senior Night crowd at Avon Grove on Oct. 9, the Red Devils were looking to get over the .500 mark on their 2014 campaign, as well as put an exclamation mark on a season of improvement for a team that went 1-16 a year ago. Avon Grove struck early, when on its first visit to the Patriots' side of the field, forward Stetson Fenster placed a spin kick goalie Aidan Claffey to give the Red Devils a 1-0 lead, with just three minutes gone.

Greta Valley came into the match with a record of 9-3-1, and for good reason. Their offense, led by Kyle Hoops, Colin Deitch and Nick Paynter, persistently hounded Avon Grove goalie Will Schulteis throughout the first half, including one stretch that saw a diving save by Schulteis of a Hoops kick at the 25-minute mark. Three minutes later, at 22:12, Hoops scored Great Valley's first goal on a curving kick to the corner of the goal. A little more than a minute later, an Austin Wilk kick from the right side snuck past Schulteis to give Great Valley a 2-1 lead.

With just 20 seconds remaining in the half, Avon Grove tied the score on a free kick by Logan Jirak that was deflected into the goal by Evan Anderson. With momentum clearly on the Avon Grove side going into the break, head coach Dave Whitcraft instructed his team to look for – and take advantage of – any given opportunities that may come their way in the second half.

In a twist of irony, the opportunities were instead handed to Great Valley. With just 21 second gone in the second half, Hoops' booming kick from the right side flew past Avon Grove goalie Max Osbourne to give the Patriots a 3-2 lead.

“We go up one, they go two, and we tie it, and we had every reason to think that things in the second half would go well,” Whitlock said. “The fact is, they score with 21 second into the second half. That was not the necessarily the turning factor but an early factor.”

At the 29:48 mark, Deitch, recovering a missed shot, lifted a kick over the head of Osbourne and into the goal to give Great Valley a 4-2 lead. Four minutes later, the Patriots netted their last goal of the game, when a shot by Hoops was accidentally deflected into the Avon Grove goal by the Red Devils' Brian Hatfield, who was desperately attempting to kick the ball away from the goal. 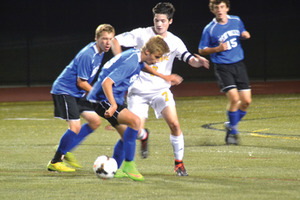 Despite the loss, which gave Avon Grove a 5-6-1 record to place them in the middle of the pack in the Ches-Mont National – Whitlock praised his players, many of whom openly expressed their emotions after the game.

“Going from a 1-16 team last year to where we are now?  We're pleased, but my expectations and my players' expectations have always been high,” he said. “To their credit, a 5-2 loss to a 10-3 team was played over the course of 80 minutes, with opportunities to get back in it. That's a testimony to their willingness to want to work for 80 minutes.”