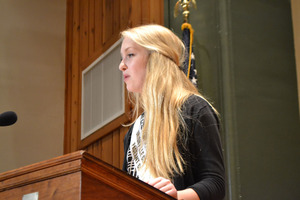 The contest served as the kick-off to the Unionville Community Fair, whose theme this year is “Treasure the Memories,” in celebration of its 90th year. Kennett Square Board President Leon Spencer served as the event's master of ceremonies, and it was judged by Olen Grimes of the Artworks and Metalworks Galleries in Kennett Square; Karen Manzone, the 2008 fair queen; and Michelle Thomas, chief financial officer of Bove Jewelers in Kennett Square. Danielle Chamberlain, fair president, welcomed the audience, and The National Anthem was performed by UHS student Eva Sheppard. At intermission, a tribute was made to Andy Joseph, a 2012 UHS graduate and musician, whose band Windoview frequently played at the fair. Joseph died suddenly on Aug. 29 at the start of his junior year at Tulane University.

Long-time fair chairperson Bonnie Musser presented a dedication of thanks to fair secretary and pageant committee member Berta Rains, for her long-time service to the fair. In honor of the fair's 90th year, Connie Windsor, of the office of State Senator Dominick Pileggi, and State Rep. Chris Ross, both presented Musser and Chamberlain with commemorative citations.

As part of the competition, each contestant delivered a 3-5-minute speech about the fair by answering the question, “Why you should come to the fair.” Dunbar reflected on her early experiences of volunteering at the fair, which included selling tickets to the cow pie bingo event.

“I was absolutely terrified about having to go talk to strangers,” she said. “I was pretty shy then and way out of my comfort zone, but after I got started, I realized that there was nothing to be afraid of. By the end of the day, I was yelling 'Get your cow pie bingo tickets' until I lost my voice.”

She also credits the fair for being the first place to recognize her love for photography, where she won first-place ribbons.

“It was a great feeling to walk up to my pictures in the barn and see a little ribbon sticker on the tag,” she said. “The fair allowed me to express myself and be rewarded for doing so.”

Rechenberg's presentation expressed the many similarities between the fair and the upcoming Thanksgiving holiday. “Fall reminds me of one of my favorite holidays, Thanksgiving, and the event I wait all year long for, Unionville Community Fair,” she said. “At Thanksgiving, we slow down and  focus on re-connecting as a family. And as members of our community, we must also make time to reconnect. For 90 years, the fair has restored our sense of pride in and the love of our historic town.”

White, the 16-year-old daughter of Sue and Syd White of West Chester, is a member of the school's international club and traveled to Australia with them this past summer. She has been a member of the Girl Scouts for the past 11 years, and also has a black belt in karate.

Rechenberg, 17, is the daughter of Kurt and Barbara Rechenberg of Kennett Square, and is president of the UHS Philanthropy Club, and sings with the school's choir and with several other choral groups. 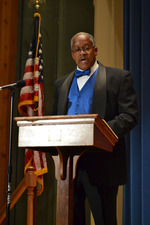 “I have had memories of this fair since I first moved to this community when I was three,” Rechenberg said. “I've been doing this pageant for quite come time, and this is truly a dream of mine. My main goal is to be an ambassador for the youth, and not a lot of kids know about agriculture and how important it has been to our community. We started as an agricultural community and still are today, which is what makes us so unique.”