For his next project, Carlin has completed sketches for a series of figures that will be installed in an Illinois church.

At the end of two days of back-to-back media interviews about the same painting, Neilson Carlin was still smiling. That's a testament to the enthusiasm he has for what he calls “by far the most important commission of my career.” 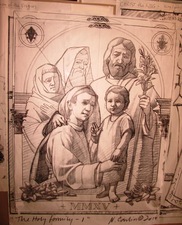 Last January, Carlin was contacted by Bishop John McIntyre to paint a portrait of the Holy Family that would be the central icon for next year's World Meeting of Families in Philadelphia. The gathering of Catholic clergy, leaders and families from Sept. 22 to 27, 2015 will bring a global spotlight to the city, and Carlin's painting will be front and center in the festivities. He started sketching in the spring.

Sitting on a folding chair in his Kennett Square studio on Friday morning, Carlin said the organizers of the World Meeting of Families gave him some guidelines initially. “The request was to show the Holy Family, with the parents of Mary, Anne and Joachim,” he said. “So there are at least five figures. And they wanted Jesus to be a toddler, not a baby, so it doesn't look like a nativity.” The grouping was meant to suggest the continuation and bonds of the family, in keeping with the theme of the world meeting, “The Family Fully Alive.”

Carlin has come through with a breathtaking, glowing family portrait that will be completed in 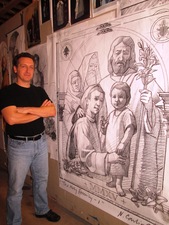 time for a Sept. 7 debut and blessing at a mass in Philadelphia, where the painting will be blessed by Archbishop Chaput and revealed to the world. For the media, only the sketch is being shown for now.

“There's always a progress element with any commission, and that's really so that the client knows what they're going to get,” Carlin said of the working process for the painting. “I need their feedback. I don't want to just deposit something on their doorstep without having making sure it's what they want. Otherwise, this has been one of my more pleasant commission experiences. The direction has been concise and helpful, and they've let me do what they hired me to do.” 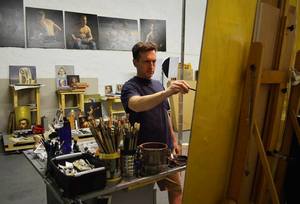 Carlin said the design of the piece has changed very little from his initial sketch – one of two that he submitted. “I started to question myself,” he said. “Wow, did I hit a home run the first time out? I presented two sketches, they were happy with both, they picked one and it's changed very little since that first sketch. They were very pleased with the direction.

“Bishop Macintyre came directly to me. Clearly he'd seen my work,” Carlin said. “He told me that I have a Baroque sense of light and weight, and that's what they were looking for.”

In the Catholic church, the purpose of the icon is to focus the viewer's thoughts and encourage reflection and prayer. Carlin's work is the only commissioned painting for the World Meeting of Families, he said, and so it will be used for marketing and perhaps in keepsakes of the event. “I don't know the ins and outs, but I presume it's going to be used in various ways,” he said. “At this point, I'm just trying to get the piece done.”

Of course, with rumors circulating that Pope Francis might attend the 2015 conference, Carlin can only guess. “I know of various news reports, but that's well beyond my pay grade,” he said, laughing. “Everyone will be pleased – Cathoic and non-Catholic – if he comes. And I assume he will see my painting at some point.” If Pope Francis does see the painting in person, it will be a crowning achievement in Carlin's career, which has come to focus almost solely on commissions for churches.

With the global exposure that the 2015 World Meeting will receive, Carlin's list of commissions could well fill up even more than it already has. “We'll have to see where it goes,” he said with a shrug. Next up is a commission for life-size figures that will be painted and installed in niches in an Illinois church. The sketches are laid out in his studio, awaiting his brush.

But first, Carlin is nearing the completion of the Holy Family portrait, which is on a four-by-five-foot panel on his easel. “It's at a point where it's far enough along that I can see the finish line,” he said. “I can see where it's going to end, and it's where I want it to end. I've said that, with this piece, I want to make sure I leave it all on the field. I'm confident that I'm going to get there.”

Carlin will be at the unveiling mass in Philadelphia on Sept. 7 – “The whole clan will be there in our Sunday best,” he said with a smile – and he will be as involved in the World Meeting as the organizers want him to be.

His painting will ultimately be permanently installed in the Cathedral Basilica of Saints Peter and Paul in Philadelphia, and Carlin has planned for its location. “I always try to pull in the architecture it's going to sit in,” he said of the painting. “So it's very clear that it was done for that location. The columns and the arch mimic the details of the altar at the cathedral. When you're sitting there, when you look at the altar and you look at this piece, you know that they were done in the same color palette.”

An inscription along the bottom will add the date, so that, “When people see this ten years from now, yes, it's an image of the Holy Family,” Carlin said, “but it also calls to mind what happened in Philadelphia in 2015 under Pope Francis.”