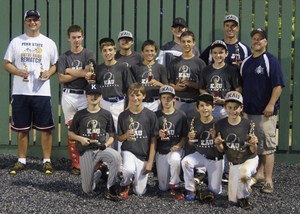 A first-ever home run by Christian Saldana propelled Optimist and its potent offense to a 16-3 win over Jaycees in the KAU Little League Intermediate 50/70 Division Championship. Saldana, a 7th grader at Kennett Middle School, didn’t break in to a customary home run trot. After the game he admitted he didn’t know where the ball had gone until he saw his teammates lining up at home plate. He knocked in four of Optimists’ runs with that homer and a scorching two-run single down the right field line. Winning pitcher Tommy Patrissi struck out seven in four innings.

KAU champions were also determined in the Minor A, Minor B, and Minor C Divisions.

P&V D'Amico defeated Sinton in the Minor A Division title game game, 3-1. Defense by both 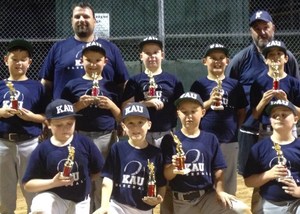 teams was stellar and in the end decided the game. The D’Amico squad led going into the bottom of the sixth. With two out, Sinton loaded the bases. The game ended when the Sinton player on third attempted to steal home on a passed ball, but was thrown out when catcher Ben Gehrt tossed the ball to pitcher Brendan D’Amico covering home plate for the third out. 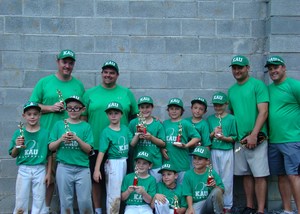 In Minor B, To-Jo Mushrooms edged the Sophia Bilinsky Realtor team, 6-5, after a dramatic sixth inning. With the score tied 3-3 at the end of the third inning, the coaches turned the game over to the bullpens. The Bilinksy squad scored two quick runs in the bottom of the fourth for a 5-3 lead. In the top of the sixth inning To-Jo’s leadoff batter Grant Urie singled and  Brennan Smith walked. Ben Bolhouse, who finished the game two-for-four with three RBIs, tied the game with a double, advanced to third, and scored the eventual game-winner on a fielder’s choice. The drama continued in the bottom of the sixth. William Oscar led off with a single for the Bilinksy squad, moved to second on a fielder’s choice and attempted to score the tying run when James Cresta singled up the middle. To-Jo center fielder Michael Casson relayed the ball to shortstop Brennan Smith, who threw to catcher Grant Urie to make the tag on Oscar for the second out of the inning. The Bilinsky team loaded the bases in the bottom of the sixth. Leadoff hitter Anthony Miller hit a sharp ground ball to the ToJo shortstop Smith, who knocked it down to save the tying run from scoring. The game ended when Bailey Shindle recorded a strikeout for the last out. 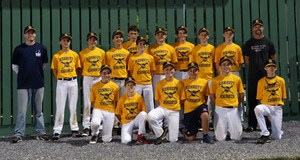 championship, 6-5, over Servicemark. Nick Vitale singled and scored in the fourth for Dick’s first run. Joe Carozzo began a two-out rally in the fifth when he knocked a triple to score Joaquin Alban, and then stole home. Down 5-4 in the bottom of the sixth inning, Dick's mounted another two-out, two-strike rally. Trevor Dunne drove home Colin Sarosi with a single to tie the game. After Alban singled, Carozzo recorded the game-winning run with walk-off double.