It’s a warm, sunny afternoon in mid-June. The calendar says that summer is still a week away, but the weather suggests otherwise. For Kyle Fisher and Dillon Camac, graduation day is only two days away, but they are too busy to spend much time reflecting on their time at Avon Grove High School or getting sentimental about the milestone moment in their young lives. Instead, they are busy planning out the first tour for their band, Entropy. The trio is rounded out by bassist Dan Panczner, a 2012 graduate of Avon Grove High School. 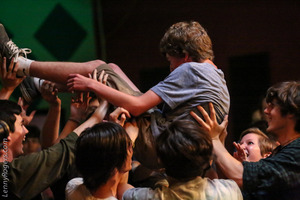 Fisher, the singer and guitarist, said that the tour includes shows in Philadelphia, Wilmington, Del., Baltimore, Washington D.C., Atlantic City, and New York City. He is particularly looking forward to the Wilmington show, which will take place onJune 29 at Accent Music on Kirkwood Highway.

The hope is that the short tour, which follows up the release of the band’s debut EP “Curve,・ will be the launching pad for a wider audience.

“We’re hoping to get our foot in the door for the northeast region,・ Fisher said. “Luckily, there 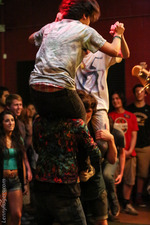 are a lot of major markets in the region.”

In the interview on June 16, Fisher outlined the band’s plans to conquer the world, or at least the music-listening part of it that resides in the northeastern United States. 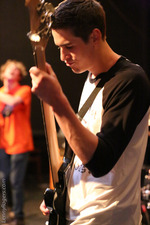 Fisher, Panczner and Camac started practicing with each other in the fall of 2013 and their unique style emerged organically, combining the sounds of musical influences like the Smashing Pumpkins, the Red Hot Chili Peppers, Nirvana, Title Fight, and Snot. They’ve described their music as psychedelic grunge.

“We make songs that don’t really fit into a genre,・ said Fisher, the band’s main lyricist.

The band’s main goal when crafting a song, Fisher said, is creating something that is genuine.

They are very pleased with the results of their debut effort, a four-song EP.

“These are our first four songs as a band,・ Fisher explained. He came up with some of the 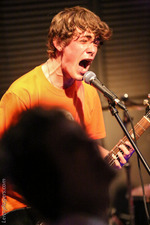 basic riffs, but each of the songs was a combined effort of all three members and reflects where Entropy is as a band right now.

“Too Many Humans・ is a song that finds Fisher thinking about his past. Music reviewer Justin Kreitzer noted that the song features a bass line similar to Soundgarden’s, but also has jangly guitars that are like Silverchair’s early brand of post-grunge alternative rock. Kreitzer also praises Fisher’s vocals on the track because he manages to match the intensity of the heavy music.

“Judge・ is a political song hinting at how the government is watching everything, but not really doing anything to help its citizens.

The genesis of the song “Curve・ came from a time when Fisher was at a party and he observed how certain people were acting insincerely because they wanted to fit in. Fisher realized that he had done the same thing himself.

“Highway・ is about parting ways with a girlfriend. 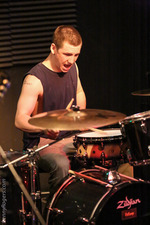 Entropy recorded “Curve・ after a few months of rehearsals. They were fortunate enough to make a connection with Kenny Eaton, a member of the band Time Columns, and soon thereafter the trio was recording “Curve・ at Eaton’s Mystery Ton Studios. Eaton engineered, mixed, and mastered the tunes.

That the band would write music, record it, and bond so seamlessly with each other shouldn’t come as a surprise. All three members live within five minutes of each other in the Landenberg area and, in an odd coincidence, they are all born in early March.

Fisher, Panczner, and Camac knew each other from school and from other bands that they have played with over the years. 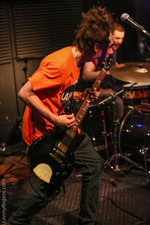 years ago, after the pair met at Boomers in Avondale. Panczner didn’t remember Fisher’s name after that initial meeting, but he remembered that Fisher had been wearing a Ramones t-shirt. An appreciation for good music has bonded the bandmates ever since.

Fisher said that music has always played an important part in his life.

“Music is something that’s always been there for me,・ he explained. “It’s a good way to get things that you believe in out to the world.” 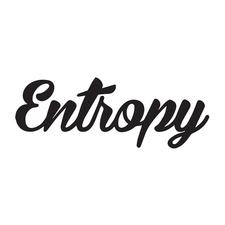 “The band that really got me into music was Green Day,・ Camac explained.

“They influence everybody,・ Camac said.

With their varied influences, each member brings something different to the band.

Fisher said that Panczner has a very natural bass playing style that allows him to pick up songs with ease. He also pairs with Camac to form a solid rhythm section.

With each new song that the band attempts, Fisher is growing as a songwriter.

“I think Kyle is a lyrical genius,・ Camac said.

The drummer, meanwhile, brings a driving beat that can be credited to his rap influences.

“I’ve been listening to Led Zeppelin a lot lately,・ Fisher said. “We’re influenced by everything.”

Entropy started playing live shows in January, and each one is a valuable learning experience.

“We’re learning how not to have technical difficulties,・ Fisher joked.

“We might as well make something out of our youth while we have it,・ Fisher explained.

If that’s not the perfect credo for rock ’n roll, nothing is. Now that all three band members are high school graduates, the world is filled with possibilities.

“I don’t know where this will take us,・ Fisher admitted. “We’ve been steadily growing. I would love to be touring around getting what I believe in out to the world. Having a solid regional following would be fantastic. If the music’s good, things will happen. Music finds a way.”

Entropy’s Wilmington show on June 29 takes place at Accent Music on Kirkwood Highway.  The show also features the Newark, Del.-based We Are Not. Tickets are $5 in advance and $7 at the door and are available online. The doors open at 6 p.m.