The UHS Chorale, led by Jason Throne (left), performed 'The Star Spangled Banner,' the UHS Alma Mater and 'Over The Rainbow.' The UHS Class of 2014 stepped out of high school and into the future on June 4 at the Bob Carpenter Convocation Center in Newark, Del. 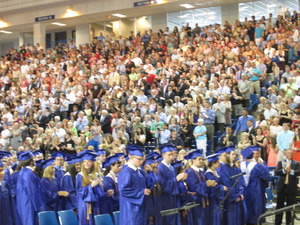 In front of a huge audience of family members and friends, the students heard the UHS Chorale, directed by Jason Throne, sing a contemporary arrangement of "Over the Rainbow" that was perfectly performed.

Principal Paula Massanari continued that theme in her speech, telling the students to, "Look beyond that rainbow, smile, and get to work on your dream. Pick true friends -- the kind who'll come to your 80th birthday party. Choose your path -- your yellow brick road -- carefully. There's no place like home, and Unionville High School will always be your home."

phone message, canceling school because of winter weather. "It's OK, you can laugh about that," Sanville said with a grin as the audience chuckled.

Student honor speakers Grace Delaney, and the duo of Ari Bleemer and Allison Hsu, spoke eloquently about their years at Unionville, throwing in some quips of their own. Brock Benzel composed and performed an original song at the ceremony, playing piano and singing with confidence as the crowd sat in rapt silence. 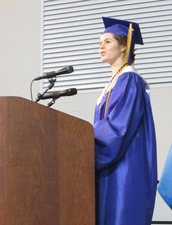 The guest speaker was Unionville social studies teacher Cody Stafford, who was voted by students as the UHS Educator of the Year. Stafford, who has taught social studies for two years at the school, thanked the students for the recognition, and recalled that, "Just a few years ago, I was where you are, listening to advice from guy in a suit."

Stafford said the students had actually taught him three things -- to be patient and persistent, and you will succeed; to give back to others; and to listen and keep an open mind.

"You learn far more by listening than by speaking," Stafford said. "I 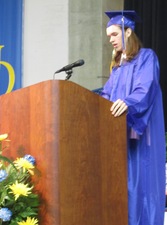 After the diplomas were given out, the crowd and the beaming graduates met in front of the Bob Carpenter Center for thousands of pictures, hugging family members and their friends as congratulations were offered under a picture-perfect, sunny sky.