A new study provides the guidelines for relocating the New Garden Township Police Department from its current temporary location into a new and larger facility.

To best illustrate the fact that the trailers being used by the New Garden Township Police Department are temporary ones, they were used last year to house the administrative offices for the U.S. Open golf tournament on the Main Line. 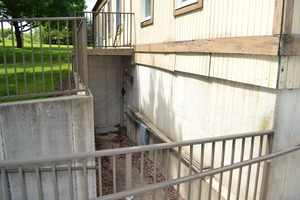 At 2,200 square feet, the cramped facility -- a U-shaped hallway connecting 10 small rooms -- gives the clear indication of a square peg wedged into a round hole, and for 24 hours a day, seven days a week, the New Garden Police Department does just that.

The reception area for visitors is the size of a walk-in closet. The walls that separate an administrative office from an incarceration interview room are as thin as a slice of bread. There is one bathroom that is shared by everyone who works there, visits there and is arrested there, meaning that an administrative assistant shares the same facility as a common criminal.

The lone female police officer's locker is in the same room as storage units filled with investigative materials and evidence.

While other area police units conduct their business in contemporary and spacious facilities, 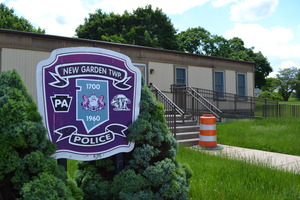 New Garden's offices are a source growing frustration for the 16-member unit. The space was pulled together haphazardly last December to house the department after its former facility, a 4,600-square-foot trailer, was closed due to an infestation of mold.

The concept of moving the department to a larger, more efficient home in the township has been tossed around like a rubber ball for years between township supervisors. Although Police Chief Gerald Simpson has openly and repeatedly expressed the need for a facility in the neighborhood of 8,000 square feet, any go-ahead on the project has been stalled, largely due to the cost of building a new facility, which some estimates have placed in the $2 million-plus range.

Thanks in large part to the work of a former supervisor, however, a possible vision for a new police facility is now in the works.

The "New Garden Police Facility Business Analysis," prepared by former New Garden Township supervisor Bob Norris and Simpson, spells out the issues, costs, timing and options in determining how to permanently house the township's police force. Presented to the Board of Supervisors in early May, the report outlines ideas for a new facility based on the growing needs of the department over the next five, 10 and 20 years.

"The issue is not, 'Do we build a new police building?'" Norris told the supervisors at the beginning of the presentation. "The nature of the current facility is that it is temporary. I think the real tough questions we need to ask is how do we and when do we [build a new police facility], and how the heck are we going to pay for it?"

One of the major initiatives in the study involved Norris and Simpson visiting seven other police facilities and speaking with law enforcement officials about the needs for their units.

"We used them to understand more about our process and what New Garden may want to take a look at it, based on others' successes and failures," Norris said. "We spoke to police officers to get their input on what may be most appropriate for New Garden moving forward."

"I wanted to give Mr. Norris the option of seeing what other facilities looked like, in order to get a broader scope, hoping that a common theme would be obvious when we were done, that common theme being that the facility fit the function of the organization," Simpson said.

Based in part on these visits, Simpson and Norris determined that the key requirements for the New Garden Police Department will be a public and administrative area that is at least 1,000 square feet; that the police operations area be at least 2,700 square feet; and that the hard area -- the space used for holding cells, DUI processing, interviewing, processing and two sally ports -- be at least 1,100 square feet in size.

An area of particular interest during their tour of other police facilities, Simpson and Norris said, was in what evolving technology was being used. Based on their findings and the future needs of the department, they said that the "wish list" of the planned location would include video cameras in the public area and the exterior and interior of the building; audio and video recording in all hard areas; webcast audio and video to allow two-way teleconferencing; a multi-tiered electronic facility access system; a sally port and garage that is wired for emergency use and isolation of prisoners; a live electronic laser for fingerprinting; as well as an off-site backup server.

The need for a larger barracks is not just based on technology, but on personnel as well. In order to fully provide police protection for a township that is expected to grow in population over the next few decades, the study projected that the department could be at 27 full-time employees -- which includes a chief, sergeants, corporals, a patrol officer and administrative personnel -- by 2029 and 2034.

While Simpson and Norris impressed upon the supervisors the need for a larger and permanent police facility, two white elephants surfaced, as they have since the idea of a new police facility in the township first arose years ago: Determining when and where the shovel hits the ground, and finding out how to pay for it.

The report provided three potential options for the new facility, as well as positives and negatives for each option:

1. Build a new facility at the current location on Route 41, or at the corner of Newark and Starr roads (near the township building);

2. Renovate an existing building in the township; or

3. Retrofit the new police facility in the lower level of the township building on Starr Road.

Building a permanent facility at its current location, the report said, would allow the police to continue to use the same site, which is an already-known location; as well as continue to have the use of its police communication tower and other police utilities, which are already on site. The negatives are that the site may not allow increased parking for police departments in the future; and that the space would likely require a zoning appeal for exceeding an existing impervious surface.

Constructing a department in an already-existing location would also be less expensive than building an entirely new facility; and moving there would be quicker. The "cons" of this option would be that retrofitting the building to police standards will add to the project's cost, and require compromise that could affect the department's needs. In addition, it may require relocating the police communications tower.

Although moving the police to the lower level of the township building would allow the department to be near the township's municipal staff and set up a "one-stop" location for township services, the ground floor space is just short of 4,000 square feet, half of what the police department's space requirements would be. In order to maintain this as a viable option, either the current main floor space would have to be rearranged and renovated for use by the police, or a significant addition to the ground floor space would need to be built. The police communications tower may also need to be moved.

There's another potential red flag for joining the New Garden Police Department with the township's governance in the township building. "Suppose everyone is using the same door, and you get some lunatic coming in here, and now you have a threat to the civil servants working on one side of the building," Norris said. "It's a question that needs to be asked."

Using the report's presentation date of June as a starting point, the study projects a 10-step process that will enable the facility to be completed between May 2017 and February 2019, depending on the option. The process, Norris explained, would involve the board reaching a decision by September; a police needs assessment; the bidding and awarding of the facility's design; architectural plans and recommendations; project bidding, construction and eventual completion.

"The reality is that whether its a retro-fit or construction from ground up, you're talking somewhere around $3 million," Norris said. He spelled out several options that could finance the new facility, which included reallocating current township revenues; soliciting donations from interested parties; applying for grants; securing loans or bond paybacks with tax revenue; increasing real estate taxes in the township; or instituting a local services tax.

While the report encouraged the supervisors to exhaust each of these potential revenue sources, it spelled out that the primary revenues would come from an increase in real estate taxes and establishing a local services tax. Calculated, the net increase in revenue from a local services tax -- which can tax anyone who works in the township $52 every year -- would raise $240,000 annually. If the tax was used to pay for a new police facility that would cost about $3 million, the construction costs for the building would take approximately 10.4 to 14.6 years to pay off.

In conclusion, Norris and Simpson encouraged the supervisors to make a decision about which option to choose by September; employ a firm to conduct a police needs assessment [estimated at about $30,000]; review the report's findings; determine the costs for the new police facility and its financing methods; hire an architectural firm and a project manager, and begin construction of the facility by 2016.