The food run makes its way into Oxford.

The Dwight Wallace Memorial Motorcycle Food Run has grown to the point where, when all the non-perishable foods and disposable diapers are dropped off, the Oxford Neighborhood Services Center’s cupboards are full. 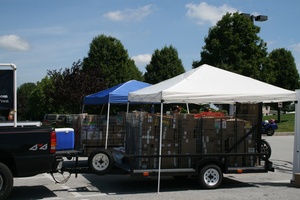 Last year, the Chester County chapter of ABATE delivered the equivalent of six or seven pickup truck loads of food to the Neighborhood Services Center—so much that the streets had to be blocked off for a few minutes so that the collections could be safely dropped off.

The Chester County chapter of ABATE will be holding its 25th anniversary food run on Saturday, July 5.

“The food contributions we make each year help 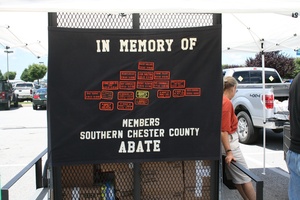 feed many of the people in the southern end of Chester County who are unable to provide for their families,” explained Jesse Reed, a 25-year-member of the Chester County chapter of ABATE. Reed has been the chairman of the food run for the last nine years. He has seen it grow from an event that had 15 or 20 people helping out to one that has more than 75 participants.

“Every little bit we collect helps people who need help feeding their families,” said Reed, a Rising Sun resident who lived in the Oxford area for more than 40 years. 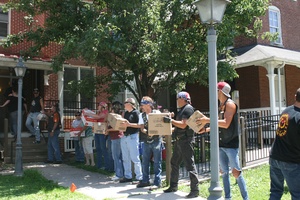 The food run is dedicated to the memory of all fallen members of the chapter and is named in honor of Dwight Wallace. Reed explained that Wallace was killed on June 30, 1988 when a car crossed over the yellow line and struck him. The following year, members of the Chester County chapter of ABATE, which was only a year old at the time, started the food run in his memory.

Arta Mae Thomas, Wallace’s mother, is a volunteer for the event, and she helps during the food run. 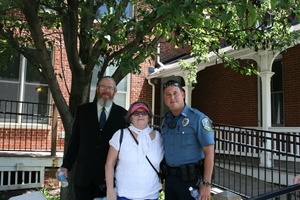 collection point at the Acme in Avondale from 8 a.m. to 5 p.m.  On June 7 and 8, the collection point is the Walmart in Oxford, and then it moves to Redner’s on June 14 and 15. The last collection before the food run takes place at the Oxford Acme on June 28 and 29.

Reed said that anyone interested in volunteering for one of the food drives should contact him at 443-553-4549.

“We also ask that everyone check the food shelves at home and if you have unexpired non-perishable food, bring the items to the collection locations,” Reed said. “I’m the first one to clean my closets out.”

On the day of the food run, the group will gather in the parking lot of the Shoppes at Jenner’s Village at the intersection of Route 796 and Old Baltimore Pike. They will depart at 1 p.m. and deliver the food to the Neighborhood Services Center. The Oxford Police Department will meet the caravan at the borough line and provide an escort for a short parade through town that ends at the drop-off point.

Donating the food is always the best part for Reed. He likes the idea of helping others.

“This is my way to give back to the community,” he said. “Bikers have a big heart. This is what we’re all about.”

After the food run, the Chester County chapter of ABATE will be holding its annual picnic. Anyone participating in the food run is also invited to attend the picnic.

“This event is open to everyone,” Reed said. “You don’t need to ride a motorcycle. You don’t need to be a member of Chester County ABATE of Pa. This is not just ABATE. This helps the whole community. I’d like to see more people get involved.”

For more information, visit www.chestercountyabate.org or email Reed at wizard13@zoominternet.net.

May is Motorcycle Awareness Month

Pennsylvania Gov. Tom Corbett has proclaimed May as Motorcycle Safety & Awareness Month. There are 854,493 licensed motorcyclists in the state. During the month of May, ABATE will continue its advocacy of motorcycle safety and awareness by placing 25,000 custom-printed lawn signs in high-visibility areas. The signs will read, “Look twice—save a life—watch for motorcycles."