Stories illustrate the importance of the Lighthouse Youth Center In a room filled with Lighthouse Youth Center supporters, on an evening dedicated to the positive impact that it has had on the Oxford community, there probably wasn’t a need for a reminder about how the services available at the center have helped so many youngsters during the last 26 years. 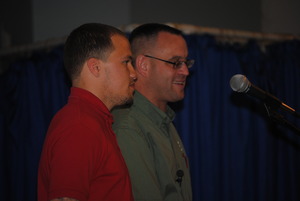 But several youngsters offered their testimonials anyway, and everyone was reminded how volunteer or financial contributions made to the Lighthouse ripple throughout the community.

“The testimonies really tell the story of the Lighthouse,” said executive director Buzz Tyson. “It continues to change lives. Your support and your prayers continue to help us.”

Tyson introduced each of the youngsters—Tyler 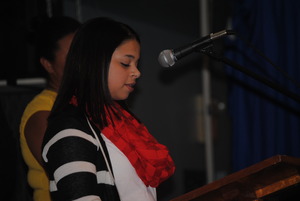 Good, Liz Walleigh, Alexis Rivera, and Quinsha Wilson—who were eager to share their stories with the approximately 320 people who attended the Lighthouse Youth Center's spring banquet at the Bethany Christian School on April 24. Some of those in attendance have been supporters of the Lighthouse since members of the Oxford Ministerium first started talking about and praying for a facility that would help the youth in the area back in the mid-1980s.

Good, now 22, recalled that he was going to the Lighthouse for after-school activities “for as long as I can remember.”

He said that Lighthouse staff members and other youngsters were like family members, and helped him in many different ways as he grew up. Lighthouse program director Doug Richner helped him get his first car. 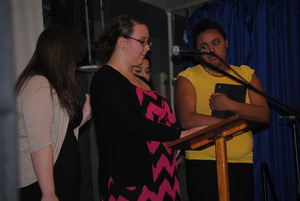 Today, Good is employed at Shelton Pallet Company in Nottingham, and is leading a successful life. He has worked there for the last four years, and was recently able to replace that first car with a new one.

Good said that he has fond memories of spending many afternoons at the Lighthouse. So does Wilson, who has served as a junior volunteer at the Lighthouse for the last four years. Wilson, a senior at Oxford Area High School who will graduate next month, now works with the younger children who come in for meals, help with homework, or to enjoy other activities.

“I have always enjoyed going to the Lighthouse,” Wilson said. “It has kept me off the streets and out of trouble.”

Walleigh said that the staff members and the other children at the Lighthouse were like a second family and the Lighthouse itself is a second home. She is also a senior at Oxford High School and volunteers at the Keystone Animal Hospital.

“I’m so happy that the Lighthouse is there for me,” Walleigh said.

Rivera, who is now 18 and a senior in high school, said that one of the most important aspects of the Lighthouse is that youngsters can talk to the staff about their problems.

“A lot of the kids who go to the Lighthouse feel alone,” she explained.

Rivera shared that she was able to depend on the Lighthouse at a time when her family was going through a difficult time.

“Thanks to the Lighthouse,” Rivera said, “I still believe in myself.”

In addition to the testimonials, a video highlighting some of the programs and activities at the Lighthouse was shown, with an emphasis on the planned opening of a new building on Commerce Street. The fundraising effort to raise money to pay for the new home is called Project Blessing, and in the video Ed Herr, the president of Herr Foods and a longtime Lighthouse board member, noted that the project is certainly living up to its name.

Kathy Book, also a board member for Lighthouse, said that when they move into the new facility there will be a need for even more volunteers. These volunteers benefit as much from the experience as the youngsters.

One volunteer said that children are “gifts from God,” and whenever she volunteers at the Lighthouse the children fill her with energy.

Another highlight of the spring banquet was when the Lighthouse choir singers performed “Tis So Sweet,” “Grateful,” “Amazing Grace,” and “This Little Light of Mine.”

Richner said that the choir normally practices twice a week in preparation for performances that take place about once a month at local churches. The choir also performs at fundraising events like this one, showcasing just one of the activities that youngsters can enjoy when they visit the Lighthouse.

Tyson said that the banquet raised $55,005 for day-to-day activities at the Lighthouse and another $5,855 for Project Blessing.