Andrea Anthony (right) with her daughters Marissa and Gianna during the first fundraiser.

The Oxford Golden Bears cheerleading team hasn’t had new uniforms in eight years, so volunteers are organizing a series of fundraising events to offset the cost of buying new uniforms. 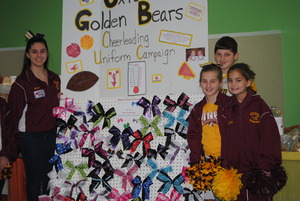 “We’ve talked about getting new uniforms for a couple of years,” explained Andrea Anthony, the cheer director for the Golden Bears. “We want to dress these girls with outfits that show how important they are to the organization.”

Anthony said that they hope to raise approximately $10,000 to purchase 100 new uniforms for cheerleaders. The organization is facing a June 1 deadline to place the order so that they will be ready for the upcoming season. The uniforms include a vest and skirt.

“We’re hoping that number goes up a little,” Anthony said.

She said that the hope is that everyone in the Golden Bears family, including former and current players and cheerleaders, will support the fundraising efforts.

“We need the help of the community, including anybody who has been a part of the Oxford Golden Bears family,” she said. “These are young athletes who rally to get crowd participation at games.” 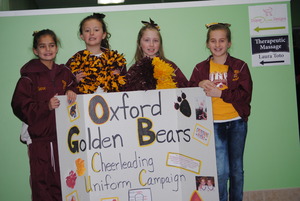 participate in football and cheerleading. Anthony has daughters, Marisa and Gianna, who cheer; and a son, Michael, who plays football.

Marisa and Gianna helped Anthony make bows that were sold at the first fundraiser on Feb. 7, when volunteers were stationed at Oxford’s First Friday event. Parents in the organization also made baked goods that were sold to raise money.

Anthony said that two youth cheer coaches, Mary Sitley and Paula Pechin, are serving as the co-chairs of the fundraising campaign and are helping plan the fundraising events.

“I have two wonderful ladies helping me out,” Anthony said.

In the coming weeks, the organization will be staging car washes, bake sales, a multi-family yard sale, and other events to raise money. The Oxford Golden Bears Community Yard Sale is set for Saturday, March 3 from 8 a.m. to 2 p.m. at the Elk Ridge School.

On Friday, March 28, there will be a Spring Fling Dance at the Redman's Pavilion from 6 p.m. to 9 p.m. The dance is for boys and girls in grades one through six. Tickets are $20.

On Friday, April 11, there will be an open gym night at the O-Xtreme Tumbling.

The Golden Bears will also be holding a Wawa hoagie fundraiser, with $5 vouchers good for a Shorti Hoagie. Coupons can be purchased every Monday night in March from 7 p.m. to 8:30 p.m. at Pat's Pizza in Oxford.

There is also talk of a parents-night-out event where some of the youngsters in the organization would volunteer to babysit children at a central location so that parents could drop their children off for a few hours and enjoy a night out.

“We’re also going to be asking for help from businesses and organizations,” Anthony said. “It’s a huge effort. We’re going to rely on the families in the organization and the community."

The Oxford Golden Bears organization is planning a series of fundraisers to help raise money for new cheerleading uniforms. More information, including a link to make an online donation, can be found at www.oxfordgoldenbears.org.