A representative from National Grid attempts to restore power to a power line on Fairville Road in Kennett Township on Feb. 9.

A devastating storm that swept through Pennsylvania last Wednesday, blanketing Chester County with half an inch of ice, caused a whopping number of power outages in the five-county area serviced by the Philadelphia Electric Company. Outages affected more than 200,000 PECO customers in Chester County, of which more than 2,000 are still without power. 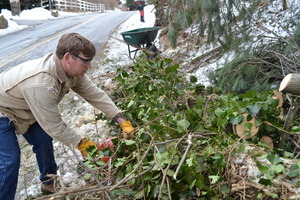 The Feb. 3 storm affected 623,000 PECO customers in Bucks, Montgomery, Delaware, Philadelphia and Chester counties, accounting for 80 percent of all PECO customers. Over the course of the last week, the company’s website experienced 4.5 million page views, and the customer care center fielded more than a million calls.

As of Feb. 11, however, the largest number of customers still without power are in Chester County. According to the PECO website, while PECO has been able to restore power to 209,000 customers in the county, 975 still remained without power. This number is by far the largest of PECO's trouble spots.

In the aftermath of the power outages, the American Red Cross of Southeastern Pennsylvania established shelters in Exton, and at Avon Grove High School in West Grove. Meanwhile, thousands of individuals and families in the county either sought shelter in the homes of friends, family and neighbors, or used generators.

In response to the historic storm – the second worst in company history -- PECO deployed a 6,800-member team, which included employees, contractors and workers from utilities in Canada and across the country, including crews from the company’s sister utilities, ComEd in Chicago and BGE in Baltimore, and others from Alabama, Arkansas, Massachusetts, New York and Ohio.

If Chester County was the epicenter of the power outages in the past week, then the rural, tree-lined roads of Kennett Township may have been its Ground Zero point. As of Feb. 8, about 1,600 township residents were still without power, five days after the storm. Those without power contacted a PECO hotline, and many have reported their frustration about notifications that told callers that power would be restored at a certain day and a hour, only to prove inaccurate.

On Sunday morning, Fairville Road was a virtual roadblock of out-of-state power service vehicles and tree cutters, all of whom attempted to restore power to the area. Twelve representatives representing National Grid, a power and gas company that delivers service to 3.3 million customers in Massachusetts, New York and Rhode Island, attempted to fix damaged power lines as temperatures hovered in the low 20s.

"The fact that the trees haven't been trimmed, as well as the heavy ice load, caused these white pines to break off and these wires to all come down," said Michael P. Peters, a supervisor of electric operations for the company, who was part of a six-unit contingent from upstate New York.

By Sunday afternoon, National Grid had finished work at Fairville Road, and were following the  tree cutters toward Center Mill Road. "As they clear the trees, we're putting the wire in and repairing the cross lines," Peters said.

As the National Grid workers repaired lines at Fairville Road, Kay Young, who has lived on the road with her family for the past 15 years, was watching. She and her family had been without power since Feb. 3, and their main source of heat had been a fireplace in the family room. For several days, the family hung blankets over doorways to keep the heat of the fireplace in the room. Young seemed resigned to the temporary fate that the storm had brought.

"Most of my family has been showering at the YMCA in Kennett Square," Young said. "We have no heat, and we bring food in. You cannot expect immediate service with a situation as widespread as this. We're fine. We're not going to freeze to death."

Other township residents were not as accepting of the delay. One township resident, who chose not to be named, said that the problem lay with the number of exposed telephone and power wires clearly visible in the township.

"We're frustrated because of our neighborhood of about 22 homes has underground wires, and we lose electricity all the time because we're attached to another grid," she said. "Because of this, we were out of power for 40 hours, got electricity back for about 20 hours, and then we lost it again for about a day and a half."

Although a recently installed generator has helped provide some power in her home, a lot of her friends and neighbors didn't have generators. She said that her family had taken in a few area residents over the past week.

"A lot of people are very, very frustrated and struggling," she said. "When everybody else has wire issues, it still takes us down. All of the wires in this township should be underground. They spend a fortune cutting back the trees, and they make them look horrendous. They can spend a fraction of that money on underground utility wires and be done with it."

In an effort to keep township residents informed, Kennett Township manager Lisa Moore sent an electronic letter to residents on Feb. 8. In the letter, Moore wrote that she had participated in a conference call with PECO representatives, who said that their top priority during the outage was to restore service to schools and medical centers -- namely 26 schools, two long-term health care facilities, a senior center, as well as pump stations and radio towers.

"PECO is focusing on restoring power to the most populated areas first, after the health care centers and schools are restored," the letter read. "Residents will continue to experience periodic outages in areas of the township. Also, some may notice that your neighbors have power and you don't. This will occur until all power is restored.

"Restoration times for specific outages may change frequently," the letter read. "In some situations, an outage may even be reported as restored, when in fact, an outage remains. This is the result of a ‘nested outage’ – additional damage that remains somewhere else along an electric circuit or line after a larger issue has been resolved."

Moore said that she continues to participate in conference calls with PECO and emergency service units several times a day, as well as with Greg Carey, PECO's regional external affairs manager for Chester and York counties.

In a website posting on Feb. 10, PECO wrote that they were continuing to attempt to restore power to the remaining 21,000 customers, and that service will be restored to "a majority of customers" who remain without power. However, the message read, some customers in the most heavily damaged areas will be without service into early this week.

Chester County could very well replay the same power outage scenario this week. The National Weather Service is reporting that a strong coastal storm is expected to reach the county beginning Wednesday evening and continuing into Friday morning, dumping another 6 to 8 inches of snow, sleet and freezing rain, and leaving as much as a quarter-inch of ice.