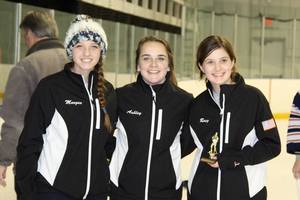 This tournament is unique as the 80 players who were traveling stayed with the Upland host families. “We really like the home stay part. The fact that our girls play and stay with the Upland families is something that they enjoy,” said New Canaan coach, Scott Lilley.

As the buzzer went off at the end of the UCDS vs. Landsdale game, securing the win for Upland, cheers could be heard throughout the whole rink. The UCDS team skated over to give their goalie, Morgan Cullen, a hug, as the game closed with no points being scored on the Upland goaltender. The  captains after the game spoke with huge smiles on their faces.

“It feels really great to have won the tournament. We worked really hard as team,” said Lydia Yeatman. Ashley Miller talked about why the girls were so successful throughout the tournament.

“I think we won every shift and every period, and then {the result is} winning the games. We finally won the tournament!”

The Upland MVPs for the weekend were Miller, Cullen, and Rosy Sieglaff.

For Upland, the rest of the season looks just as promising.

“We have been working really hard in practice, going over a lot of different parts of the game 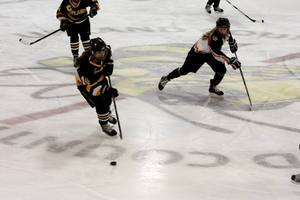 and the team was really able to pull it all together,” said Upland Coach Katie Keeports.

Assistant coach Annie Osborn remarked, “Our confidence is there and we were all working together so I think we’ll have a positive rest of the season.”

This year marks not only the first win for the girls in years, but also a tournament win for the boys as, for the first time since 2006, the UCDS boys team took home the winning trophy.

Coach Court Dunn, who also had his 400th win this year, showed sentiment and enthusiasm.

“We have a great group of kids this year that worked really hard and at Upland when people ask me what I’m most proud of, I say the fact that our kids work so hard.”

Nicke Valde, Topi Orpana, and Sam Schluter were awarded as MVPs of the tournament. 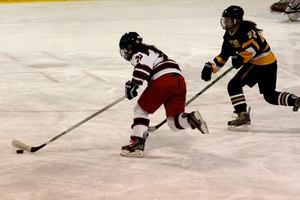 On Jan. 18 and 19, Upland hosted the oldest junior school ice hockey tournament in North America, the 40th Annual Boys Invitational Ice Hockey Tournament. With only twelve members of the team, and only a few ever having played hockey before, the boys emerged as the true underdogs.  Two boys who were new to the sport were the Finnish exchange students.

“It was one of the best hockey experiences I have ever had. We don't have school sports in Finland, so it was great to win something with all of our friends,” said Topi Orpana.

Nicke Valde echoed the sentiment with, “I think I am going to remember this moment for the rest of my life.”

A banner will be hung in the John M. Cleveland Rink marking the names of the UCDS team as winners of the 2014 tournament, so everyone else will remember it, too.

Many alumni came out to both tournaments to celebrate with the teams. This did not go unnoticed by the coaches who have coached and taught many of the returning alumni.

“It’s a huge deal, not only for the players, but for the alumni who either did get their names on a banner or who did not, they’re all so supportive,” said Dunn.

Alumna Amy Leichliter, a member of the class of 2006, said of the weekend, “It’s great to come back so many years later and see that the spirit and effort is still so high.”