Artist Paul Scarborough was one of the exhibitors at last summer's Plein Air Exhibit at the Chadds Ford Gallery.

Paul Scarborough, whose landscapes of the Brandywine Valley were instantly recognizable to his many loyal collectors and fans, died early Monday morning at the age of 69. 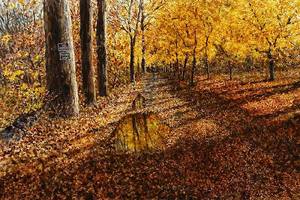 Scarborough was a self-taught artist who exhibited both regionally and nationally for more than 30 years. His works hang in private and public collections around the world. He was once commissioned by NASA and his work hangs in the National Air and Space Museum. His works were offered as best-selling prints, and he was a regular contributor to local shows, such as the Chadds Ford Elementary School Art Show. He was a longtime exhibitor at the Chadds Ford Gallery, where his work will be part of a show opening on Feb. 7 called “Energy.”

Known for the detail and sense of light in his tranquil scenes, Scarborough also put a tiny red cardinal into most of his works as a kind of signature presence.  He painted on site throughout the Brandywine Valley, and he was a frequent visitor to area galleries and art openings.

Scarborough tended to be modest about his accomplishments, and his biography on the Chadds Ford Gallery website doesn't resort to listing awards and collections of his work. Instead, he wrote of his love of being outdoors:

I become very aware of

how fortunate I am

Time to enjoy the woods that surround me

I walk looking down at the

shadows of the sapling trees

As they fall in front of me

Suddenly this quiet is broken by

the squawk of a cock pheasant

The call of the free flying crow

This feeling can only be related to others

Alone here I can only say

how fortunate I am.

Scarborough had cancer surgery in the fall of 2013. He is survived by his longtime companion Barbara Moore, director of the Chadds Ford Gallery, her children and grandchildren. Funeral arrangements were incomplete at press time.