According to Matthew Schlott, who has nearly four decades of experience in the restaurant industry, a good restaurant can quickly become a familiar and comfortable place for guests to visit—a place filled with shared experiences and fond memories. 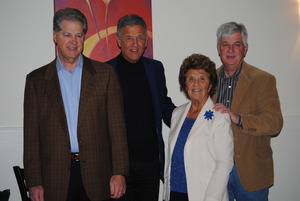 Downtown Pasta officially debuted on Jan. 21, but guests stepped through the doors of the new restaurant for the first time at a preview event on Jan. 15, the first of several activities leading up to the grand opening.

Schlott is the general manager of Nottingham Inn, LLC, and for the last three years he has overseen the extensive renovation of the Herr Foods-owned restaurant, hotel, and creamery. The loyalty program for the 47-seat Kitchen and Creamery has tallied more than 4,000 members in the last two and a half years thanks to a menu of American heartland cuisine that is made with the best ingredients from local farms and dairies. Downtown Pasta represents the newest addition to the family of businesses, and everyone involved is committed to seeing that the endeavor is as successful as the relaunch of the Nottingham properties.

“We look at this as an investment in the social life and community of Oxford,” said Ed Herr, 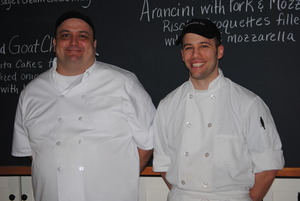 The involvement of the Herr family certainly bodes well for the long-term success of the new restaurant. 306 Market Street has long been the address of Oxford's most unique restaurant—both Peppercorn's and Muse were located here and made a valiant go of it before closing down.

“It will be a broad-based menu,” Schlott explained. “I’ve worked with a great team to develop the concept and the menu. We’ll have a menu that has small plates, salads, and specialty entrees. We wanted to make sure that we have a restaurant that fits the community. We wanted to have food that is affordable and familiar, and pasta does that.” 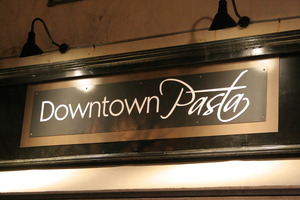 While “pasta” is in the name of the restaurant, the offerings are much more diverse than the name suggests. Entrees include a rich, braised short rib presented with creamy polenta; a fettuccine portabella plate with fresh mushrooms and rich Alfredo sauce served over artisanal fettuccine ; oven-roasted beef tips with vegetables and an artisanal pappardelle; seared 10-ounce New York strip steak served with whole garlic and tomato sauce presented with a side of pasta; seared dry scallops; shrimp & pea risotto; and chicken breast and vegetable orzo.

Schlott said that refining the menu will be a never-ending process.

“Restaurants are the most Democratic institutions that we have,” Schlott explained. “People vote {with their menu choices}. If it's on the menu and it sells, it stays on the menu. If it doesn't sell, it won't be on the menu for long. We'll re-write the menu as much as we need to, we'll make the adjustments. Every dish has to work on a couple of different levels. The guests are going to tell us who we are as a restaurant.”

Downtown Pasta is a BYOB, but guests of the restaurant can order wine at Flickerwood Wine Cellars, which is just a short distance away on Third Street, and enjoy it with their meal. There are wine menus at each table.

“We think that wine really fits this restaurant so being able to work with Flickerwood is a real benefit. It’s just tremendously convenient,” Schlott said.

Schlott said that Downtown Pasta will follow the lead of the other Nottingham Inn facilities by emphasizing good service—doing so is more important than ever in the restaurant industry, and surveys show that people choose to eat in restaurants where they feel a personal connection.

“We want people to feel like regulars the first time they come in,” Schlott said.

He has assembled a staff of approximately 35 men and women who will be charged with making guests feel like they are part of an extended family.

“You have to hire people who are sincere and who can make connections,” Schlott explained. “We're so pleased with the staff that we were able to bring in—the tremendous quality of the people. The biggest key to success is building a great team.”

Part of the team is Molly Callaghan, who is assisting with the opening of Downtown Pasta after also helping with the debut of the restaurant in Nottingham. She has 24 years of experience in the restaurant industry, working in all aspects of the business, and has opened restaurants in large cities. She said that she has really enjoyed getting to know the residents of Oxford and Nottingham.

“The people here are so nice and genuine,” she explained. “It's been such a rewarding experience.”

Callaghan said that the goal is to give guests a more personal experience than they can get at a chain restaurant.

According to Schlott, affordability and familiarity are very important in the restaurant industry, and he wants people to consider Downtown Pasta a home away from home.

“I want people to find a comfortable rhythm with the restaurant,” Schlott explained. “It has to be affordable so that customers come in two or three times a week. It will feel comfortable because it will have a bistro-style atmosphere. We’re not interested in transactions; we’re interested in relationships.”

Ed Herr said that with Schlott overseeing the restaurant's operations and with Crystal Messaros, a Herr family member, ensuring that the culture of the restaurant matches the family's other businesses, he is confident that they are creating something that the entire area can be proud of.

During the preview event, Downtown Pasta earned the endorsement of the Herr family's matriarch, Miriam. She and her late husband, James S. Herr started the family business in 1946 and steadily grew it during the ensuing decades. Miriam said that she found the new restaurant to her liking.

“My first impression of it is that it's very welcoming,” she said. “I think it's going to be a very friendly place.”

Miriam added that while she could not have imagined that her family would one day be in the restaurant business because it's so competitive, she is very pleased with the expansion into the hospitality industry and the positive effect it can have on the community.

“It's another branch of the company, and I'm proud of them for attempting to grow the community along with the other nice places that are in town,” she said.

Schlott said that everyone involved is enthusiastic that Downtown Pasta will be debuting in a business district that recently added Flickerwood Wine Cellars Tasting Room and a renovated Octoraro Hotel & Tavern.

“We hope that we're the first of many new businesses,” he said. “If we can have success, it will showcase how great a downtown Oxford can be. We're hoping that we're a the beginning of a renaissance in the downtown.”

“Our whole goal with this project,” Ed Herr explained, “is to be a blessing to Oxford. But I feel like it’s been turned on us because it is Oxford that has been a blessing to us."