Three experts on school safety served as guest panelists at the "What Makes Schools Safe?" seminar held Dec. 7 in Wilmington. The event was sponsored by WHYY and moderated by WHYY's Chris Satullo, far right.

As the nation nears the one-year anniversary of the school massacre at the Sandy Hook Elementary School in Newtown, Conn., the national conversation of making our schools safer has become a hot-button topic in recent weeks. Ideas, opinions and possible solutions are being tossed around locally as well, and last Saturday morning's three-hour panel seminar in Wilmington gave added insight into the discussion. 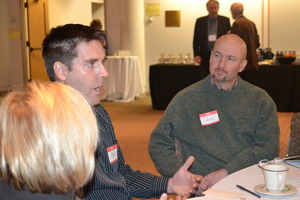 “What Makes Schools Safe?” -- sponsored by WHYY's Newsworks.org department and held at the University of Delaware's Arsht Hall – drew more than 100 concerned parents, students and school administrators who heard three experts address topics that ranged from arming teachers with guns and cyber bullying to how schools can be re-designed in order to stave off potential shooting incidents. Moderated by Chris Satullo, WHYY vice president for news and civic dialogue, the panel included Dr. Anthony Semone, a forensic and police psychologist; Dr. Raymond Lorion, dean of the College of Education at Towson University; and Lt. Frank Borelli, a certified active shooter and firearms instructor, and the author of several books and articles on law enforcement.

Framing the discussion around whether or not our schools are truly safe, the panel devoted much of their conversation to both pointing the finger of blame for school violence at several institutions while tossing out possible solutions. Using the backdrop of past incidents at Sandy Hook Elementary and Columbine High School as examples, the panelists agreed that the worst form of violence being perpetuated in the nation's schools is not one that can be detected through a metal detector, but bullying brought to the internet, and adults are doing very little to help solve the problem.

"What happens in a bullying episode happens school is one thing, but when it goes viral, it's another thing," Lorion said. "What we've seen in the last five years are a number of victims whose act of violence was against themselves.

"If there is anything that is a common factor of those who engaged in school violence, that there was their experience of being bullied and harassed," Lorion added. "When you look at the bullying literature, what you discover is that a substantial number of children are bullied, but that a small minority of adults -- teachers, parents and administrators -- believe they should intervene. They have a sense that these are things that kids should work out on their own. Seven out of 8 children who are the victims of bullying don't expect the adults to help them, which perpetuates a feeling of helplessness among children."

During his 25 years in police and forensic psychology, Semone said that he sees similarities in the personalities between the common school bully and a violent criminal, caused mostly by a disintegrated family system.

"In these cases," he said, "what was consistent is that families were often without a father figure, or at best, a male presence of a shuffling in and out, and an over-extended mother. As a result, the youngster grows up in a world without respect for boundaries, nor an appreciation for proximity in relationships, because there has been no one to teach the bully about the value of boundaries."

A solution to bullying in schools, Lorion said, is to remove the bully's “audience.” The bully gets social rewards by engaging these tactics, but without an audeince and reinforcement, the bullying often stops, he said.

Who are the bullies these days? Not just the students, Lorion said, but parents can as well, and not only to their children, but to their teachers and administrators. “Affluent parents tend to know the mayor, the city council, and the school board, and they constantly threaten teachers," he said. "One of the last doctoral dissertations I was involved in was about teachers as victims of cyber bullying, and the primary proponent of that were the parents.”

The largest complication in school bullying, Borelli said, is the huge breakdown in communication and expectations he sees between schools, communities and law enforcement professionals called to respond to incidents.

"A mutually-empowering and on-going training is almost non-existent," said Borelli, who served as a police officer for 30 years. "Police and schools are taught limited set of tactics and the parents are often left in the dark. There is no group approach for those responsible for the children."

The bold steps needed to make schools safer, Borelli said, can only be made when everyone associated with a school is held accountable, "from the kindergartner, to the teacher, to the janitor, to the principal, to the superintendent. This is not a new problem. It's an accelerated problem."

Another key talking point in the issue of school violence is the controversial zero-tolerance policy in effect at many schools, which punishes any infraction of a school rule, regardless of extenuating circumstances. Supporters of the rule claim that such policies create a more appropriate environment, while its detractors believe that it punishes minor incidents. One of those possible infractions, Borelli said, happens when a victim decides to defend himself or herself against a bully.

"It teaches them not to defend themselves," he said, "to willingly accept themselves as a victim."

The largest headlines related to school violence and shootings may have taken place in recent years at suburban schools, but school violence of a different kind takes place every day in inner-city schools, defined by its own set of demographics and circumstances. In a suburban school, Lorion said, shootings are sometimes measured according to a “score,” similar to violent video games that influence a student. The inner-city students, on the other hand, perpetuate violence usually as a measure of retaliation.

Since Sandy Hook, the national conversation addressing school safety has also included changing the physical plant of school buildings, in order to make it nearly impossible for a potential shooter to enter a school. Semone faulted Sandy Hook Elementary for not installing bullet proof glass in its entrance which, if installed, may have slowed the shooter down.

"Schools are soft targets," he said. "How about hardening the target, making it more difficult? There is nothing to slow a guy down. There are no artificial barriers to slow down progress. Ask yourself what ordinarily exists within the contexts of the school that a teacher or custodian or psychologist could make use of in the event of an attack -- improvised weapons such as fire hoses and sprinkler systems."

Semone also suggested reversing the position of doors in a classroom so that the first person that a shooter would see would be the teacher and not the children.

Lorion rejected Semone's suggestion, saying that targeting large amounts of money to prevent what is essentially an incredibly rare event is unwise. "For its entire history, Sandy Hook Elementary was an unbelievably safe place, and the vast majority of schools across the nation are unbelievably safe places," he said. "If you spend a hundred million dollars making schools absolutely safe from all potential events that you can anticipate, those are hundreds of millions of dollars you're not spending on education."

After small group sessions with attendees, which were moderated by members of the University of Pennsylvania Project for Civic Engagement, the panelists were asked to answer questions posed by the audience -- some of which asked the panelists for potential solutions.

Lorion said schools should encourage its teachers to sit down one-on-one with each of their students, in order to find out who they are, how they want to be called, and what they do when they are not in school. “It's important to ask them, 'What do you want to learn this year?'” Lorion said. “I want to change their sense of their relationship with students.”

Semone suggested that in cases of persistent bullying, that everyone be brought together in the same room to address school bullying, but in many cases when he has tried policies  like this, parents do not make the time to participate, and that the problem can get lost in bureaucracy.

“So long as school systems keep looking to keep identifying the issue from three centimeters to the right of the earlobe, the whole problem gets missed,” Semone added. “That's part of the problem I have with special committees that generate 1,400 pages of test scores that don't address the problem that's going on with the kid. It needs to be addressed on the basis of what emerges from the contact you make with the relevant parties. What the teachers and the parents find is often the most acceptable solution to the problem.”

As for solving the problem of school bullying, Lorion said that schools need to empower the children to "set the rules, and talk about the rewards and the consequences. The worst part of bullying is in its denial. If you've got the adults not preventing it from happening -- if you've got students saying that it's okay to circulate a photo of a semi-nude 11 year-old girl on the internet -- then you don't solve the climate of the school."

The panelists' opinions varied on the topic of arming teachers and administration. Although he said that no one should be forced to carry a firearm in a school, Semone said he would volunteer to do so. “I don't think that we should deny children's safety," he said. "A good Glock 17 and 34 rounds of ammunition goes a long way.”

Borelli said he is in favor of arming individuals in schools. "The only way you stop someone with a gun is through somebody else who has a gun," he said. "If you lock down a shelter in place, you're waiting for a police officer to arrive and shoot somebody, if the need arises.  If you have responsible trustworthy adults who are willing to accept the responsibility and the sacrifice of being armed, I think you're doing everybody harm by telling them 'No.' Why would anyone deny a potential safety blanket?”

In the wake of the Sandy Hook shootings, several school districts throughout southern Chester County have begun both private and public dialogue on school safety. The Unionville-Chadds Ford School District has held a number of activities, including well-attended Community Conversations, which have brought teachers, administrators and parents together.

John Sanville, the superintendent of the Unionville-Chadds Ford School District, attended the event with U-CF School Board member Eileen Bushelow.

"School safety is an incredibly complex issue," Sanville said. "It's one that many people feel emotional about, and it's these emotions that have made it difficult to come up with the comprehensive plan on safety for the district, which the board will take action on in January."

Kelly Davenport, a parent of children in the Unionville-Chadds Ford School District and a school administrator in Philadelphia, also attended the event.

“The good news is that we all have a stake in this, but the bad news is that how each of us defines safety is a relative thing," she said. "We are all willing to fight for safety, but there's no one way to solve this. We're going to have to do it in small cohorts, more so on the local level than the national level."