This 1963 newspaper photo shows Rev. Anderson Porter (seated, lower left) during the planning of a bus trip to the March on Washington.

It has been 50 years since Rev. Martin Luther King, Jr., stepped onto a podium on the steps of the Lincoln Memorial and told the crowd of some 250,000 people, "I am happy to join you today in what will go down in history as the greatest demonstration for freedom in the history of our nation." 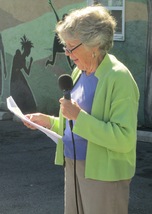 In the following few minutes, King read from a speech and then launched into an impromptu call for social justice that galvanized the civil rights movement. To mark that Aug. 28, 1963, about 50 people gathered in Kennett Square on the morning of Aug. 24 to remember King's words and his call to action.

"Still Overcoming: 50 Years Later" was sponsored by the Church of the Open Door in Kennett Square and the MLK Jr. CommUnity Advocates. Standing in front of the Harriet Tubman mural at State and Willow streets, pastors and community members took turns reading King's "I Have a Dream" speech aloud. Nearby were tables holding petitions to senators and representatives calling for the repeal of the Voter ID act, pleading for affordable healthcare and immigration reform and other issues. The participants signed their names, chatted, hugged one another and joined in singing "Lift Every Voice and Sing" and "People Get Ready." 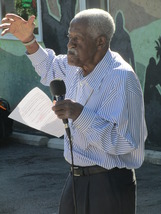 sidewalk up Cypress Street and down East State Street. Passing drivers honked in support and waved as the marchers sang "We Shall Overcome" as they walked.

Taking part in the commemoration were two people who were sitting in the crowd on the day that King delivered his immortal words. Rev. Anderson Porter, 82, brought along a newspaper photo from 1963, showing his 32-year-old self at a table during the planning of a bus trip to the March on Washington. He was the pastor of the Second Presbyterian Chuch in West Chester at the time, and he took two busloads of community members to the march. They arrived early enough to get some of the chairs near the base of the steps, and he was seated about 100 yards from the podium.

"It was electric. It was the most peaceful march you could imagine," Porter said of the mood in 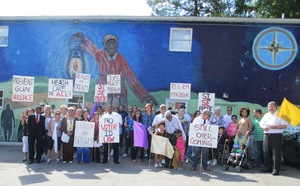 the crowd that day. "Everybody was so kind to each other. The police were ready - they thought there might be a riot, because of all those people. In fact, they urged Dr. King to make his speech short because the people might get overly excited and there'd be a riot. From what I've read, it was Mahalia Jackson who said, 'Tell 'em, Martin. Tell 'em about the dream,' and he put his notes away and it was an impromptu speech. It only lasted about seven minutes, but it was electrifying. We left that day very, very motivated." 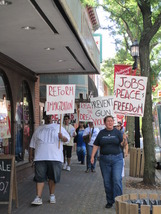 Often lost in the focus on King's speech is the fact that the march itself was for jobs as well as freedom. In the early 1960s, the increasing use of automation in factories was eliminating jobs traditionally filled by African Americans, and the day-long event on the mall included speakers from the United Auto Workers Union, the NAACP and community organizers of all kinds. King's speech was the keynote event, but it came late in the afternoon.

Also at the Kennett Square event on Saturday morning was Cintra Murray, who was working for a Pennsylvania senator in 1963 as a summer intern, and decided to walk to the mall from Georgetown that day to see what was going on. "It was a beautiful, clear day like this," Murray said. "The first thing I remember is hearing Peter, Paul and Mary sing, and then Mahalia Jackson. It was incredible. I'd never seen a crowd like that. It was the first huge crowd I'd ever seen, and probably the last one was Obama's inauguration. I went to that. I don't think I'll do that walk again from the bus," she added, smiling.

After the walk through Kennett Square, the group posed for photos and Rev. Porter closed the 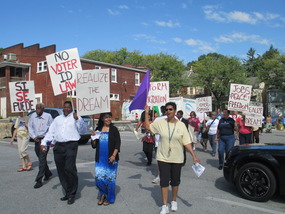 event. "We have a bad habit of procrastinating," he told the crowd. "We get excited, and then as soon as we go home, it's business as usual. … I want you, right now, to dedicate yourself not only to your freedom and your family and your friends, but to everybody, because we are all God's children. God bless you."