A house of straw will be their home sweet home The home under construction at 221 Collamer Drive, north of Oxford, has walls made out of straw bales.

High on a bluff off of Route 896 north of Oxford, there's a house under construction where old building materials are meeting future energy needs.

A first glance, the home that Mike and Judy DeGeiso are putting up on Collamer Road looks much like any home under construction. But then you notice that the walls are made of bales of straw. It's the kind of thing that makes passing drivers slow down for a second look.

"We had a guy come up the driveway yesterday to take pictures," Mike DeGeiso said last week during a tour of the homesite.

"The other day, the Amish families that were coming down the road were turning and looking," Judy added. 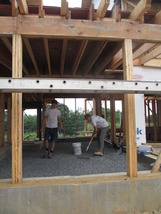 The evolution of what the DeGeisos are calling Two View Acres goes back several years, and is rooted in pure practicality.

"We turned 50 and started thinking about ways to retire, which was to reduce our costs," DeGeiso said. With grown children who are out of the home they currently own in Wilmington, the couple was looking for affordable land in Lancaster County for a year and a half, but found their Chester County property by chance.

"We're always driving on Route 896 and one day, here at this stop sign, we said, 'We've never gone straight here,'" Mike said. "As we came through, there was a for-sale sign on the property. They just wanted too much for it, so we watched it for about six months and finally it went up for auction. We did very well."

The money they saved on the purchase of the land offset the higher taxes in Chester County, so the couple started on their dream house.

Mike, who works as a computer engineer for a pharmaceutical company in Delaware, had been researching sustainable construction methods on the internet as a way of reducing costs for his retirement years. Three years ago, he met Jesse Pellman of Longview Structures LLC, a Lancaster County company that specializes in sustainable building techniques and high-performance housing. Working with plans drawn up by architect Sigi Koko in Ambler, Pa., the DeGeisos designed their home to be as energy efficient as possible - starting with the foundation.

There's as little concrete used as possible, since the production of concrete is a large-scale environmental hazard. The basement has a root cellar which will have a stone floor and a vent that will allow warmer air to escape and cooler air to flow down into the room. This area will be used to store the foods that Judy will be canning. The lower level will also hold the well pump and pressure tank, and the electrical panel.

The main floor will be adobe slabs that are about 900 square feet and six inches deep. That 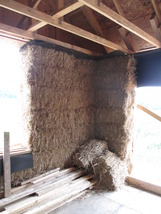 creates some 450 cubic feet of mass what will store thermal energy. In the winter, sunlight from the home's large south-facing windows will warm the home and the floor. At night, the warmth will radiate up through the home. During the summer, the thickness of the home's walls will help shade the windows from direct sunlight. With the floor shaded, it stays cooler, almost like a cave on a hot day.

The DeGeisos will have assistance from a whole-house fan and ceiling fans for the summer, and a masonry heater for the coldest winter months, but they're planning on nature to do most of the heating and cooling. There's a nearly constant breeze across the hilltop where they'll be living, keeping temperatures lower in the summer.

The straw bales are excellent insulation - something like three times better than conventional insulation - and they have the advantage of being very soundproof. The straw is a cellulose fiber "that's more like wood than it's like grass," Mike explained. Since the straw is naturally dry, when they are sealed inside and out, there won't be any condensation inside. A similar straw-mud construction technique flourished in Britain, Pellman said, and there are buildings there that have survived 600 years without a problem. In America, the straw bale technique was used in the 1800s as settlers spread west. There was plenty of straw available, so that's what they used. "I'd say the biggest market now would probably be the Southwest," Pellman said. 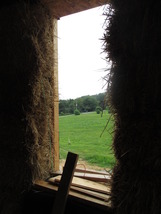 Homes used to be identifiable by where they were built, Pellman added. "If you'd go down South, you'd see the open verandas. You'd come to Chester County, you'd see a certain kind of stone." After World War II, returning soldiers needed homes built quickly, leading to the standardized materials used everywhere. In an era when energy was cheap, walls became thinner and materials were shipped across the nation, making every house quick to build, but not very efficient. It was cheaper to buy more heating oil than build thick walls.

The home being built by the DeGeisos is as locally sourced as possible. The straw comes from a Maryland farm. The wood planks for the flooring come from two trees that fell down in Newark. The couple had them milled into flooring by local millwright and craftsman Greg Flegal. The chemically treated materials that are common in most new construction will be replaced by materials that are entirely natural.

There are several areas of the roof that are flat, allowing for a layer of dirt and plants to be added, further insulating the home and greatly reducing rainwater runoff. The wrap-around porch will also be topped with a living roof. Future plans include a rain cistern, Mike said, to allow the reuse of runoff for watering the gardens where the couple will grow much of their food.

"When we were in Wilmington, we had this little garden that was OK," Judy said. "But now I've 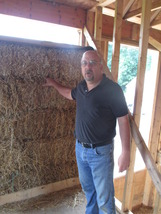 got an acre here that I can work with. We've got the root cellar that's going to be for canning and roots and preserving. We'll be getting a chest freezer and we'll be freezing a lot of stuff. That will help reduce the cost of going to the grocery store."

Mike is quick to point out that he's not an "off the grid" doomsday prepper. He's just concerned with saving money and helping the environment as much as he can. "The whole idea behind this concept is we super insulate the house. We use materials that we know are less toxic for the enrivonment and for us. And we use local products so we're not bringing in products from other countries," he said. "One of the things I have a problem with about being off-grid is the batteries, because they're still using batteries that are still kind of a lead/acid technology. Even the lithium-ion batteries are still a recyclable product that needs to be dealt with.

"So for me, the grid's already in place," he continued. "If we can put solar on here and then work with the electric companies by selling our energy back, using theirs when we're not producing -- to me, that becomes a good pair." 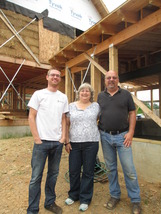 The exterior of the home will be coated in a tinted lime plaster that will look like stucco, Pellman said. "It's basically identical to the stuff that would have been used in the construction of ancient Rome. It's what was used in the construction of the aqueducts, the Coliseum, all that stuff. And they're still around." That means the home is going to be around for just about forever.

The cost of building the home, Mike said, is about the same as the cost of using more conventional materials. The savings down the line, though, are the payoff.

"Call me crazy, but I'm looking forward to the first $25 electric bill," he said, smiling.

The home is slated to be finished by Christmas, and the DeGeisos are prepared to do much of the interior work - painting and flooring and details - by themselves.

"There's a pride of ownership," Mike said.  "We've skinned our elbows. It's been fun being out here, working with the crew. The idea is to build the house that we want, set the environment that we want, but still fit into the community."

To follow the progress of the DeGeisos as the home nears completion, visit their blog at www.twoviewacres.com.