The Mystery of Snowwhite’s Family Reunion The body of Neve Bianca Scontroso was found near the Genesis building.

“A murder has occurred right here in front of the Genesis building!” exclaimed Det. Joe Giallo. And with those words, between 300 and 350 amateur sleuths were instantly on the case, trying to track down clues as to who delivered a severe blow to Neve Bianca Scontroso’s head. Her lifeless body was sprawled on the pavement. 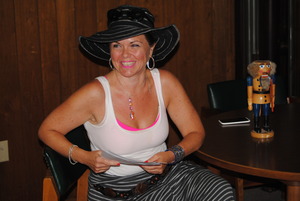 The victim belonged to the distinguished Snowwhite family and was hosting a reunion of the Philadelphia-area relatives at her farm just outside of Kennett Square. With dozens of relatives in town, there was no shortage of suspects. Among the attendees of this year’s reunion were members of the Nuhainen, Verlegen, Toker, Felice, Scontroso, Sonolento, and Doutor families. If you don’t have a Google translator app at the ready, those names approximately translate to Sneezy, Bashful, Dopey, Happy, Grumpy, Sleepy, and Doc. Many of the family members were in Kennett Square to enjoy the First Friday Art Stroll at the time of the crime.

The sleuths working the case started interviewing family members and a picture of the victim began to develop. There were numerous rifts in the family—squabbles over money, jealousy, betrayal, and lots of hurt feelings.

“I think a lot of people had motives because of the book,” said Francesca Felice, a distant 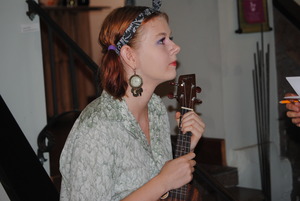 cousin of the victim. She was just one of the people who said that there were concerns about a tell-all book about the family that Neve had written.

When one sleuth pointed out that it was curious that Francesca was carrying around a damaged “Nutcracker” doll, she bristled at the suggestion that she might be the murderer.

Investigators were troubled that Francesca’s son, Frederico, who was supposed to be with her at the Bayard Taylor Memorial Library, wasn’t available to answer questions.

“He has autism,” Francesca said, “and he gets nervous around crowds.”

Francesca told investigators that she and her son were at Michoacana’s eating ice cream at the time of the murder, and her alibi was supported by several witnesses.

Sleuths were very suspicious of Teresa Toker, who admitted that she was “kinda grumpy” about the victim’s plan to publish a book about the family. But she seemed innocent, and the ukulele that she was holding hardly seemed like a good weapon.

A more suspicious character was being questioned by investigators at the Longwood Art Gallery. Sofia Scontroso readily admitted that she was jealous of her sister.

“I think she was my dad’s favorite,” Sofia said. “Someone is always the favorite.”

Sofia said that she was angry that her father had left the family farm to Neve in his will, and that was certainly one of the strongest motives to kill the victim. 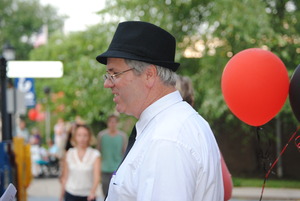 Galen Toker, who was answering questions at Green Eyed Lady, was adamant about her innocence. When an investigator asked her about the bag of potatoes that she held in her hands, she said that she and Talvi Nuhainen had planned to launch them from a potato cannon at the farm. She cast suspicion on Silvia Sonolento and Diedre Doutor, who were apparently upset that Neve had stolen some of their research on the Snowwhite family’s anti-aging gene.

Peter Verlegen had a reason to be angry with the victim—her father had cost Peter a considerable amount of money in a business deal gone bad, but he convincingly maintained his innocence.

“There’s nobody I dislike,” he told investigators. “Family is family.”

Hans Verlegen, however, was more skeptical of his family members. He pointed an accusing finger at Simone Sonolento, who seemed particularly angry with the victim.

A few of the suspects didn’t even try to hide their bad feelings for Neve Scontroso. Desdemona Doutor bluntly said, “She got what she deserved” and decried the fact that the victim had stolen the research of others. Still, Desdemona maintained her innocence.

After two hours of sleuthing, and with darkness descending on the town, all the suspects were 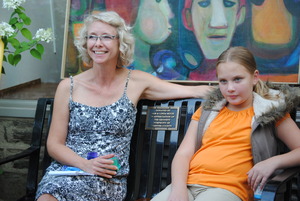 gathered back at the scene of the crime where Det. Giallo started eliminating suspects based on those who had no motives. He also crossed off anyone who had an alibi that could be corroborated. In the end, the detective revealed Simone Sonolento as the murderer.

Several Kennett Amateur Theatrical Society (KATS) performers talked about how much they enjoy the murder mystery art stroll because it allows for so much interaction with the audience.

“People always seem to have a lot of fun,” said Lorraine Desjardiens, who portrayed Desdemona Doutor.

“It’s away to get everyone together when a show isn’t happening,” said Charlie Bloomfield. “It’s also a way to publicize KATS.”

The murder mystery, which was written by Chris Ramsey, was well received by attendees.

John Wilkens, a resident of Kennett Township, said that when he gets a new calendar each 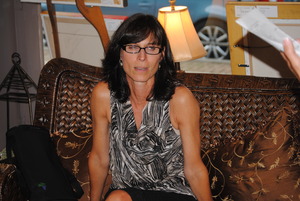 year, one of the things he does is mark the date of this murder mystery event.

“I always think this is very good,” Wilkens said of the murder mystery. “Everybody seems to enjoy it—the actors and the people who come here to see them.”

Wilkens has attended the last several murder mysteries and has a method for identifying the guilty person.

“We look at all the alibis and who can corroborate them,” he said. “The stories are all very interesting, but the meat of it is always in the alibis."