The Chester County squad, comprised of players from KAU, Caln, Coatesville, and Avon Grove, left on Monday for Easely, South Carolina to represent the U.S. Eastern region and compete against 10 other teams. 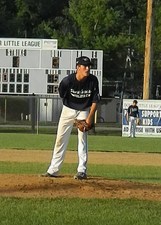 The 2014 District 28 18U All-Stars earned a spot in the Big League World Series by defeating District 1 Champion Delaware to win the Eastern Regional Championship, 5-0. The Chester County squad –comprised of players from KAU, Caln, Coatesville, and Avon Grove—left on Monday for Easely, South Carolina to represent the U.S. Eastern region and compete against 10 other teams from the United States and around the world. For 17- and 18-year-olds, participating in the Big League World Series is equivalent to a 12-year-old playing in the Little League World Series in Williamsport. Big League is the highest division of play chartered by Little League International.

In the championship game against Delaware, Unionville High School Senior Ryan Barrett sandwiched two hits in the first inning with two in the bottom of the seventh for the win. He also earned for himself and some of his teammates a trip to yet another World Series. A core group of the 18U All-Stars were members of the KAU Little League Kennett Kings’ squad who in 2013 competed in the Senior League World Series, advancing to the championship before losing to Panama, 2-1.

District 28—or the Eastern Regional Champs as they now are known—scored first when Sean Faux of KAU led off the game with a single. He advanced on a base hit by Caln’s Brian Greist and scored the first runs on a wild pitch. Barrett got out a bases-loaded jam in the bottom of the first after giving up two singles to the first two Delaware batters. Cruising right along, six innings later, he gave up the only other two.

District 28 added another run in the fourth when Dave Villafane of KAU doubled and scored on another Delaware wild pitch. In the fifth, the 28 All-Stars chased Delaware starter from the game. Caln’s Brian Corrigan, KAU’s Philip Matranga, Faux and Griest all singled to plate two runs. District 28 scored its final run in the sixth on a sacrifice fly by Faux. They squandered a bases-loaded opportunity when Delaware ended the inning on a rare triple play from the shortstop to the catcher to the first baseman to the catcher, nailing two District 28 runners at home plate.