A day after the storm, the Kennett Run shines brightly Over 1,500 competitors crossed the finish line at Anson B. Nixon Park.

On Friday, May 16, the streets of Kennett Square were tormented by a ferocious deluge of rain that turned puddles into ponds and trickle streams into small rivers. By the next morning, the rain had given way to a thousand pairs of sneakers running on the same streets, as well as over a dozen parents pushing strollers, a few colorful costumes, a tribute to a dear friend, and the pageantry of the 25th annual Kennett Run. 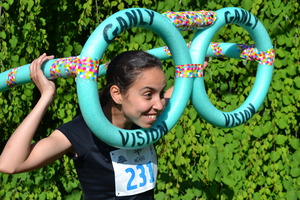 More than 1,500 runners and walkers participated in the fund-raising event, which has in its quarter century contributed $536,784 toward local organizations, schools and families in the community. The day began at 7 a.m., with the first annual Joe Hector PoweRun Lifting competition, named in honor of Hector, a long-time employee of the Kennett Area YMCA. Following opening remarks by race director Nadiene Ringler-Friedrich and a performance of “The Star Spangled Banner” by former Kennett Square mayor Leon Spencer and his wife Kathryn, the Kennett Run kicked off with a 10K run, three different 5K races and a one-mile FundRun for children and their families. Following the race's conclusion at Anson B. Nixon Park, competitors, their friends and families and the entire community joined together for food, beverages and the shared commiseration of various aches and pains.

Although several awards were handed out for the winners in several race categories, no awards 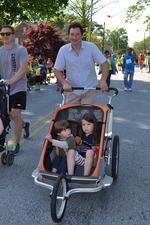 were distributed to the real winners of the race: the more than 100 volunteers and the Kennett Borough's road crew, who worked to get the course and park in shape in record time in advance of – and in the aftermath of – the Friday morning rainstorm. 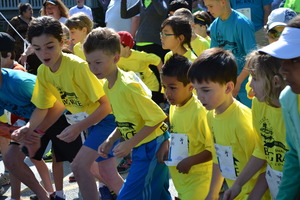 In previous years, the course and park were set up on the Friday before the race, but in order to compensate for the predicted rainstorm, the course went up last Wednesday, to the delight of Matt Genereux, president of Kennett Run Charities, Inc.

“We usually set up the race at 12 noon on Friday 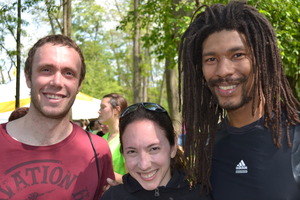 and finish at 6 p.m. at night,” Genereux said. “We called service clubs and got 100 volunteers from high schools and other civic groups, and had everything done by about 6 p.m. Thursday night.”

Genereux said he woke up at 5 a.m. on Friday and saw that it was already drizzling, but by 8 a.m., the drizzle had turned into a pelting rain.

“But by two p.m., the sun started shining, so we all went to the park and cleaned up from the after effects of the heavy rain,” he said. “The borough's full-time road crew assisted in getting the trails ready. By 4 a.m. on Saturday, the volunteers did the final sweep of the race trails.” 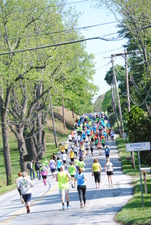 With the course now cleared of debris, it became a stage for the many stories of its competitors. A few runners paid tribute to Hector by carrying large cardboard cut-out facsimiles of Hector's profile as they ran. For 81-year-old John Schultz of Wilmington, the Kennett Run was merely one of 100 races he will participate in this year.

“I've been running since I was 59 years old,” said Schultz, who finished 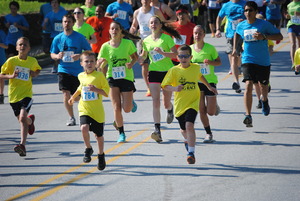 in first place in the Over-75 age bracket and received an appreciative ovation when his name was announced at the award ceremony. “I began running just to see if I cold do it. I love finishing, but the running part is good, too.” 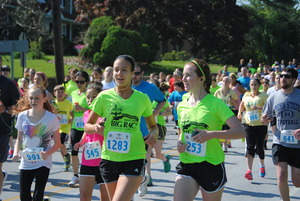 For Melinda Kuritzky of Washington, D.C.,  the Kennett Run was like coming back to see an old friend. Kuritzky, 29, ran in the very first Kennett Run when she was four years old an participated in the first 15 years of the race, and for good reason. Her uncle, Michael Perna, served as the first president of the Kennett Run and is generally considered by many to be the unofficial “Father” of the event.

“Twenty-five years ago, I remember that we ran down State Street,” she recalled. “Compared to the  first time, the Kennett Run has grown a lot. My family has continued to run every year, and we have all been very involved in its organization.”

For a complete listing of results, times and finishes for all race categories, go to www.novatimingsystems.com.