A monument marks the graves of soldiers killed in the Revolutionary War at the Birmingham Meetinghouse.

Religious persecution has caused millions of people around the world to seek a better, friendlier place to live. 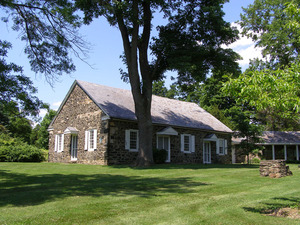 In the 17th century, there were many dissenters in Great Britain who disagreed with the policies of the Church of England. After having a vision in which he claimed to have experienced the presence of Jesus Christ, George Fox began preaching a direct involvement of each person with the deity, without the need for ordained clergy. His actions were viewed as highly controversial and in 1650, Fox was brought before magistrates on the charge of blasphemy.

In his autobiography, Fox tells how he directed the magistrates to “tremble at the world of the Lord…” The term “Quaker” was later used to describe him and his followers, who were also referred to as the Religious Society of Friends.

William Penn was an early practitioner of this denomination. In 1681, the King of England 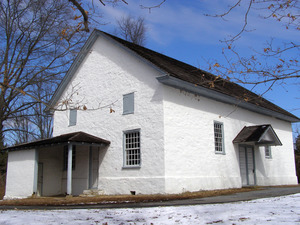 granted him title to 45,000 acres in North America to satisfy a debt owed to Penn’s father. Penn jubilantly drew up a frame of government stressing freedom of religion in what would become the colony of Pennsylvania.

Chester County was one of its three original jurisdictions, and Quakers began settling here in large numbers. Although they espoused peaceful coexistence, not all of their experiences were pleasant. Disputes occurred as many Quakers formed their own sets of beliefs, leading to various sects, such as the Wilburites, Gurneyites and Beaconites.

The first Quaker meetings in Birmingham Township were held around 1690. A meetinghouse for the Birmingham Friends was constructed using red cedar logs, later replaced with stone. The structure flanked a cemetery surrounded by a long wall, which gave cover to Continental soldiers during the Battle of the Brandywine. Dozens of British and American troops were killed at this site, and a large stone monument marks their final resting place. 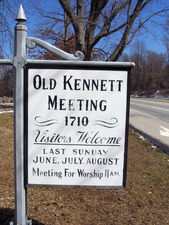 A unique octagonal schoolhouse was built nearby, and the site is now used as The Peace Center at Birmingham. As you walk along the edge of the burial ground, you can sense the presence of those patriots who gave their lives for the cause of independence. A bronze plaque pays homage in a simple statement: “This grave is a place to contemplate a world without war.”

Another location of Quaker worship was the Old Kennett Meetinghouse, built by Ezekiel Harlan in 1710 on land deeded from William Penn. Early regional meetings included settlers of nearby Hockessin, New Castle and Newark, Del., but by 1760, the members agreed to focus their congregation at Kennett.

Differences in philosophy caused a split into conservative and liberal sects, with a progressive group opposed to slavery splitting off to form the Progressive Friends. They built the Longwood Meetinghouse, which hosted such prominent anti-slavery advocates as Harriet Tubman, William Lloyd Garrison and Sojourner Truth. Their building is now home to the Chester County Visitors Bureau.

Over the decades, Quakers built several structures in the region. Bradford Friends 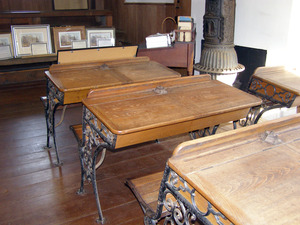 Meetinghouse in Marshallton was constructed due to the devotion of Abraham Marshall (father of noted botanist Humphry Marshall), with its one story enclosing four rooms, as compared to the customary two rooms used by most groups.

Nearby, the Marlborough Friends Meeting had its origins in the settling of a dispute for water rights between two farmers, Richard Barnard and Isaac Baily, who agreed to donate land upon which to build a place for religious worship.

The Marlborough Meetinghouse is an interesting example of Quaker principles, with its interior divider separating men from women for the sake of propriety. A raised platform with facing benches along the back wall is where the “elders” sat, addressing the meetings. 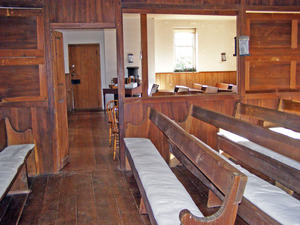 As education was important to the Friends, the women’s side was converted into a schoolroom in 1880. Students paid 50 cents a week for their learning. You can still see their old wooden double desks with inkwells and books of the period. Noted artist Barclay Rubincam was a friend of Marlborough Friends member Charles Barnard, and created a lovely painting of their sturdy red brick building, a horse and carriage standing nearby.

Despite diminished numbers today, Quakers continue to quietly practice their beliefs around the region. Due to their importance in showcasing our early heritage, all of these meetinghouses have been added to the National Register of Historic Places.

Seeing the staid, yet elegant structures, we’re reminded of a simpler time, when people not 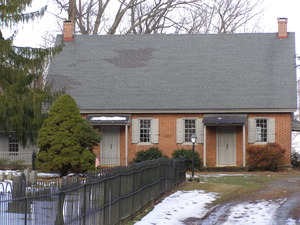 only knew their neighbors, but they often walked miles to help them in times of need. These houses of worship can be found throughout the county, their quiet appeal a silent offer to all who pass by: “Welcome. Come in … and pray.”

Gene Pisasale is an author and lecturer based in Kennett Square. His six books focus on regional history. His latest work is “The Forgotten Star,” a novel covering true-life mysteries surrounding the Star-Spangled Banner. For more information, visit www.GenePisasale.com, or e-mail him at [email protected]