Like a lot of people in southern Chester County, I associate Camp Saginaw with warm summer days and sunshine. I’ve had the opportunity to write about events at the camp many times over the years and these stories usually involve interviewing happy children having a great time at the camp. I once met Flyers legend Bernie Parent when he was signing autographs for children at the camp. I also met Darryl Dawkins there, too, when he was running a basketball clinic. And each August, Camp Dreamcatcher hosts its weeklong gathering on the property, which is always a highlight of the year. 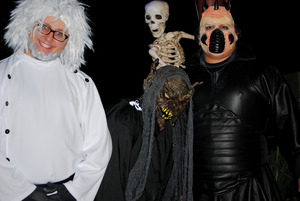 So when Camp Saginaw announced that it was transforming itself into southern Chester County’s own high-tech, high-thrill haunted attraction for Halloween, I couldn’t wait for the debut of Camp Spookynaw.

On Oct. 3, with the last moments of daylight fading in the autumn sky, I went to explore this enchanted land of wizards and witches.

As soon I parked the car, I started to notice the differences between sunny Camp Saginaw and Camp Spookynaw. With darkness descending and a cool wind stirring the tall trees, it suddenly felt like Halloween. As I started to walk along the winding path that leads to the main part of the camp, it felt like a ghost or a ghoul could come floating out around the next turn. And what were those strange sounds in the distance? Were those screams? I walked on and in a few minutes I was at the front entrance to Halloween haunt. A witchy woman was stationed at the entrance. I asked her how she ended up at Camp Saginaw at this time of the year. 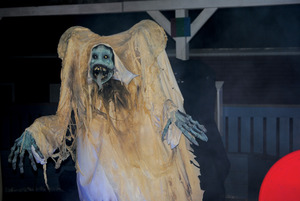 It’s right up my alley, too, so I journey on, waiting for the next discovery.  I knew that Camp Spookynaw has a total of about 20 different scenes, and each one contributes a piece to the story about a search for the dragon.

Soon, I meet a spooky, hunched-over man named Mike whose friendliness belies his appearance, which on this evening includes facial sores and creepy garb suitable for a vampire’s assistant. Mike lives about a half a mile away from Camp Spookynaw and volunteered to help in any way he was needed so he’s dressed up as a “grave pusher,” and he’s going to spend the evening lurking in the shadows. Mike is clearly having fun with his character.

“They didn’t have these when I was a kid,” he said of Halloween haunts that are so popular today.

One thing that’s nice about Camp Spookynaw is that, while there is plenty of eeriness and spookiness and a few potentially scary situations, it is family-friendly. The owners have opted for enchantment and mystery over violence and gore. While there might be a shriek or two along the way, guests don’t need to fear chainsaw-wielding maniacs and there won’t be any severed limbs.

As I continue my own search for the mystical dragon that is said to hold sway over Camp Spookynaw, I come upon a witch who is stirring a bubbling cauldron. I expect her to be chanting, “Double, double toil and trouble/fire burn, and caldron bubble” but instead she happily engages this visitor in conversation. She professes her fondness for the Wicked Witch of the West. She encourages me to go into the building nearby. Ordinarily this is the camp’s dining hall. Inside this unnaturally dark building, I meet Taylor Shellenberger, Kyle Denton, and Taylor Kveragas. Despite their painted faces, they seem friendly enough. In fact, that courtesy extends so far that they are warning people about the spider’s lair that awaits those who go through the building. Giant spiders haunt my nightmares, but I continue on. Sure enough, an angry arachnid has woven a massive web to trap unsuspecting victims. I’m not unsuspecting. I sprint out the door before the spider realizes I’m in its lair.

After that experience, the sounds of pumpkins singing and the sights a skeleton-band playing a tune are an enjoyable change of pace. Soon, I’m face to face with Dr. Roger Claymont who was hard at work on some experiment in his laboratory before I interrupted. He looks like the great great grandson of Dr. Victor Frankenstein. I look around and through the haze of a dense fog I see what appears to be a human skull.

Dr. Claymont is perceptive, or maybe the horror that I’m feeling is written on my face, but he attempts to make me feel better, I think, by explaining that, “I’ve had many experiments that have gone wrong.”

That doesn’t make me feel any better. Not wanting to be a part of one of his biological experiments, I leave his laboratory at approximately the same speed I left the spider’s lair.

As I continue on the path, I start to get a creepy vibe that I’m being watched and sure enough two scary beings are lurking nearby. I hurry on and I come upon a campsite where a man has been bitten by a werewolf and is completing the shape-shift into a lycanthrope.

I quicken my pace and move on, just as happy to put some distance between me and the werewolf as I am to get closer to this dragon.

A few minutes later, I see that a group of people up ahead have discovered the elusive dragon. Someone comes out of the shadows and warns the group not to touch the dragon before disappearing back into the shadows again. There won’t be any need to share that warning with me. I marvel at the majesty of the dragon from a safe distance.

A few minutes later, as I drive down the narrow road to leave Camp Spookynaw, screams and shrieks still echoing in the cool night air, I know that I will never think of Camp Saginaw and its sun-filled summer days without also thinking about the darker, more enchanting Camp Spookynaw. The Halloween haunt makes good on its promise of frightening—but family-friendly fun.

Camp Spookynaw is open from 7 p.m. to 11 p.m. each Friday, Saturday, and Sunday in October. During the week of Halloween, the camp is also open on Thursday, Oct. 30. There are three different ticket packages. General admission tickets to enjoy the haunt are $20. VIP admission tickets, which are $30 each, offer guests the chance to enjoy the haunt without waiting in any lines. A VIP package is also available, which includes the VIP admission, VIP parking, and a t-shirt. There are discounts for group sales and birthday party packages are also available.

Camp Spookynaw is located at 740 Saginaw Road in Oxford. For more information or to purchase tickets, visit www.campspookynaw.com or call 610-553-6000.