Some of the food that was donated to the Neighborhood Services Center.

Hunger will be abated for hundreds of needy families thanks to the efforts of approximately 80 members of the Chester County chapter of ABATE. 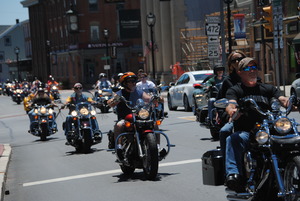 On Saturday, July 5, the group departed the parking lot of the Giant grocery store in Penn Township promptly at 1 p.m. and made the short trek to the Neighborhood Services Center in Oxford, hauling with them the equivalent of more than 55 shopping carts of food.

This was the 25th year for the Dwight Wallace Memorial Motorcycle Food Run, which keeps getting bigger each year.

“This is our best year yet,” explained Jesse 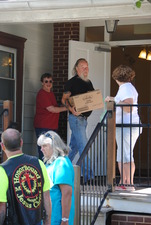 Reed, the chairman of the food run for the last nine years. He said that in addition to the dozens of boxes of canned vegetables, rice, cereals, and other essential items, the organization also collected more than $1,900 that would be contributed to help neighbors in need.

For the ABATE members, this is an opportunity to give back to the local community.

“The food contributions we make each year help feed many of the people in the southern end of Chester County who are unable to provide for their families,” said Reed. “Every little bit we collect helps people who need help feeding their families.” 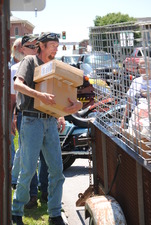 According to McConnell, the Neighborhood Services Center has come to depend on this food run for supplies at a very critical time of the year. She noted that the summer months are usually slow ones when it comes to donations, so the extra non-perishable foods and disposable diapers help keep the cupboards full.

“This is a very important food drive for us,” said McConnell. “It keeps us going through the summer months.” 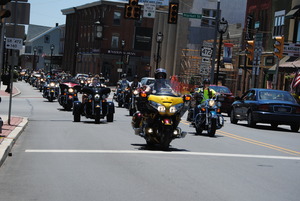 food, so they've been able to boost the collection amounts. Volunteers sought donations for the food run at several local grocery stores in the weeks leading up the event.

Reed explained that the food run is dedicated to the memory of all fallen members of the chapter and is named in honor of Dwight Wallace, who was killed on June 30, 1988 when a car crossed over the yellow line and struck him. The following year, members of the Chester County chapter of ABATE, which was only a year old at the time, started the food run in his memory.

Arta Mae Thomas, Wallace’s mother, is a volunteer for the event, and she helps during the process of collecting food.

This chapter of ABATE is like one big, extended family.

Jim Johnson, a member of ABATE, said that he and his wife, Sue, like to participate in this food drive because they get to help others and because the food run is organized in memory of those members of ABATE who have passed away. Johnson said that he and wife used to work with Arta Mae Thomas.

“She's a good person. She's like a surrogate mom to a lot of these people,” he said, gesturing to the 75 or so other ABATE members.