Help for the homeless Officials from the Kennett Area Community Service and the Neighborhood Services Center in Oxford are working with local church leaders to explore the possibility of starting a program that will help the homeless in southern Chester County.

The proposed program, which would be aligned with a New Jersey-based non-profit called Family Promise that has 184 affiliates in 41 different states, would focus on assisting families that are in crisis. Officials said that in 2013, there were 284 children who experienced homelessness in the four school districts in southern Chester County. Many of these families unexpectedly fell into a financial crisis as they were caught between a vice of high housing costs and low wages. 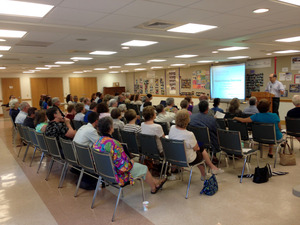 provide overnight accommodations, meals, and other assistance to stabilize these families took place at a public meeting at the Episcopal Church of the Advent in Kennett Square on June 25.

Claas Ehlers, the director of affiliate services for Family Promise, said that Chester County reminds him of some other communities where programs have been started in that it is an affluent area that is also under-resourced for families in need. The demands being placed on shelters and other resources available to families are increasing in Chester County. Last year, county officials worked to coordinate all the services that are available. 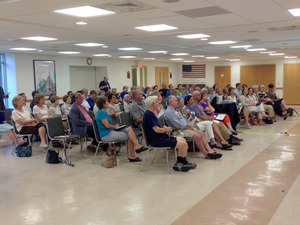 “What they found,” said Kate Uhler, the case manager for Kennett Area Community Service, “is that the needs far outweighed the resources. This is an affluent area, but it’s difficult to find affordable housing.”

The Kennett Area Community Service and the Oxford Neighborhood Services Center, both of which provides food and other basic needs to local residents, are collaborating more to maximize the limited resources that are available in the southern part of the county.

“We knew that we couldn’t go through another winter without doing something,” Uhler said. 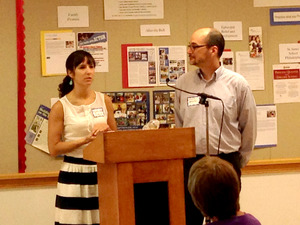 audience about the need for more assistance for homeless families.

On Jan. 3, she recalled, the area was blanketed with a foot of snow. Impoverished families were desperate for help with energy bills and food. Uhler drove to work from her home in Downingtown and not long after she got to work she received a telephone call about five families with children that were living in hazardous conditions in condemned units that are too small to be considered apartments. Electrical wires were uncovered. People were sleeping in rooms that were approximately the size of closets. There was no place for these families to turn, and the weather conditions made the situation dangerous.

“The shelters were all full,” Uhler said. 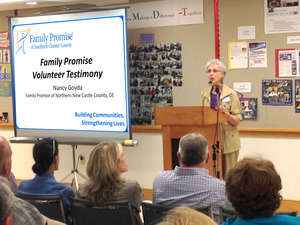 In another illustration of the unfortunate circumstances that some families face, Uhler explained that a mother, in the aftermath of a divorce, was forced to spend nights in a car with her three children. Again, with the shelters full, there was no place for the family to turn.

Uhler added that each family has a different story about why it fell on hard times. Sometimes, the fall can be attributed to a job loss or a health emergency, but other times the downward spiral can come with astonishing speed.

“The reason that they became homeless is different for each family,” Uhler explained.

Although it’s difficult to track how many Americans are homeless at any given time, there are 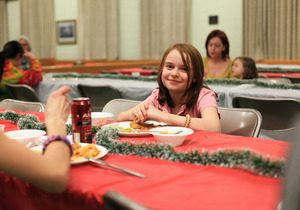 The picture in southern Chester County may not be as grim as it is in some urban areas, but there are pockets of forgotten poor in the area who are continually teetering on the brink of disaster.

Officials at the Kennett Area Community Service and Neighborhood Services Center help people with the hardships every day. 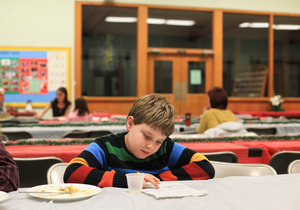 Melanie Weiler, the executive director of Kennett Area Community Service, said that in the last year the  Kennett Consolidated School District reported 63 children who experienced homelessness. It’s easy to understand why officials there would support an initiative that would provide much-needed help for a segment of the population that needs it the most.

“Based upon the hard data collected by the various support agencies in Chester County unexpected family homelessness that impacts parents and children is definitely an ongoing occurrence around the county and in our southern Chester County area,” said Dave Haradon, a member of the Family Promise core team. This core team is organizing the meetings and other preliminary work. Once the program is formally established, the name will be Family Promise of Southern Chester County.

Ehlers said that organizations like the Kennett Area Community Service and Oxford Neighborhood Services Center are invaluable to success for the Family Promise program.  But the engine that drives the program are the 10 to 13 congregations that serve as host sites for one week at a time on a rotating basis throughout the year.

“This is the heart of the program,” Ehlers said. “If you look at any social changes in this country, it has always been led by the faith community. {This is} an opportunity to put your faith in action.”

Although each Family Promise affiliate varies slightly, there are some similarities in how the program operates in each community.

A church congregation serves as the host four or five times a year, with church members doing everything from making meals to setting up beds to playing Uno with the families. The families move in to a church building on Sunday where members have prepared meals and set up the beds and play areas for children. Sunday School classes can even help set up. There’s a family-style dinner at the church on the first night of the stay, helping the families feel at home. Two volunteers stay overnight, making sure that everyone is cared for and comfortable.

On Monday, the van takes families to a designated day center—each community affiliated with Family Promise has one—where the families meet with a case manager and begin to develop a plan to get work and sustainable housing. The day center is the wheel with each congregation serving as a spoke. The day center remains constant during a family’s stay in the Family Promise program, and serves as a home base and a permanent address as they look for housing and jobs.

Each church will need to fill about 50 volunteer slots throughout the week, and invariably some volunteers will occupy more than one slot. It’s not just about providing basic needs like shelter and some food, but also about showing the families in need that someone cares. In fact, it’s the kindness of these volunteers that often makes the most difference to the parents and children who find mercy in these houses of God. The open doors are important, but so too are the open hearts.

“It’s the warmth of your people, not the fanciness of the space,” said Nancy Goyda of the Grace Lutheran Church in Hockessin, Del., which is a participant in the Family Promise of New Castle County. “We have people who get involved with this ministry who don’t get involved in anything else. Once you do this, you’re hooked.”

“What we need already exists in the community,” said Ehlers. “It’s just a matter of gathering the resources.”

Haradon said that utilizing the volunteering might of local church members is a good way to address a tremendous need.

“Responsibly implementing solutions for this real issue with volunteer resources from the faith-based community is the perfect way to help those in need,” Haradon said. “Such an approach also precludes the need for typical tax-based burdens of governmental resources and solutions.”

The program also becomes a catalyst for other community initiatives, such as job counseling, parenting workshops, or transitional housing.

Haradon said that there are numerous benefits to aligning the local effort with Family Promise.

“Affiliating ourselves with the Family Promise organization brings a wealth of talent and experience to guide our efforts to achieve maximum sustainable results in a minimum amount of time,” said Haradon. “It’s sort of along the philosophy of, 'Do for others what you would want others to do for you' if you were suddenly in an unexpected homeless situation yourself.”

Ehlers, whose church started helping the homeless through Family Promise in 1987, emphasized that many of the families who find themselves in the plight are not who you’d expect to be in that situation.

He shared stories about one family who needed assistance because the duplex they lived in burned down and they did not have the money for a security deposit and first month’s rent at a new apartment. Another woman who was suffering from Fibromyalgia, a common syndrome in which a person has long-term, body-wide pain and tenderness in the joints, muscles, tendons, and other soft tissues, had to move out of the home that she was staying at because of a toxic environment. Another woman had seven children to care for after her husband left the family with no money.

In a video about Family Promise that Ehlers showed, a U.S. veteran identified as Jason M. talked about how he couldn’t find a job after spending 14 years in the Army and how the family quickly descended into financial despair.

“The hardest part,” the veteran said in the video, “is not knowing if you can take care of your family.”

There are tens of thousands of other dads and moms who find themselves in similar circumstances.

In 2012, the Family Promise program served 56,143 individuals. Sixty-two percent of the guests had children with them, and forty-four percent of the children were under the age of 5. The average length of stay for a family was 64 days.

Ehlers said that the director of the Family Promise affiliate can decide to allow a family to stay for as long as necessary if that family is making the effort to do what is necessary to achieve long-term, sustainable housing. The goal of the program is not simply to provide a temporary shelter, but rather hope for a better, brighter future. Seventy-five percent of the families who used Family Promise's services managed to obtain long-term housing on their own after entering the program.

“What you really want to do is get the family to the point where they have sustained housing,” Ehlers explained.

Uhler said that if the program is started here in southern Chester County, people may be surprised at how much of a need there is. The nearby New Castle County program has a waiting list at times because there is a limit of about five families or 14 people in the program at any one time.

It can take as much as ten or twelve months to do all the groundwork for the program before families are being helped. Organizers have planned the next meeting for July 22 at 7 p.m. at the Episcopal Church of the Advent.

11:00am · Phillips Seafood Restaurant in The Pier Shops at Caesars
1