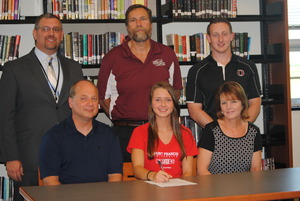 Sniechoski ranks among the school's all-time competitors in the pole vault. She placed in the top ten in states as a junior in 2013. As a sophomore, she won the Ches-Mont League Championships in the event. She turned in jumps of 11 feet twice in her junior season and two more times in her senior season. At the signing, Sniechoski was joined by her parents, Robert and Corinne, as well as Oxford Area High School principal Christopher Dormer, track coach Spencer Beimfohr, and athletic director Michael Price.