Fifty-six all-star cheerleaders ranging in age from 8 to 15 participated in a national cheerleading competition in Orlando, Fla., in early May. 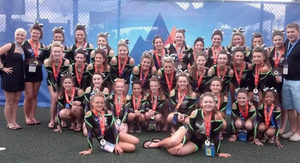 The Starlets, a junior level 3 team, and the Primadonnas, a youth level 2 team, represented KX Athletics of West Grove at  Varsity All Stars' “The Summit.”  The event was a live competition held at ESPN’s Wide World of Sports in Walt Disney World.

All-star cheerleading is a sport that combines tumbling, stunting and dance.  At competitions, groups perform a two-and-a-half minute routine to music that is judged on difficulty, precision, choreography and showmanship.

Only 475 teams across the nation received bids (invitations) to attend The Summit.  Bids were awarded at 40 events nationwide from December through April.

KX Athletics attended  two of the qualifying events this season. The Starlets, coached by Chris Ivy and Abby Kline, were awarded the bid at the American Masters Championship event in Baltimore in February. The Primadonnas, coached by Justine Laskowski and Cori D’Amico, earned the bid at the Battle at the Beach in Myrtle Beach, S.C., in March.