Harner, who threw a no-hitter earlier this season, pitched the first perfect game of her career on April 10. She fanned 18 hitters.

Kennett senior Brooke Harner threw the first perfect game of her career on April 10, striking out 18 hitters as her team defeated Sun Valley, 6-0. 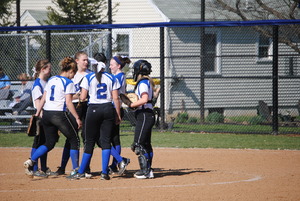 Harner deployed the best weapons in her arsenal, skillfully mixing forceful rise balls with well-placed curve balls to keep the opposing hitters off-balance. She fanned the first ten hitters she faced. Sun Valley’s Amber Michael snapped that streak when she managed to put the bat on the ball—but Harner handled the grounder back to the mound and the perfect game continued. The next hitter, Brooke Duplicki, roped a liner into right field, but Kennett right fielder Jamie Wessels fielded the ball quickly and threw the runner out before she reached first base.

As the game moved to the later innings, Sun Valley hitters did everything they could to reach base, attempting more bunts and trying to get around on rise balls. But Harner’s control sharpened as the game went on and the Kennett hurler continued to baffle Sun Valley.

On a day when the pitcher was unhittable, Kennett’s offense produced all the runs the team 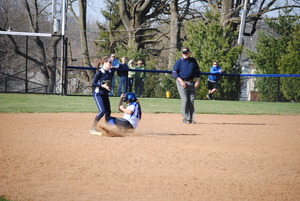 would need in the first inning when two runners scored. Kennett tacked on another run in the second and three more in the sixth, so when Harner took the mound in the top of the seventh inning the result of the game wasn’t in doubt. Harner could focus on making history.

Sun Valley sent the first three hitters in its lineup to the plate. Harner got ahead of leadoff hitter Ashley Grindle. With one strike on her, Grindle attempted to bunt, but it was to no avail. On the next pitch, Grindle struck out looking.

Next, Michael stepped in to the batter’s box. As one of only two Sun Valley hitters to put the ball in play, she represented a real threat to the perfect game. Michael fouled off the first pitch and swung and missed on the second, falling behind in the count. Harner took a careful approach, and the count went to 2-2 before the Kennett hurler struck Michael out. 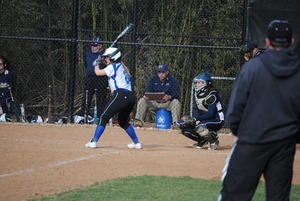 Duplicki stepped up to the plate looking to end the perfect game with one swing of the bat. Harner quickly got ahead with a strike. But then Duplicki delivered Sun Valley’s hardest-hit ball of the game, a sharp liner that seemed destined for right field. Kennett second baseman Bailey Reigel managed to snare the line drive and the sensational catch ended the game.

Teammates gathered to celebrate the win and congratulate Harner for her historic outing.

Afterward, Harner said that she thought the line shot off Duplicki’s bat was going to end the perfect game bid.

“I thought it was a hit and my heart just kind of sunk,” she explained, adding that she felt a sense of relief when she realized that Reigel had caught the ball.

Harner ranks among the elite pitchers in the Ches-Mont League, so she’s pitched some gems in her career—in addition to the no-hitter, she’s pitched into the seventh inning without giving up hits or walks. But until this day, the perfect game had eluded her.

When asked about the perfect game, the first thing Harner did was give credit to the defense, 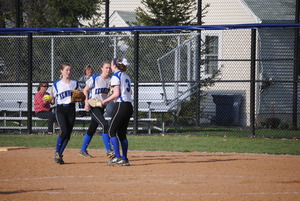 mentioning Wessels’ heads-up play in the fourth inning and then Reigel’s save-the-day snag of the line drive to end the game.

Harner also pointed to the contributions of catcher Camille Brown for managing the game from behind the plate.

“I give her all the credit,” Harner said.

While Harner can reach 60 miles an hour with her hardest pitches, a big part of her success is finding the right approach to each hitter and then locating her pitches where she wants them.

Reigel joked that the luxury of sending out of the best pitchers in the league helps him relax—a little—as his team plays against the tough Ches-Mont League competition.

Kennett’s record improved to 7-1 in the league with the win, and the team remained atop the American Division standings.

While Harner’s performance has been outstanding thus far this season, Kennett’s offense has been playing its part in the wins. As any elite softball pitcher will attest, plenty of dominating pitching performances can be squandered without offensive support.

Against Sun Valley, Kennett grabbed an early 3-0 lead by playing good, fundamental softball—with hitters moving runners over and runners being smart and aggressive on the basepaths. Wessels drove in a run and Kylee Harvey, a freshman, picked up two RBIs with a double.

Reigel said that his team’s offense has been consistently good.

“We have seven of the nine girls in the order who can hit the ball hard,” he said. “You really can’t pitch around anyone in that lineup. We’re a deep team.”

Reigel said that he’s pleased with the start that his team is off to, but cautioned that there’s a lot of softball left to play.

“We want to play well every single pitch of every single game,” he said. “Right now, we’re not even halfway through the schedule. There’s a lot of season left.”