Valuable lessons behind the wheel Karen Dickens explains the parking brake to a young driver.

Twenty students at Oxford High School got some real-life experiences behind the wheel on Tuesday morning, even if the cars were golf carts and the speeds were very low.

The SmartDrive organization, a non-profit organization founded in Delaware in 2004, came to the school as part of its regular series of classes, bringing students out to the parking lot for some valuable lessons that went well beyond the textbook. 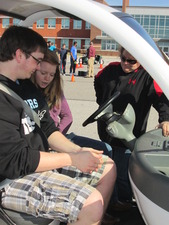 Karen Dickens, the program coordinator, stood next to the Gem Car, a battery-powered miniature vehicle, while two students got inside. She covered the basics that young drivers might not think about – adjust your mirrors, place your heel on the floor so that you can pivot from the gas pedal to the brake without interruption. Put your hands in the proper places on either side of the steering wheel so that, if the air bag goes off, it doesn't drive your hands up into your face and break your nose.

The idea was to drive the Gem Car forward between safety cones, then reverse it back to its starting point, without hitting anything. “Guys, I always tell you that a car is like a girl. If you jerk her around on the first date, she's not going to want to date you a second time,” Dickens told two boys in the car. “Remember – smooth and easy does it.” The young driver, grinning, completed the short course and made room for the next pair of students.

Nearby, students took turns pedaling a tricycle around safety cones while not impaired, then 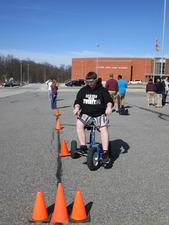 donned goggles with blurry lenses to simulate the altered depth perception and vision that come with being drunk. Laughing, the students did their best to maneuver, but most ran over at least one cone.

And then there was the area where pairs of students had to drive a full-size, gas-powered golf cart through a course while answering questions relayed to them inside the car from a SmartDrive volunteer on a microphone. “What's the name of the vice-president?” “What's 22 divided by 11?” he asked them in rapid sequence while they circled the cones. After they got back to the starting point, they were asked, “What happened when you were answering?”

“That's right. When you start to engage your mind for the thinking, you stop the mind for the driving,” the instructor said with a smile.

Students were timed during the course, and driving while distracted added 15 to 20 seconds to their times.

David Phillips, a media relations specialist for State Farm Insurance, one of the SmartDrive program's sponsors, said that distracted driving is now the main culprit in teen crashes. 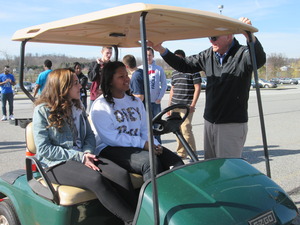 “We're focusing on what's called engaged driving,” Phillips said. “Programs like this are a safe way to develop a skill set so young drivers know what to do in certain situations. There's no magic number of hours that teaches kids to drive. It varies, depending on the child.

Crashes remain the number-one killer of teens,” Phillips added. “In driver's ed classes, it's becoming less about drinking and driving than it is about driving while distracted.”

Teens are comfortable using phones, iPods and other electronics simultaneously in their daily lives, so taking them along in the car seems natural to them. Karen Versuk, of the SmartDrive organization, said, “Distraction is a huge issue right now. We all know that this new generation is attached to their phones, and they're comfortable using them in the car.”

“We cover things like what to do when you come to a funeral procession, or you're behind 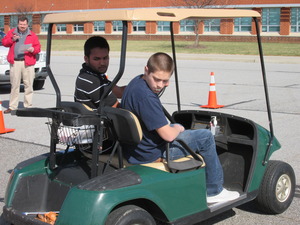 an Amish buggy,” Versuk said. “We talk about how to put in a car seat, what do do in different kinds of weather, and how to behave during a traffic stop. Kids don't know what to do in those situations, so we cover those things.”

Back in the Oxford High School parking lot, every student got a chance to experience all three driving challenges. While they laughed at their mistakes, they also took the lessons seriously.

One young driver told Dickens that he had never been behind the wheel of a car before. Dickens explained how to begin to drive and let the young man try it. When he got to the end of the course, she shouted, “OK, now put on the brake,” and the driver reached for the parking brake lever. 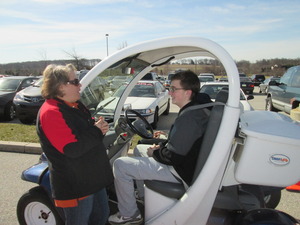 “No! Not the parking brake!” Dickens shouted. “I'll give you points for knowing where it is, but you don't want to pull that. You know how kids do doughnuts in the parking lot? That's how they do it.”

The boy grinned and apologized, but the lesson hit home. He nodded when Dickens advised him, “Remember, it's most important to pay attention behind the wheel.”