A day to thank Unionville graduates Four names were added to the Unionville High School Wall of Honor on March 20, during a day of reunions, reminiscing and gratitude.

The Wall of Honor was started in 2008 to recognize former students at Unionville who had served their communities after graduation. Last week, three photos and plaques were officially added to the wall, which is outside the auditorium at the high school. Ray and Mary McKay were added for their decades of service as educators and volunteers. Samuel Stone Wilson, the late owner of the King Ranch property, was added for his land preservation efforts. Helen Martin was honored for her decades of serving as an educator. 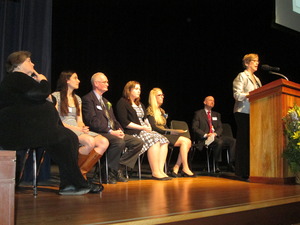 During a school assembly that packed the auditorium, the honorees were introduced at the podium by current Unionville High School seniors. Ryan Clark introduced Ray McKay, from the class of 1960, who told the students that his late wife, Mary, would have appreciated being recognized for her volunteerism. McKay said his family's roots in Unionville go deep. "In 1923, my mother was a student at Unionville," he said. "I was the first one on my father's side of the family to go to college."

McKay met Mary when she was teaching fifth grade at Unionville Elementary School. She was older, and had graduated in the class of 1952. In their years together, they helped plan the Patton Middle School in 1972, helped plan Hillendale Elementary School, helped organize and run the Unionville Community Fair, and the family farm is where Pocopson Elementary School is built, McKay said. The family wanted the land to remain as open as possible, instead of selling it for housing developments.

McKay said he also coached, was a volunteer with the Longwood Fire Company, served as the township roadmaster in the 1970s, and now heads the Lions Club in Kennett Square. His wife, he said, "was known for volunteering for anything, anywhere, anytime."

He urged the students in the audience to "keep volunteering. This community is only as rich and rewarding as you make it."

Unionville senior Thomas Edward introduced Mary Jean Wilson-Stenz, whose father, Samuel Stone Wilson, owned the King Ranch property that once spanned 10,000 acres along Route 82 south of Coatesville. Her father was in the class of 1950.

Her father attended Unionville schools from first to twelfth grade, and her grandfather was the manager of the King Ranch. Raised among horses and cattle, she became well versed in rounding up stray cows that wandered onto Route 82. When her grandfather died, the ranch came to Samuel Wilson, who raised 6,000 cows at a time on the property. Ronald Reagan was a onetime visitor to the ranch, and "asked to meet this guy he'd head about, Sam Wilson," Wilson-Stenz said.

A lifetime conservationist, Wilson's love for the community "was evident in his work as a leader," Wilson-Stenz said. "He led by example. Dad loved Unionville, especially the sports programs. We have a lot of great memories of our years here. Thank you for this honor for my dad."

Jillian Malone introduced Helen E. Martin, from the class of 1963, who was a math and science teacher at the school from 1967 to 2000. She is also an expert on the work and life of Sir Isaac Newton, and in her speech, she managed to span the technological advances that have occurred since Newton's groundbreaking discoveries.

"I live in a farmhouse that was built by my great, great, great grandfather in West Marlborough," Martin said.

She recalled her sense of wonder when, in 1967, she got to access what was the biggest IBM computer in the world  from a desk in New York. "I remember being amazed at doing that," she said, "and it's hard to imagine how technology has spiraled out of control since then."

In 1988, she heard about something called a fax machine that could transmit images through phone lines, "but my students at the time said that was not possible," she said, smiling. Martin went on to get Unionville hooked up to the fledgling internet in the early 1990s.

"I'd like to honor all my teachers, my classmates -- many of whom are here today -- and my family for supporting me all these years," Martin concluded.

School district superintendent John Sanville closed the ceremony, saying, "We are so fortunate to have individuals like these whose contributions are so varied. This just goes to prove that our mission of empowering every student is alive and well in Unionville-Chadds Ford School District."

Past honorees for the Wall of Honor are: