Wyeth poses for a photo with an admirer of her family's art.

In a library where paintings by Andrew, N.C. and Jamie Wyeth are displayed over the bookshelves, Victoria Wyeth shared her love of her family's art in front of an overflow crowd on March 23 during the annual Chadds Ford Art Show. 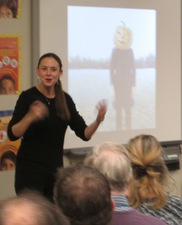 It was the first time that Wyeth had been part of the event at the Chadds Ford Elementary School, but the show itself was started 65 years ago by Betsy and Andrew Wyeth, and has served as a key fundraiser for the school ever since.

Victoria, 35, is the granddaughter of Andrew Wyeth, and her uncle is Jamie Wyeth. She shared close relationships with both artists, giving her a unique insight into the workings of the family. She regularly leads tours of the Wyeth collection at the Brandywine River Museum, but admitted that she wasn't sure how her debut talk at the art show would turn out. 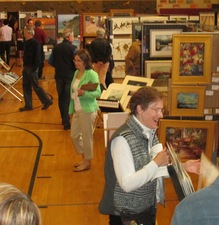 standing room only between the library shelves, it was clear that interest in the Wyeths remains very high. “This is going to be the most biased lecture you'll ever see in your life,” Wyeth told the crowd. “I just loved my grandfather so much. Come on -- how could you not love him?

“My friends all tell me all the time, 'Your life is like a movie,'” Wyeth said, beaming, as she showed images of Jamie's works, including brand-new paintings not seen anywhere else. “When you're a Wyeth, it's like being in a museum, and the exhibit's always changing.”

She shared the inspirations and inside stories about Jamie's portraits of the inhabitants of Monhegan Island, including Kyle, a young man who Wyeth depicted with a handmade sign inviting tourists to the Dead Cat Show under his porch. The reason, Victoria explained, was that he had found several cat corpses and wanted to make a little extra cash.

That off-kilter sense of humor is a running theme in Jamie Wyeth's work and life. His home in Maine is surrounded by a revolving cast of animals – dogs, chickens, sheep and passing seagulls – that become characters in his paintings. 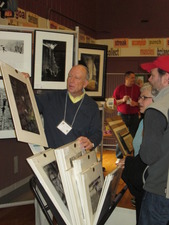 Intimate moments in the family – such as an “I love you” watercolor painting Jamie made for his wife, Phyllis – were shown to round out the sometimes sardonic but always heartfelt work of the artist. Jamie's recent paintings capturing his recurring dream of Andrew standing on Monhegan, looking out at the rolling sea, were put in context as well.

In the second half of her talk, Wyeth talked about Andrew, who died 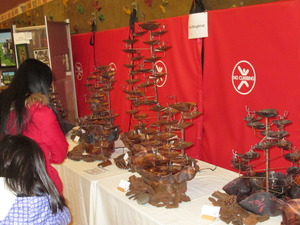 in 2009. “Growing up, I thought that everyone's grandpa painted,” she said, showing a photo of Andrew with his sketch pad, sitting on the hood of his car. In contrast to the public image of Andrew as a dour, serious artist, Victoria said he was usually laughing. “He was so wonderful,” she said. “If you met him, if he was quiet, it was because he was shy.”

Andrew “never used photographs” to capture the people and places he painted, Victoria said emphatically. “And he hated symbolism. He always just said he painted his life.”

Images of Andrew's earliest work, a pirate ship drawn when he was 6, showed precocious talent. By the time he was 14, he produced a stunningly detailed pen-and-ink of knights outside a castle, prompting his father, N.C. Wyeth, to give him formal art lessons. 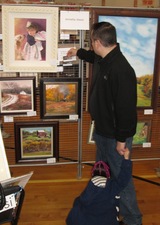 In her talk, spanning Andrew's entire career, Victoria shared her favorite paintings, highlighting details that casual viewers might miss, and relating what the artist told her about each work. His final painting, in October 2008, is a sailboat passing an island in Maine. It's titled “Goodbye My Love.” Wyeth's simple tombstone was also shown. He is buried in Maine.

“I do these lectures to feel like he's still here,” Victoria said. “Like he's going to suddenly walk in here again.”

She dedicated her talk to Chadds Ford artist Paul Scarborough, who 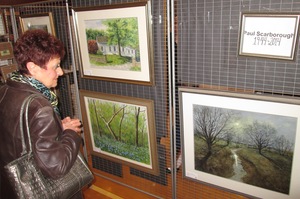 recently passed away. Scarborough's paintings were represented in the main exhibit space for the art show, right inside the gymnasium, where dozens of regional artists were also showing their works. The show opened Friday evening with a reception, and continued all day Saturday. There was a steady crowd of buyers and admirers who came to purchase original art, meet the artists, and to bid on raffle and silent auction items that were displayed in the school's hallways.

After her lecture, Wyeth sat in the library, chatted with a long line of visitors and signed copies of  "Andrew Wyeth: Autobiography" by Thomas Hoving, a book that she urged readers to "go home and read right away, cover to cover." Proceeds from sales of the book benefited the school.