The wisdom of George Washington Carl Closs travels around the country portraying George Washington. On Feb. 21, he did presentations for Oxford students throughout the day and then a presentation for the community at night.

George Washington was the President of the United States from 1789 to 1797 but even now, more than 200 years later, he has plenty of lessons to teach us. 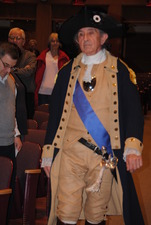 When living biographer Carl Closs portrays our country’s first president in front of an audience, like he did in Oxford on Feb. 21, one of his goals is to share some of those lessons by drawing parallels between the world we live in today and the challenges that Washington faced as a general and, later, as the leader of a young nation that would soon become the greatest democracy the world has ever known.

Closs is a retired educator and business executive who has dedicated his retirement years to helping children and adults discover the real George Washington. Closs spent years of dedicated study exploring the lives of the founding fathers before he fully understood why it was Washington who emerged as the leader among leaders. Closs pointed out that the United States’ other founding fathers were all better educated than Washington, who had no formal schooling, yet he was the one who they repeatedly selected to be the leader.

“They all saw that Washington had true wisdom,” Closs explained. “Part of that wisdom is that he lived a God-centered life. He practiced Christianity. He was humble. He was everything you want as a leader.”

Closs, a Chester County resident, slips into his portrayal of Washington easily. He’s been a living biographer of Washington for 17 years, and the countless hours of research on the nation’s first president allows him to cater the presentation to the audience.

In Oxford, he capped a full day of speaking to students in schools with a presentation at the Penn’s Grove School that was open to the community at night.

“I saw the United States of America as a nation of virtue,” Washington told the audience. “I was aware that everything I did, starting with the swearing-in ceremony, would be closely scrutinized.” 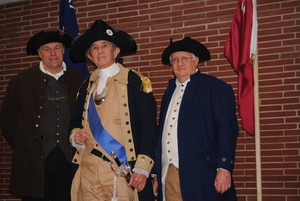 U.S. Constitution, such as how Gouvernour Morris changed the opening line of the preamble of the U.S. Constitution from “We the states…” to “We the people…” which shifted the entire focus from states’ rights to the rights that U.S. citizens should expect.

“That one word changed the document significantly,” he explained.

Closs incorporated actual writings from Washington’s contemporaries—including prominent figures in U.S. history like John Adams, Abigail Adams, and Thomas Jefferson—to enhance the presentation and illuminate Washington's character and the character of people close to him. Closs even talked about Martha Washington, the president’s beloved wife.

“Mrs. Washington was an optimist regardless of the circumstances,” he said, explaining that she was important to the American Revolution. Martha was described as being busy as a bee, but steady as a clock.

Closs talked about the importance of understanding the terminology of the times. For example, when the word “man” appeared in important documents like the U.S. Constitution, it referred to both men and women. In the 18th century, the term “bald-headed” didn’t refer to someone who doesn’t have hair, but rather someone who has white hair.” 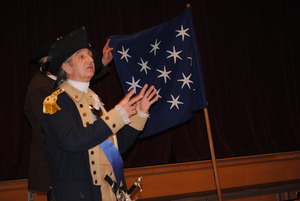 When studying history, Closs said, it is also important to remember how events of the day were viewed at the time. For example, historians consider the Battle of the Brandywine to be a bad loss for Washington and his ragtag army. But at that time, Washington did not consider the Battle of the Brandywine as a loss because they were not routed by the superior British Army, and they lived to fight another day.

“They were farmers and tradesmen fighting for a cause that they believed in and they were not wiped out by the British. From my perspective, it was a chess game, and my goal was to keep my army alive for as many years as possible,” Washington said.

It’s also necessary to keep in mind the era in which an historical figure lived. Washington, for example, was a Virginian who was born into a slave-holding society. He had slaves for most of his life but as he got older he had some of the slaves learn how to read, write, and do math so that they could make a better living when they were eventually freed. In his will, he freed about 110 of the slaves and set aside some money so that they could use it if they weren’t able to make a living.

According to Vernon Ringler, the president of the Oxford Area Historical Association, more than 1,000 students saw one of Closs’ presentations during the school day on Friday.

Ken Woodward, a former principal of the high school who is also the vice president of the Oxford Area Historical Association, said that the program was beneficial for students to learn about an important figure in American history.

“I thought the students were very attentive,” he said. “They asked a lot of great questions.”

Closs’ appearance in Oxford last Friday was made possible because of collaboration between the Oxford Area Historical Association, the Oxford Area School District, the PTOs of each school, and the Oxford Educational Foundation.

Oxford Area Historical Association members Tom DeMott and Ralph Denlinger met Closs at the Brandywine Battlefield about six months ago, and that led to the collaborative effort to make Washington's visit a reality. It was a timely visit, too, because Washington's birthday was a day after the Oxford presentation.

Closs has been a living biographer of Washington since 1997 and has traveled extensively to talk to business groups, civic organizations, and even perform at the occasional wedding reception to in an effort to bring Washington to life for modern audiences. Each July, he portrays Washington at a program at Mount Rushmore. Many of his presentations are at schools, which are his favorite because he loves helping children discover the real George Washington.

“The interactions with children always stand out in my mind,” he said. “With children, it's always new and they ask the best questions. They are eager to learn.”

Students have to learn a lot more in school now, so the time allotted for the study of U.S. history is limited. Even college students have gaps in their knowledge about U.S. history, but it’s important, Closs said, to learn history’s lessons.

“If you don’t know your rights and where they come from, how would you know what it means to be an American?” He asked.

Closs said that it’s an honor to help people learn more about Washington and to learn some of the lessons that the first president can impart on our modern society.

Washington also talked about the virtues of compromise. The founding fathers found a way to work with one another, which is in stark contrast to what happens in Washington D.C. and so many state capitals today.

“In my time, no matter how much you disagreed with the other side, you worked out a compromise,” Washington told the audience. “Today, from what I see, you have all or nothing. The two sides want it all, so you often end up with nothing.”

Washington also had an uncommon humility. According to Closs, when someone would approach Washington and ask him how he managed to win the Revolutionary War, he would be quick to point out that he didn’t win that war—God did. It was only through divine providence that the country was born, Washington believed.

Closs noted that it was certainly fortuitous that the founding fathers—men like Washington, Jefferson, Adams, and Benjamin Franklin were together all at once.

“The wisdom of the founding fathers was phenomenal,” he said. “They all had admirable traits, but they also have—because they are human beings—their downsides.”

Even compared to his highly accomplished peers, Washington stands out for his virtues and leadership.

“The truth is that he is the most admirable of the founding fathers,” Closs said.