The Indians go through their pre-game routine.

Unionville survived a fourth quarter push by Oxford to win a hard-fought game, 37-30, in Oxford last Thursday night. With the win, Unionville improved to 2-1 on the young season, while the Hornets now stand at 1-3 overall.

“I think our intensity was really good tonight,” said Unionville coach Deb Robledo. “We went to the hole better. We were able to be aggressive.” 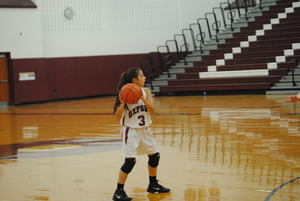 Oxford led 8-6 early on, but Unionville went on a 10-0 run late in the first quarter and early in the second quarter that seemed to put Oxford on the defensive. The Indians challenged the Hornets in the back court on each offensive possession and made it hard for them to move the ball up the floor.

“We were trying to contain {Oxford guard Alex Fernandez}, who is a pretty good point guard, by trapping,” Robledo explained.

During this stretch, Unionville was able to force Oxford into several turnovers that led to points. A basket by Casey Scheuer gave the Indians their first lead since the 2-0 start. Alexandra Shanahan followed with another basket late in the first quarter.

The Indians built a 16-8 until Oxford snapped the run. Fernandez came up with a steal that led to 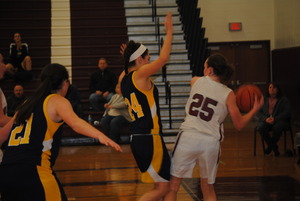 a fast break. The shot wouldn't fall, but sophomore forward Hannah Bahls was there to grab the offensive rebound and score a basket. A few minutes later, Oxford's Melanie Kempf also grabbed an offensive rebound for Oxford and scored. She led all Oxford scorers with 10 points.

Unionville held a 18-12 lead going into the third quarter. That was when Oxford really started making a push. Jumpers by Fernandez and Bahls pulled Oxford to within 2 points. Oxford coach Matthew Messick said that he was proud of the team for settling down and battling back.

“We're a young team and we're going through some growing pains,” he said. “We were able to regroup and come back. It takes guts to be able to fight back like that.” 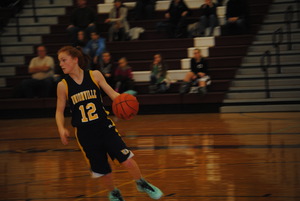 Unionville turned to Taylor Thames to halt Oxford's surge. Thames scored six of her ten points in quick succession in the third quarter and the Indians maintained a 25-21 lead going into the fourth quarter.

“Taylor has been a great player for us,” Robledo said. “She has stamina and she's strong. It's obvious that she's getting more confident.”

Oxford continued to battle in the fourth, but could 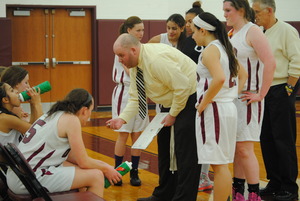 get no closer than pulling to within 28-24 when Bahls picked up a loose ball and scored a basket. In the final two minutes of the game, Oxford was forced to foul to keep stopping the clock. The Indians repeatedly put the ball in Scheuer's hands and the junior guard responded by knocking down seven of eight free-throws to seal the victory. Scheuer finished with 9 points. Thames led all Indians scorers with 10 points. Madison Shanahan netted 6 points and Lexi Shanahan and Micayla Flores each contributed 4 points.

For Oxford, Kempf's 10 points were followed by seven points each from Bahls and Fernandez. Marissa Nadachowski, Devon Nask, and Miranda Kempf each scored 2 points each.

Messick said that, with such a young team, he expects Oxford to improve as games go on and as the season goes on.

“We know that it's going to take our young players some time,” he said. “They work really hard in practice and we have to translate that to the games. We'll see improvement once we get that aggressive mentality."