The Hornets took the field looking for the sixth win of the season—a victory total the team hadn't achieved in 20 years.

With 1:05 left to play in the game, and Avon Grove driving deep into Oxford territory, linebacker Patrick Winters intercepted his second pass of the fourth quarter to halt the drive and preserve a spectacular 27-26 win for the Hornets that is certainly a game-of-the-year candidate for 2013.

Oxford improved to 6-2 with the win, the first time that the Hornets have had a winning season in 20 years. 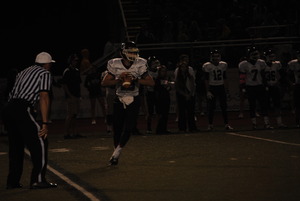 “Pat Winters has the highest football IQ,” said Oxford head coach Mike Pietlock of the game-saving interception. “That’s just him knowing who the hot receiver is and making a play.”

The Avon Grove-Oxford clash last Friday night might not have been the marquee matchup of Week Eight—at least not on paper—but the game offered everything a football fan could want: more than 800 yards of combined offense, crisp tackling, crucial turnovers, and several momentum-swinging plays as the game marched toward its incredible conclusion.

The first big play came midway through the first quarter. Oxford quarterback Ethan Herb dropped back and lofted a pass for wide receiver Cameron Williams, who made a leaping catch over the out-stretched arms of Avon Grove defensive back Kyle Harris for a 41-yard gain. Three plays later, running back Musty Mahmud bolted 10 yards for an Oxford touchdown with 3:52 left to play in the first quarter.

On the other side of the ball, Oxford’s strong defensive attack yielded just 14 yards in the first 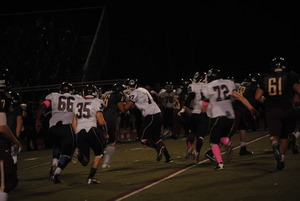 quarter that was one-sided in the Hornets’ favor. Momentum swung, however, when Oxford failed to convert a fourth-and-one opportunity on their own side of the field. Avon Grove’s offense took over at the 35 of Oxford. After a penalty on Oxford gave Avon Grove a fresh set of downs at the 23, quarterback Tanner Peck completed a 13-yard pass to Matt Lawrence. Peck then tossed an 8-yard scoring strike to Austin Radecki, who managed to keep his feet inbounds in the right corner of the end zone. Two penalties on Oxford during the point-after attempts moved the ball inside the 1-yard line and convinced Avon Grove head coach Doug Langley to go for a two-point conversion. Peck plunged into the end zone to make it 8-7.

Oxford went three-and-out on its next drive, setting the stage for one of the many highlight plays in the game. On third-and-six from the 20, Peck dropped back, eluded pressure from the defense and threw a pass to Radecki along the right sideline. The Avon Grove receiver raced 80 yards for the score, giving his team a 15-7 lead with 6:48 to play in the second quarter.

Oxford drove deep into Avon Grove territory on its next possession. But linebacker Andrey Green stopped the drive when he came up with the game’s first interception, picking off an Herb pass inside the 10. The Red Devils would have to march the length of the field to do it, but they were in a position to take a commanding lead.

Instead, an Avon Grove fumble swung momentum back toward Oxford as linebacker Eric Bentz recovered the ball for the Hornets and returned it to the 1-yard line. Following a false start penalty on Oxford, running back Zach Deasey bolted six yards straight up the middle to score the touchdown, making it 15-14. Deasey had a productive game, racking up 52 yards on 12 carries. 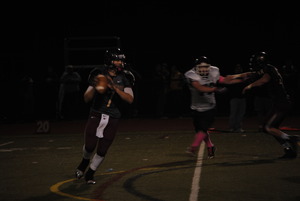 After Avon Grove went three-and-out on its next possession, the Hornets had a chance to reclaim the lead. Herb connected with Williams for 23 yards and on the very next play went back to him for 27 yards, moving the ball all the way down to the Avon Grove 38. Williams caught four balls for 96 yards on the day. An 18-yard pass play from Herb to wide receiver Devon Sumner moved Oxford inside the Red Zone with 26 seconds left in the second quarter. Two plays later, Herb fired a ball into the end zone, but it was tipped and Green came up with Avon Grove’s third interception of the game.

Avon Grove got the ball to start the second half, but a fumble that was recovered by Sumner gave Oxford the ball at the 44 of Avon Grove. Soon the Hornets were facing a fourth-and-four and another big decision. Pietlock decided to go for it, but once again Oxford came up just a little short and the ball went back to Avon Grove.

Peck wasted no time getting back to work. He found Radecki open along the right sideline again, good for a 34-yard gain, and then went right back to Radecki for six more yards. A five-yard slant to John D’Aquanno followed, setting Avon Grove up at the 14. Two plays later, Peck threw a 12-yard touchdown to D’Aquanno. The two-point conversion by Taylor Kim made it 23-14.

Oxford roared right back, this time allowing the ground game to move the ball down the field. Deasey turned in a great run, breaking tackles and fighting his way for a 13-yard gain. Then Mahmud, who rushed for 70 yards on 16 carries, picked up 21 yards to move the ball inside Avon Grove territory. Once again, however, the Hornets would be facing a fourth-and-short that they couldn’t pick up against Avon Grove’s tenacious defense.

The Red Devils took over on their own 18 with 4:06 left to play in the third. On first down, Peck 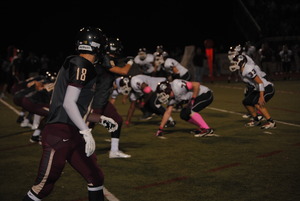 looked for Radecki, his favorite target, and once again connected with him on a big play down the right sideline. Radecki picked up 36 more yards. On the day, he hauled in seven catches for 173 yards. Peck, meanwhile, was 18 of 31 for 305 yards.

When Peck threw to Jake Parola for a 25-yard gain, Avon Grove was at the 11. Back-to-back carries by Peck moved the ball to the four. With less than a minute to play in the third quarter, a touchdown by Avon Grove could give the team an insurmountable lead. Oxford’s defense rose to the challenge with Bentz sacking Peck back at the 10 for a six-yard loss. It was fourth down and Avon Grove opted to try a field goal. Anthony Scarpato booted a 27-yarder to make it 26-14.

There were 49 seconds left in the third quarter which, in this game, was plenty of time for more excitement. Herb found Ryan Hubley open for a nine-yard gain. Then he tossed a deep pass to Sumner who got behind the defenders, caught the ball in stride, and raced 61 yards for the touchdown. Avon Grove’s lead was down to 26-21 with one quarter left to play.

Peck engineered another good drive into Oxford territory but Winters picked off a pass to give Oxford the ball at the 42. Four plays later, Herb threw a pass to Hubley in the middle of the field. He caught the ball at the 30, found running room, and raced all the way into the end zone for a 55-yard score, giving Oxford a 27-26 lead.

Pietlock praised Hubley for his effort on what turned out to be the game-winning touchdown.

“He’s a heck of a football player,” Hubley said. “He doesn’t give up on a play until the whistle blows.”

There wasn’t any quit in Avon Grove, either. With 4:34 left, the Red Devils were facing a fourth-and-ten from the 40 of Oxford. Peck dropped back to pass, but was pressured by two Hornets. The quarterback avoided the pass rush and found Parola open in the middle of the field for a 20-yard gain.

On the next play, Peck opted to run and scrambled to the eight-yard line. Three plays later, Avon Grove was facing another fourth down and sent in the field goal unit to attempt a three-pointer for the lead. The kick was no good and Oxford took over with 2:59 left to play.

The Red Devils utilized their remaining timeouts during Oxford’s next offensive series as the Hornets called three straight running plays. Hubley’s punt gave Avon Grove the ball at the 42 with one more chance to win the game.

Peck completed an 18-yard pass to D’Aquanno right away to again move into Oxford territory. Oxford got flagged for a holding penalty and the ball was at the 24. Peck scrambled 12 yards to move the ball to the 12 and pick up another first down. On the next play, Peck looked for an open receiver in the end zone but Winters read the play and picked the ball off. He returned the ball to the 10. Herb took a knee twice to run off the final 1:05 to seal the victory for Oxford.

Pietlock said that he expected Avon Grove to give them a tough game.

“We knew that their offense was going to present a challenge for us. They throw the ball a lot and not many teams do that.”

Oxford’s aerial attack was impressive, too. Herb completed 12 of 16 passes for 290 yards. He overcame a difficult first half when he threw three interceptions. The Hornets’ talented receiving corps of Hubley, Williams, and Sumner each tallied more than 90 yards.

Pietlock said that he felt like his team was too anxious at times, but they never panicked, even when they were down 26-14 in the third quarter.

Oxford’s sixth victory means that the Hornets will finish with a winning record for the first time since 1993. They will finish the season with games against Sun Valley (2-6) and at Unionville (6-2). 2013 has already been a special season, but Pietlock said that the team isn’t content with six wins. If the team wins its next two games, a playoff berth could be in the offing.

“It’s something good to be a part of,” Pietlock said.