The return of a Halloween tradition Who would think that an orange, strange-looking squash would generate both an unofficial holiday and a multi-billion dollar industry?
Over many decades, the ritual of Halloween -- with carved pumpkins, masks and spooky outfits -- has become one of the most celebrated events on our calendar. The common pumpkin is native to North America, the oldest evidence being seeds dating back to around 7,000 B.C. The word pumpkin originates from the Greek pepon, meaning “large melon.” Adapted by the French to pompon, the English to pumpion and later by colonists to its present spelling, this ancient vegetable is now the symbol for a season of giving thanks, retrospection and, yes, a night of fun. 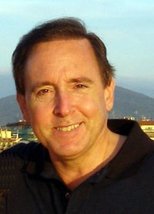 Halloween is big business; it accounts for roughly $2.6 billion in annual sales in the United States alone. Approximately 1.5 billion pounds of pumpkins are produced domestically each year. The largest pumpkin-generating states are Illinois, Indiana, Ohio, Pennsylvania and California.

Millions of parents around America visit rustic orchards and farm produce stands to purchase what will become a source of fun and excitement in the days leading up to Oct. 31. Pumpkin carving originated in the 1600s in England, where the term “Jack-O-Lantern” came into use to describe the light flickering over peat bogs, a phenomenon sometimes called “Will-O-the Wisp” in British folklore. In the 19th century, revelers in Ireland and Scotland often carved strange faces and figures on turnips and other vegetables to represent spirits coming to life around the time of the autumn harvest.

The term Jack-O-Lantern came to be used in America in the 1830s. Noted poet John Greenleaf Whittier even wrote a poem titled “The Pumpkin”: “…When wild, ugly faces we carved  in its skin … Glaring out through the dark with a candle within!” 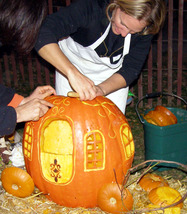 who had a terrifying encounter with the devil.  Jack later wandered the earth, searching for a place to rest as he carried a hollowed-out turnip holding a glowing ember.

Superstitious people over the centuries tried to protect their homes and families with Jack-O-Lanterns as a way to ward off evil spirits and  even vampires. The more grotesque the images, the better they served to scare away loathsome entities.

Thus began a trend which has lasted up to the present day. Pumpkin carving events around the Chadds Ford area started to attract attention when Andrew Wyeth began displaying carved pumpkins in the 1970s around the Chadds Ford Inn. His creations became so popular that the event eventually moved to the grounds of the nearby Chadds Ford Historical Society, where it has been thrilling people of all ages for more than two decades. 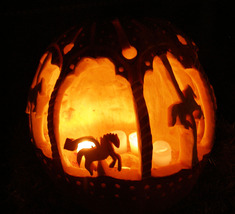 The 2013 Great Pumpkin Carve will take place at the Chadds Ford Historical Society, behind the Barn Visitor Center (1736 Creek Rd., Chadds Ford), from the evening of Oct. 24 through Oct. 26, from 5 to 9 each night. More than 60 carvers will delight viewers with their wildly sculpted creations. There will be hayrides and live music, as well as food and beverages sponsored by the Concordville-Chadds Ford Rotary.

This year will include a new event, the Haunted Trail, 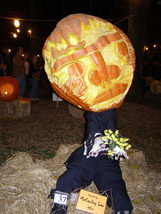 where kids of all ages can wander through a spooky path featuring ghosts, goblins and flying creatures known to inhabit the netherworld around All Hallows’ Eve. In addition, there will be “A Not So Scary Halloween,” a reading of stories at the historic John Chads House, across the street from the barn, on Oct. 27 at 4 p.m. All are encouraged to come in costume and parade around the grounds to ward off any spooky uninvited guests.

For more information, call the Historical Society at 610-388-7376 or visit www.chaddsfordhistory.org.

Gene Pisasale is an author and lecturer based in Kennett Square. His six books focus on local history. Gene’s latest work is “The Forgotten Star,” which delves into the War of 1812 and true-life mysteries surrounding 'The Star-Spangled Banner.' Gene will be conducting his lecture on the War of 1812 on Oct. 15 at the Swarthmore Public Library, and one on the Civil War on Oct. 19 at the Bayard Taylor Library in downtown Kennett Square. Both events are free and open to the public. Gene can be contacted at [email protected] Visit his website at www.GenePisasale.com.