A concern for the past unites Winterthur artists Who knew there was so much creativity shared by people who work at Winterthur?

"The Artists of Winterthur: A Collective Exhibition," which opened on Sept. 6 at the Oxford Arts Alliance, puts a spotlight on artists who have an admirable artistic range, and a common commitment to celebrating - and preserving - the past. 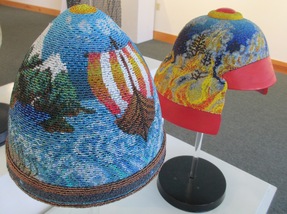 beaded helmets copied from headgear of ancient civilizations, each one embellished with elaborate scenes inspired by their respective cultures. Each one is a little masterpiece. Grigsby's smaller beadwork pieces are equally impressive. "Water Ways: Rocks and Falls" spills off the edge of a table, and "Koi and Water Plants" manages to recall the colorful swirl of an underwater scene.

Elsewhere, Lindsay Grigsby shows three interesting wooden wall pieces - two resemble planets in orbit, and a "wall table" is embellished with knobby little somethings that give it an offbeat charm. 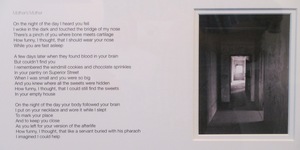 Natalie Caccamo's "Project (W): The Creamery Series" features black-and-white photos of an abandoned creamery building on the Winterthur grounds. The images have great atmosphere, particularly "Fresh Cuts," in which posters detailing various cuts of meat hang on a wall over an ominous-looking floor drain. A stack of small, matted photos by Caccamo are very affordable, and each one is a jewel.

Caccamo is also the photographer for "Ghost Stories," a very fine series that unites her photos with supremely skilled poems by Amy Marks Delaney. The mother's lament about a child becoming independent ("Love Song"), and a memory poem about a grandmother's death ("Mother's Mother") are guaranteed to rivet you to your spot in the gallery as you read.

For extended browsing, there's a colorful rack of homemade scarves by Joy Gardiner, and a large selection of very creative jewelry by Lynn Hoyt. 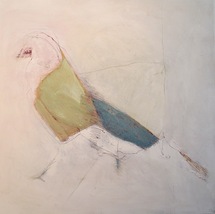 Mimi Peterson, of Kennett Square, has three sketchy oil-and-wax paintings of birds that are splendidly subtle, and they function well as a trio. Harold Kalmus shows two plaster panels that look like ancient artifacts, and his two-piece bronze, "Julia Meets the Crocodile," has drama, mystery and sinuous appeal.

Raun Townsley's concern with how time alters objects and places is shown in four well-composed photos of crumbling buildings, and by a monumental coat rack made from salvaged wooden planks and huge iron hooks.

Lauren Fair shows a rooster painting with newspaper collage background, a painted stoneware bowl, and a drawing series in which a standing flat iron morphs into a standing mouse, without losing its basic shape.