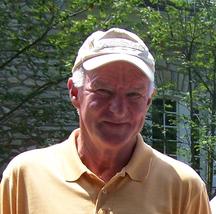 He was the husband of Patricia Leach Kofke, with whom he shared 43 years of marriage. Born in West Chester, he was the son of Carole Jones Kofke of Glen Rose, Texas, and the late William L. Kofke. He  was a 1967 graduate of Downingtown High School and attended West Chester University for three years. He was the owner and operator of Wayne E. Kofke, Inc., a siding company, which he founded in 1972. He was a member of the Downingtown Country Club, and was an avid golfer. He enjoyed listening to sports, and being with his family. He was always thinking of and helping others.

A funeral was held June 9 at the Bethany Presbyterian Church in Mendenhall. Burial was private.

In memory of Wayne, a contribution may be made to URA SPORTS, c/o Treasurer, 1009 Lambourne Road, West Chester, PA 19382.

Charles "Chattie"  A. Bush, 81, of New London, passed away on June 4 at Brinton Manor in Glen Mills, Pa.

He is survived by one brother, J. Paul Bush of West Grove; one sister, Helen Downing of Kelton; two nieces; four nephews; several great-nieces and nephews; and one great-great- nephew, Tucker Beau Clary.

A funeral was held June 8 at the New London Presbyterian Church. Burial was in the adjoining  church cemetery. 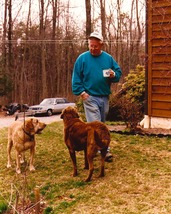 Wallace Henry Clay ("Wally"), 75, passed away on June 1 in the home he shared with wife of 52 years, E. Wilhelmina (Finley) Clay in Nottingham, Pa.

He loved Chesapeake Bay retrievers, and was very active in rescue organizations.  He raised and fostered many "Chessies" over the years, as well as several Jack Russell Terriers. More recently, he became very active in colon cancer support organizations, and wrote of his experiences in several blogs and online groups. He counseled and inspired others through his positive outlook and sense of humor.

He is survived by his wife and five children: daughter Kelli Boyd of Oxford; son Kevin Clay of King of Prussia; son Kyle Clay of Downingtown; daughter Kirstan Baxter of Wilmington, Del.; and son Jeffery Clay of Nottingham; 14 grandchildren; and one great-grandchild. He is also survived by brothers David Clay of Toledo, Ohio; Alan Clay of Melbourne, Fla.; and Carter Clay of Pemberville, Ohio; and by his best friends Rebel, Jack, Gilly, Dumpy, and Frodo. He was preceded in death by sisters Marilyn Beverly of Rochester, Mich., and Pat McDole of Melbourne, Fla., and by his beloved Chessies, Knuckles and Chelsea.
A memorial service was held June 10 at the Edward L. Collins, Jr. Funeral Home in Oxford.

In lieu of flowers, donations in Wally's name may be made to the American Cancer Society and/or Chesapeake Bay Retriever Relief and Rescue (via www.cbrrescue.org).

Earl "Bud" G. Miller, Jr., of Avondale, passed away on June 4 at the Jennersville Regional Hospital.

He was the husband of Marlene Bertrando Miller, who passed away in 1995, and with whom he shared  31 years of marriage. Born in Kennett Square, he was the son of the late Earl G. Miller, Sr., and Mary Blanche Moore Miller. He was an inventory control clerk at the NVF Company in Kennett Square for 37 years. He enjoyed playing bingo, watching sports on TV, going to horse races and going to different restaurants for lunch.  He was a Member of St. Gabriel of the Sorrowful Mother Church.

He was predeceased by one sister, Elsie Rzucidlo. He is survived by many nieces and nephews.

A funeral was held June 10 at St. Gabriel of the Sorrowful Mother Church in Avondale. Burial was in St. Patrick's Cemetery, Kennett Square.

In memory of Bud, a contribution may be made to the Friends Home, 147 West State Street, Kennett Square, PA 19348.

Vivian D. Oliver, 81, of Elkton, Md., went home to be with the Lord on June 5 at home, surrounded by her loving family.

Born in West Grove, she was the daughter of the late Bernie Lee Letterman and the late Ella (Johnson) Letterman. She was the beloved wife of 63 years to Claude W. Oliver, who passed away in 2011. She retired from Calvert Manor Healthcare Center, Rising Sun, Md., after 18 years of service as a healthcare aide. She was a member of Calvary Baptist Church in Rising Sun.  She enjoyed cooking, reading and writing letters. In previous years, she liked spending time volunteering as a candy striper at Jennersville Hospital and training new volunteers to become candy stripers. She was dedicated to caring for others in their time of need.

Survivors include a son, Ron Oliver and his wife Sandy of Oxford, Pa.; a daughter, Carol Mullins and her husband Roger of Elkton, Md.; five siblings, Wayne Letterman of Kirkwood, Pa., John Letterman of Oxford, Jane Richey of Nottingham, Gerald Letterman of Quarryville, and Bruce Letterman of Newark, Del.  She was a loving grandmother of 10 and great grandmother of 19. She was preceded in death by her daughter, Kathy Carter; brother, B.L. Letterman, Jr.; and sisters, Evelyn Brooks and Lois Greer.

A funeral was held June 8 in Rising Sun, Md. In lieu of flowers, contributions may be made to Calvary Baptist Church, 35 Sylmar Road, Rising Sun, MD 21911.

Richard Eugene Simon, 59, passed away in Mesa, Ariz., on April 4 after a lengthy illness.

The son of the late Katherine Rebecca Walls Simon and Harry Eugene Simon, he was born in Oxford and attended Oxford Area High School. He loved animals, especially dogs and cats and, throughout his life, cared for and fed every stray that came his way. He also loved to fish, ride his motorcycle and was a racing enthusiast.

Douglas W. Kowal, 52, of Downingtown, passed away on June 9 at the Brandywine Hospital.

Born in Wilmington, Del., he was  the son of Nicholas D. and Patricia Dilley Kowal of Kennett Square. He served his country in the U.S. Army.

A visitation with family and friends will be held from 10 to 11 a.m. on June 14 at the Kuzo  & Grieco Funeral Home (250 W. State St., Kennett Square) .  His funeral service will follow at 11 a.m. Burial will be in Longwood Cemetery, Kennett Square.