Jim McLeod, the head of the Parade Committee that organized the event for the Oxford Area Chamber of Commerce, noted that, with the slight chill in the air, it was a perfect evening for a Halloween Parade. 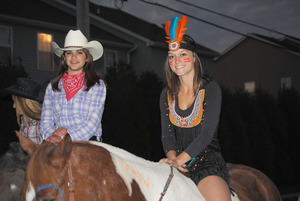 Indeed, an estimated crowd of 3,000 people filled the streets of Oxford by the time the parade started at 7 p.m., making this the largest Halloween parade yet.

McLeod said that organizers were amazed at the tremendous artistic talent that went into all the costumes, floats and performances, and he thanked everyone who made the event a success.

Awards were handed out in various categories.

The Oxford Area High School (OAHS) Class of 2015 earned the Best Overall Float Award with its “Toy Story” float that amazed crowds at both this parade and the high school's Homecoming parade.