The Octoraro Hotel & Tavern, the venerable building on South Third Street in Oxford, was severely damaged in a Tuesday fire that swept through the whole restaurant.

The fire began just before noon and was announced as an appliance fire, with the source being traced to the restaurant's fryer. The Union Fire Company of Oxford, first to arrive on the scene, saw that smoke was showing from the building. 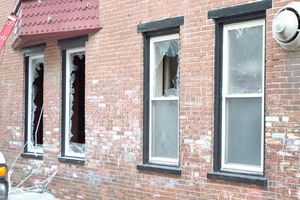 Fire Chief Brian Kelley said that four employees of the restaurant were in the building at the time of the fire, but that there were no patrons present. No one was hurt in the fire.

Kelley said that because there are apartments above the restaurant and since crews did not know whether the apartments were occupied at the time, the incident was upgraded to an entrapment fire. Soon after, engines arrived in the alleyway adjacent to the restaurant and pulled a tack line of hose into the restaurant, where the fire was kept in check in the kitchen and bar areas. Kelley said that it took approximately 20 minutes to contain the fire in the kitchen area.

At about that time, the second engine arrived to begin a search on the second and third floors, which revealed that no one was inside any of the apartments during the fire.  The residents of the apartments will be displaced. Kelley said that representatives from the Red Cross will meet with the fire company on Wednesday. 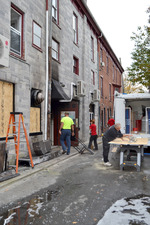 Originally built in 1827, the building has served many purposes in its 187 years of operation. Originally a hotel, it served as a stagecoach stop for passengers between Philadelphia and Baltimore. It later became a girls' boarding house, a funeral parlor, a hotel again, and then a restaurant, which was sold in 2011, refurbished and reopened in 2013.

Public reaction to the fire was swift. On the restaurant's Facebook page, several patrons expressed their relief that no one was hurt in the fire. At 12:38 p.m., Oxford Mainstreet, Inc., posted, “The fire came in like a lion, the windows may be busted BUT your spirits WILL NEVER be broken. YOUR community LOVES you and is standing along side of you. This is our opportunity to give back to you...because YOU have given so much to us! The OTE is the heart of our community in Downtown Oxford! Don't you forget that!”