The Southern Chester County Chamber of Commerce's annual luncheon, held Oct. 16 at the Hartefeld National Golf Club, provided a forum for six candidates to share their ideas before an audience of local business leaders.

The event, “2014 Election Perspectives: Facing the Challenges That Affect Your Bottom Line,” gave State Reps. John Lawrence, Chris Ross and Stephen Barrar, as well as their challengers Ann Scott, Susan Rzucidlo and Whitney Hoffman a five-minute period to reflect on how the tenets of their platform will affect business leaders in the region. In an election that will be held Nov. 4, Schott is opposing Lawrence in the race for Pa. District 13; Rzucidlo is facing off against Ross for Pa. District 158; and Hoffman is challenging incumbent Barrar for the 160th District. The panel was moderated by Kennett Square architect and community leader Dennis Melton. 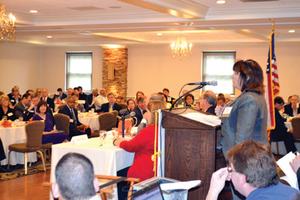 Lawrence said that he has been a part of legislative team that has delivered several initiatives that he felt have helped small business owners in Pennsylvania, one of which has been the elimination of the death tax for small business assets family farmers.

“Think about how many family farmers here in Chester County who, when Grandpa passes away, have to sell the farm in order to pay the taxes,” Lawrence said. “That's not what we want to see.”

Rep. Lawrence said he has also been a strong supporter of the Education Improvement Tax Credit Program -- which gives businesses the opportunity to give educational incentives to low-income families. Lawrence also said that one of the biggest fiscal issues facing the Commonwealth is the state pension system, which he said, “has been underfunded to the tune of $50 billion, which will affect everyone in the County.”

A recently retired public school teacher in the Unionville-Chadds Ford School District, Schott emphasized the issue of education and that attracting the best employees depending on availability from a strong base of schools, who can help usher students through a post-secondary education that she said is vital in order to earn a good wage and raise a family.

Saying that across-the-board cuts in school funding in the sate have severely impacted the growth of education in the Avon Grove, Octotrara, Kennett and Oxford school districts.

“From knocking in hundreds of doors and speaking at events like this one, I can tell you  there is a real concern out there about where our state is headed relative to education. I think its a concern that many of us in this room share, especially in the business community.”

She said that  in April, the Federal Reserve Business Outlook Survey asked employers to identify the biggest barriers to their growth. The number one choice offered by 60 percent of respondents was the availability of a skilled work force.

“Your businesses need workers who can analyze a problem and break it down, who can work both independently and as a team,” she said. “Preparing students for success in our local, regional and global economies is of paramount concern. Meeting that challenge requires great teachers, a strong curriculum, and yes, it requires resources.”

“We don't need 85 programs. It's just confusing. We need to look at our economic development  programs more equitably, to make sure we're not over-favoring an outside company to come in from out of state and giving them tax advantages and an economics advantages over local companies.”

In order to boost funding for the state's education system, Ross proposed what he called a “reasonable” Marcellus Shale tax, fully dedicated to paying down the unfunded liabilities in the state's pension program. He also proposed that new hires to shift to a tiered defined contribution plan, which will also  control costs.

“If we don't address this, the schools will be shorted out with their funds, and we're going to have continued increased class sizes,” he said. “We're also going to have all of the taxes currently generated siphoned off on the state, so that there will be no money available to support the necessary programs we've got. Finally, property taxes are going to be forced up dramatically, if we don't address this problem.”

Proclaiming that “all budgets reflect values,” Rzucidlo stressed that recent budgets drawn up in Pennsylvania have not been done with the small business owner in mind. Instead, she said that these  budgets have reflected the values of high dollar donors, to political campaigns to organizations and companies who are looking at the natural gas extraction in the Marcellus Shale from a pure profit margin, with no thought of reinvesting those profits in the state.

“We were sold a bill of goods,” Rzucidlo said. “We need to invest here and make sure that Pennsylvania is a place where people can start a business, grow a business, start a family, grow a family, grow old here, and have children who will stay here. That's what Harrisburg needs to look at.”

Confident in the belief that Pennsylvania needs to turn in another direction, Rzucidlo said that more funding is needed for education.

Rep. Barrar said that he reinforced the comments expressed by Lawrence and Ross. “I ran as a state representative to become an advocate for small business,” he said. “I felt that our tax structure, and our regulatory costs of the state were getting ay too high, and someone needed to go to Harrisburg to be a small business advocate. I felt I was the right person. I've been here for 18 years and I've never let my guard down.”

Following their remarks, candidates were asked to respond to answers posed by the audience, which included what they felt were the key issues concerning education; how their voice would help the Latino community; their opinions on the graduated income tax being proposed by Tom Wolf, who is opposing Gov. Tom Corbett in the race for Pa. Governor; and what programs their office would initiate for seniors in their respective districts.

Kendal-Crosslands Communities served as the event's presenting sponsor. The reception was sponsored by WSFS Bank.