A new chapter in the life of the 230-year-old Oxford Library began at approximately 10:10 a.m. on October 10, as nearly 100 supporters gathered for the official groundbreaking of a 4,000 square-foot expansion project. In quick order, library officials welcomed the community to the celebration, Frank Spor eagerly scooped the first shovelful of dirt, and workers began using heavy equipment to move earth so that the foundation can be set. 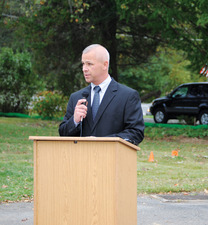 If all goes well, a project that has been in the planning stages for more than a decade will be complete by this time next year.

Spor, the president of the Oxford Library Company’s Board of Trustees, joked that it was only appropriate that the groundbreaking ceremony was taking place on the tenth day of the tenth month since it took ten years to get the project underway.

“This expansion project took many years to come to fruition,” said library board member Jamie Cole during his welcome address. “This project would have never been possible without the unwavering support of the Oxford community. We could not have done this without you.”

Once the expansion project is completed, the library’s main stacks will be moved to the new wing. The children’s library will be moved from the lower level to the upper level, freeing up space on the lower level for meeting rooms that will be available to the community, an expanded history room, and a bookstore for the Friends of the Oxford Library. A new entrance will link the existing building to the new construction. There will be some more parking spots and a rear entrance to the library as a result of the project. The total budget for the expansion is approximately $1.3 million.

Nowland Associates, Inc. is handling the design and construction work on the project, and owner Jeff Nowland has a personal connection to the library—he noted at the groundbreaking that his two children are library card-carrying members of the Oxford Library. 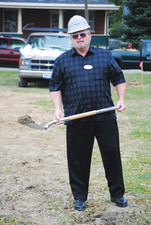 Nowland said that his company is in the background for projects like this. But, according to library officials, Nowland has been a driving force in the project. Spor credited Nowland with working with them to develop plans that the library can afford to implement. Nowland has also been reaching out to the local business community to keep them involved in the project, including relying on local businesses for building materials whenever it’s possible.

Cole thanked the many Oxford Borough officials who helped get the project to this point. Virtually every department in the borough has been involved in one way or another.

“I’m happy to be here to celebrate another milestone of the Oxford Library,” Henry said. “This project will surely enhance the quality of life in Oxford.”

Perhaps no one was more excited about the expansion than library director Carey Bresler and the staff.

The extra 4,000 square feet of space will allow for more programs and activities. Libraries are no longer places to just check out books or magazines. Now, patrons are just as likely to want to use public computers, download books on eReader devices, or simply utilize the library as a place to get work done during the day.

Linda Teel, the circulation supervisor, said that patrons will benefit from the expansion in many ways. She said that she often receives calls from people asking if they can hold meetings for a group at the library. There simply isn’t enough space now, but that will change as a result of the project. Library officials also talked about wanting to give Oxford residents a library that meets their needs.

“The community has been so wonderful, so supportive of us,” said Teel.

Library officials are confident that that support will be rewarded when the renovated library is unveiled.

Like Spor, Carol Hauser is a longtime library board member who was involved with the early planning for the project.

“We knew that we needed more room,” Hauser said, explaining that initially neighboring properties weren’t available for purchase. For awhile, library officials looked at the possibility of adding space while working within the confines of the property that the building is currently situated on. Officials even explored the possibility of moving out of town.

Two properties eventually went up for sale and the Oxford Library Company was able to purchase them, paving the way for the project. At one time about five years ago the library launched a capital campaign to fund the expansion, but the economic recession thwarted that effort, at least temporarily.

Hauser said that library officials have spent most of the last decade working on plans of one kind or another.

“We’ve been actively working on this project during that time because there were always plans,” she said.

Gail Pietrzyk, a volunteer with the library, said that the library board should be commended for continuing to push for a project that will allow the library to better serve the community.

“We’re thankful that the library board has remained focused on providing these services to the community,” Pietrzyk explained. “We’re excited to be breaking ground.”

The excitement was widespread among those who attended the ceremony. There were smiles all around.

“I looked around during the ceremony and all the board members were smiling,” Hauser said. “This is wonderful.”

Hauser added that some people who worked very hard to get the library to this point weren’t at the Oct. 10 groundbreaking. She specifically mentioned longtime board member Ruth Holmes.

“She has worked so hard for us through the years,” Hauser said.

While the groundbreaking ceremony was an occasion to look forward, plenty of attention was paid to the library’s history, too. The library was founded in 1784 and is the third-oldest library in Pennsylvania.

Spor said that Dr. John F. Rose, a 28-year-old doctor in town, was the first one to buy shares when the Oxford Library Company was started more than 230 years ago. Shares were sold for $5 each until 1914, when Clara Webster purchased the last share. Spor said that they want to honor these Oxford residents who are responsible for getting the library started when the new wing is added.

A few weeks before the groundbreaking, library board member Sue Cole talked about how pleased they were to be able to show donors how their money is being spent to improve the community. Now that the expansion project is underway, library officials are hoping to raise $550,000 as part of a capital campaign.

“All support will be valued and used for a good purpose,” said Pietrzyk, noting that “there’s always a financial need for libraries.”

“Everybody, continue to support the library—your library,” said Jamie Cole toward the end of his welcome address.

As workers gathered nearby and the heavy equipment was moved into place to start moving earth, Cole concluded his remarks by saying that the much-anticipated project would soon transform the library.

“Make a mental note of these surroundings,” Cole said. “They are not going to look the same.”

Sets of plans for the expansion are on display at the library at 48 South Second Street and online at www.oxfordpubliclibrary.org.