The wait is over.

The much-needed and long-anticipated expansion of the Oxford Library will officially get underway with a groundbreaking ceremony at 10 a.m. on Friday, Oct. 10 as local officials gather to celebrate the start of the project. The public is invited to attend the event, which will include refreshments and a brief ceremony.

Frank Spor, the Oxford Library Company Board of Trustees president, said in an interview last week that the 4,000-square-foot expansion will help the library serve the community better by providing extra space for a variety of programs and activities. Nowland Associates, Inc. is handling the design and construction work on the project, which is expected to be completed in 2015.

“I'm really excited about the project getting to this point,” said Spor.

When the addition to the library is completed, the main stacks of the library's adult section will be moved to the new wing so that the children's library can be moved from the lower level to the upper level. The lower level will then be used for a variety of community functions, including meeting rooms for community groups and non-profit organizations. The Friends of the Oxford Library will have room again for a used bookstore. There will also be a larger history room with climate control to protect the holdings. The designs include the construction of a new entrance that will link the existing building to the new construction. There will be some additional parking added during this phase of the project, as well as a rear entrance to the building—something the library has not had.

“It's really going to be an amazing thing for the community,” said Sue Cole, a member of the Board of Trustees.

Cole said that library officials and staff are continually in communication with patrons to stay informed about what they want and expect from their library. For example, a focus group was formed to specifically find out how the library could serve teenagers better.

Library director Carey Bresler is very enthusiastic about the project.

“I'm really excited about several aspects of the expansion of the library,” she said. “The lobby will provide a welcoming entrance and extra space to display items of community interest. The new adult section will offer more quiet reading space and a better arrangement of our collection for browsing and locating library materials. The extra space will also allow us more room for bigger and better programs.”

The 4,000-square-foot addition to a building of approximately 7,000 square feet will certainly increase the programs and services that the library can provide. The library currently offers a wide variety of programs, ranging from Music and Me classes to mother-and-daughter book clubs to ESL lessons to Story Time programs to book-signings by local authors.

Sue's husband, Jamie, who also serves on the library board, said that a library of the 21st century has to be a community center, not just a place to borrow books, magazines, or DVDs. Cole said that the library wants to offer more access to computers and eReader devices, as well as workstations for patrons to use. 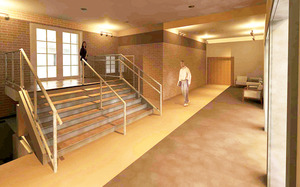 All these amenities and services have to be delivered in a cost-effective manner.

Spor praised Nowland Associates, specifically its owners Jeff and Giff Nowland, for their help in keeping the project as cost-effective as possible.

“They've gone well beyond what you would normally get from a contractor,” Spor said. “It's been a really good relationship.”

Jamie Cole said that Jeff Nowland is a local resident who is part of the community. He has been very active in getting other businesses in the area involved with the project.

The company is also going to be as courteous as possible once construction on the new wing begins.

“Nowland Associates is determined to minimize disruptions to patrons during the project,” explained Sue Cole.

The groundbreaking is something that Spor has been looking forward to for a long time. A 15-year veteran of the library board, he explained that the need for an expansion was first identified more than a decade ago.

“We recognized the need for more space ten years ago,” said Spor. “It hasn't exactly been an easy ten years. This project has been well-thought-out, planned, and then changed again.”

There were several starts and stops, due in part to the struggling economy that made fundraising difficult. A feasibility study was conducted. Two properties adjacent to the library were  purchased and plans for the expansion were drawn up, but later had to be reworked to focus on only those things that would enhance a patron's experiences at the library.

Spor credited the library's small but dedicated staff with making the library a comfortable, inviting place for local residents who use it. The staff, in particular, is looking forward to having the additional space so that the library is providing the services that the community wants.

“We have the best staff here. We're meeting the needs of the community, but it's getting harder and harder without the space that we need,” said Spor. “We don't get a lot more space for books with this project, but what we do get is more useful space for a lot of different things.”

“Our patrons are accustomed to helpful service to overcome some of the limitations of our facility,” Bresler said. “I think the community will be pleased to have a building that matches the level of service we provide.”

After years and years of work and planning, Spor is relieved and excited that work is finally about to begin. He said that since Jamie and Sue Cole joined the board within the last year there has been a real push to get the project moving forward again.

Sue Cole noted that during the lengthy process when the library has been planning the expansion, the community has been tremendously supportive by donating approximately $778,000 that will go a long way toward making the expansion a reality.

Cole said that the library board is very pleased that they can show that progress is being made to people who have already made a donation for the expansion project, and she's hopeful that others who use the library or see value in it will contribute as well.

“What we're looking to do is make a physical change so that people can see how the money they donated is being spent,” Cole said. “It's going to be an amazing feeling to see the changes. We are very grateful and we want to make our donors proud to be a part of this exciting improvement in the Borough of Oxford.”

Library officials are hoping to raise approximately $550,000 during a capital campaign.

The total budget for the expansion project is $1,328,700, and library officials say that this expenditure will provide Oxford with the library that it deserves.

Sue Cole said that support for the project is building in the community. One recent example: The Oxford Rotary Club is staging a Casino Night on Oct. 25, and the Oxford Library will receive proceeds from that event.

Once the construction work is underway, library officials expect the excitement about the project to build until a new, gleaming library makes its debut.

A set of plans for the upcoming project are on display at the library. Information is also available on the website at www.oxfordpubliclibrary.org.

The Oxford Library, which is located at 48 South Second Street, was founded in 1784 and is the third-oldest library in Pennsylvania.