Before an overflow Kennett High School Homecoming crowd, Kennett High School athletic coach Nathan Kindig, and Shirley Annand, a longtime member of the Kennett Consolidated School District, became the latest people to be inducted into the districts Legacy Fields during halftime ceremonies of the Oxford-Kennett football game on Sept. 19. 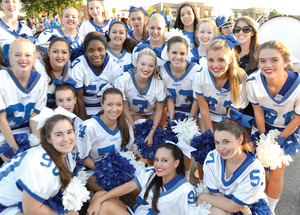 Annand, who served on the district’s school board for 26 years before retiring in October 2012, was accompanied by her daughter, Patty Body, at the ceremonies. 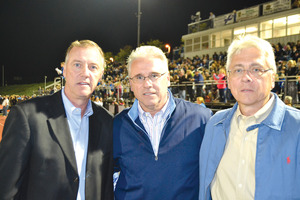 Homecoming festivities got underway in the school’s parking lot, as a parade wove its way up Broad Street, onto Mulberry Street, onto Union Street and finished back at the high school. Groups and organizations represented in the parade included the Kennett Square Police Department, the Kennett band and cheerleaders, superintendent Dr. Barry Tomasetti and members of the KCSD school board, floats from all four classes at Kennett, the Homecoming Court, as well as students from the Kennett Middle School and both New Garden and Bancroft Elementary Schools.

Following a halftime performance by the Kennett Marching Band, students P.J. O’Sullivan and Kirsten Sharp were named as Homecoming King and Queen.