The Avon Grove High School Marching Band led the parade to the stadium.

A little rain couldn’t dampen school spirit as Avon Grove High School concluded a week of Homecoming activities with a full day of events on Saturday, Sept. 13. Maroon and gold was everywhere as a large crowd turned out to watch the Homecoming Parade move along State Road on its way to the school campus.

The award-winning Avon Grove High School Marching Band led the way, followed by members of the Homecoming Court, the cheerleaders, floats of various clubs and sports teams, and fire trucks. Each class in the school decorated a float with a Disney theme. The senior class chose “Aladdin,” while the junior class float featured “The Little Mermaid.” Sophomores decorated their float with “The Lion King,” while the freshman class selected “Up.” At halftime of the football game, the senior class float was selected as the best one. 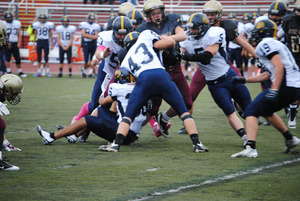 Moments before Avon Grove High School principal Tom Alexander made his speech, he talked about how the Homecoming celebration is a highlight of every school year because there is so much school pride.

Alexander has been the principal of the high school for more than ten years, and said that this year’s Spirit Week was the best one yet, with a vast majority of the students participating in events every day.

The principal thanked the parent groups, the coaches, and other volunteers who helped make the Homecoming such a great day. He also extended a greeting to the extended Avon Grove family. 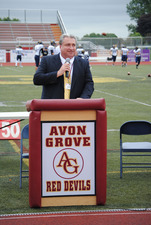 “On behalf of Avon Grove,” Alexander said, “I want to welcome you home.”

Reger noted that Jackson has been a health and physical education teacher at the middle school for the last 16 years. He also helped start the boys’ lacrosse program at the high school 15 years ago. The team quickly developed into one of the perennial powerhouses of eastern Pennsylvania. Jackson’s squad won the District 1 title two years in a row and last year made it to the state finals. Many of the team’s players have earned scholarships to play at Division 1 or Division II schools.

Jackson talked about the support that the lacrosse team receives from the students and the community, and said that he sees a great deal of school pride each day.

“We have a great school and a great community,” Jackson said. “We have so many great people in the community. The culture at Avon Grove is one that we all create. It’s a place where you feel pride, where you feel welcome.”