Unionville continued its tough non-league schedule by traveling to Don Thomas Stadium to face the Exeter Township Eagles last Friday night. Both teams were coming off impressive victories in Week One: Unionville earned a hard-fought 8-6 win over rival Garnet Valley, while Exeter shut out Boytertown, 28-0. An offensive shootout seemed unlikely, but football, being the great game that it is, never conforms to a script. The Indians and Eagles marched up and down the field at a frenetic pace, combining for 52 points and more than 500 yards of offense in a wild 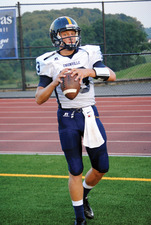 Exeter got the ball first and senior quarterback Chase Yocum showed very quickly why he is one of the best dual-threat quarterbacks in the area. He picked up two first downs running the ball, 10 yards on the first carry and 20 more on the second carry, moving the ball deep into Unionville territory. Yocum threw what looked like a sure touchdown pass to wide receiver Leroy Longenecker in the corner of the end zone, but Unionville cornerback Elan Nash made a nice play to break it up. Exeter settled for a field goal by Nick Bentz to claim an early lead.

Unionville has its own dual-threat in senior quarterback Alex Pechin. On Unionville's first drive, he matched Yocum’s two first downs running the ball before firing a 39-yard touchdown pass over the middle to Nash. It was 7-3 with 2:52 left to play in the first quarter.

Exeter started the next drive at the 33. On first down, Anthony Juhasz raced 67 yards into the end zone, but the Eagles were flagged for an illegal block in the back. After the penalty was marked off, the 42-yard gain put the ball at the 25. Five plays later, Yocum connected with Longenecker on a 21-yard slant for a touchdown. The point-after attempt hit the crossbar so the score was 9-7. 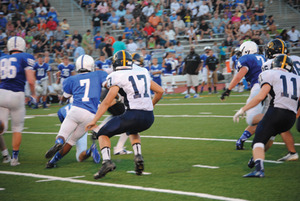 Pechin and the Indians marched 74 yards on six plays in the next series, culminating the drive with a 48-yard catch-and-run by running back Brandon Boon, who found running room in the middle of the field. Pechin kicked the extra point to make it 14-9 early in the second quarter.

Both teams were struggling to find their footing on the defensive side of the ball. Exeter’s high-powered offense continued to make plays: Yocum found Longenecker again for 15 yards, Jeremy Tibbetts rumbled for 25 yards on three carries, and Yocum capped the drive with a run worthy of a highlight reel, breaking tackles as he rumbled 30 yards for the score. Tibbetts converted the two-point attempt, and Exeter was back on top, 17-14.

They wouldn’t hold that lead for long.

It took the Indians just over three minutes to cover 67 yards on its next possession. On a third-and-eleven play near mid-field, Pechin connected with Nash on a 25-yard pass play along the right sideline. Two plays later, from the 19-yard-line, Pechin carried the ball on a quarterback keeper, going straight up the middle of the defense, breaking tackles as he raced into the end zone. The extra point gave Unionville a 21-17 lead. Each team had scored on its first three offensive possessions.

It took Exeter two plays—a 12-yard carry by Tibbetts and a 63-yard completion from Yocum to sophomore wide receiver Gabe Shappell—for the Eagles to score again. Shappell caught the ball in the middle of the field and then cut down the left sideline for the long touchdown.

Unionville’s next drive started at the 10-yard line, and it was the first time in the game that either team’s offense worked with a disadvantage. A false-start penalty on the Indians backed the ball up to 5. But Pechin completed a 16-yarder to Nash to move the ball out to the 21, and the Indians’ offense looked like it was on the move again. Exeter’s defense, however, finally made a stand, stopping Unionville on three straight carries. For the first time in the game, a team was going to have to punt the ball away.

Exeter had excellent field position, starting at the 27 of Unionville, but there was only 12 seconds left in the second quarter. Yocum took to the air, firing incomplete passes on back-to-back plays. On the final play of the first half, Yocum dropped back to pass again as players on both teams scrambled around. There was good protection up front, so Yocum had time to look for an open receiver, but everyone was covered. It seemed like it took minutes instead of seconds for the play to develop. Finally, Yocum saw an opening and fired the ball to Shappell, who was working his way across the middle in the end zone. Shappell hauled the pass in and Exeter had another score. Yocum tangled with Unionville’s Ian Larson after the play and after a long discussion by the officials both players were ejected from the game. Bentz kicked the extra point, making it 31-21, but the loss of Yocum loomed large. In the first two quarters, the quarterback had run thrown for 145 yards and run for 82 yards.

The Indians were no doubt eager to cut into that Exeter lead, but they fumbled away the opening kickoff. Exeter coach Matt Bauer inserted freshman quarterback Brandon Unterkoefler into the lineup as the Eagles took over at the 25 of Unionville. On first down, Tibbetts rumbled 15 yards, then Braelin Grill ran for 10 more to move the ball inside the one. Tibbetts plowed into the end zone for the score. Exeter held a 38-21 lead.

The Indians quickly answered the score. Pechin gained 13 yards on a third-and-long to move the ball across mid-field. Then, two plays later, Pechin found Boon open in the middle of the field. The lightning-quick running back slipped one tackle and then raced 34 yards for the score. Pechin’s extra point cut the score to 38-28.

Unionville’s defense made a stand on the next series. Exeter was facing a third-and-17 when linebacker Dylan Rappucci sacked Unterkoefler.

Pechin continued to turn in big plays for the Indians. On a fourth-and-one, he followed his blockers for three yards and a big first down. Then, three plays later, he put up a pass along the right sideline that stayed up in the air just long enough for Nash to make a sensational fingertip grab at the 15. An eight-yard screen pass to Austin Hofmann-Reardon moved the ball to the 11. With the fresh set of downs, the Indians were looking for the end zone, but Pechin’s pass bounced off a receiver’s hands and Longenecker was there to grab it. The interception kept the score at 38-28.

Unionville’s adjustments on defense were paying dividends, and the Eagles managed just one first down during two offensive series at a critical point in the game as the third quarter gave way to the fourth quarter. But with each minute that passed, Unionville’s chances for a comeback grew longer.

With 5:24 left to play, the Indians embarked on a 70-yard drive. Pechin completed a pass to Boon for 26 yards to pick up a first down on a fourth-and-three play. A pass-interference call on Exeter resulted in another first down. The Indians marched deep into Exeter territory and then Pechin finished the drive with a five-yard touchdown pass to Boon. The extra point cut the lead to 38-35. There was just 2:43 left to play.

Pechin’s strong kickoff pinned Exeter back at the five-yard line.

The Exeter offensive line, which had been extremely effective in the first half, came up big on the next series, opening up running room for Tibbetts. On first down, Tibbetts broke through on the left side and ran for 12 yards to the 17. Grill went straight ahead for three yards. Then Tibbetts ran around the right side for a huge 21-yard gain that moved the chains and allowed Exeter to run the clock out with its next three plays to seal the 38-35 victory.

Unionville head coach Pat Clark said that he was proud with how his team battled one of Berks County’s most formidable teams, even though the Indians didn’t play their best game. Clark said that the defense needs to do a better job of tackling and the special teams unit didn’t execute well enough overall.

“We have a young team and we have some things to work on,” Clark said. “We have room for improvement.” 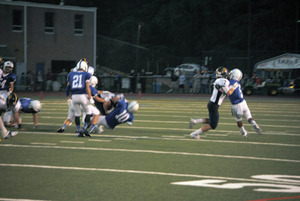 A few plays, especially the two turnovers in the second half, were costly, and against a team like Exeter plays like that are hard to overcome.

Unionville will next play Avon Grove at 1 p.m. on Sept. 13 in the Red Devils’ Homecoming game.