More than fun and ‘games’ at Pony Club National Finals 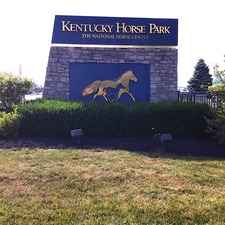 Founded in 1954, the United States Pony Clubs, Inc., now has more than 10,000 members in more than 600 clubs throughout the country. Many of the nation’s most competitive riders, who ride in such competitions as the World Equestrian Games and the Olympic Games, got their start in Pony Club.

To qualify for the annual finals -- which this year included riders from every state except Hawaii -- a rider or team must finish first or second at their regional qualifying games and rally. This was the first of the unusual happenings to befall the girls from Brandywine Hills. Five of the riders were aiming to qualify for the games division at the nationals, which is the only discipline that is a team sport. At the regional rally, held at the Radnor Pony Club show grounds, the girls finished a solid second in the games segment and were ecstatic. But they finished third in barn management, an aspect of the competition in which the team is evaluated on how they care for their animals and the neatness of their turnout.

The girls weren't sure if they would go to nationals or not. Finally, they got the word that 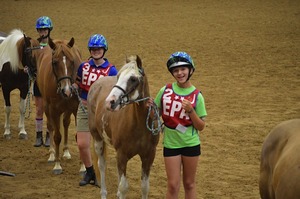 Brandywine Hills would indeed have the opportunity to attend the national finals and compete as a team in the games division, plus Sarah Meek had qualified to compete in show jumping as an individual.

The girls worked with their coach, Megan Mendenhall, practicing the mounted games in which they would be competing in Kentucky. The games, which range from egg-on-spoon races to pole bending, to balloon and five flag, are all relay races in which the relationship, trust, and communication between pony and rider are the key to success.

Two days prior to their departure, Mendenhall faced an unforeseen family emergency with the death of her mother. Left without a coach, the girls turned to Shawna Simmons, 24, of Cochranville, who stepped in and offered to guide the girls, most of whom had never been to the nationals. 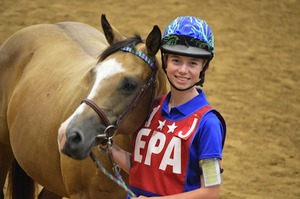 One of the team members, Lexi Simmons, Shawna’s younger sister, had experienced the finals the previous year. It was Lexi who dubbed the team “Here Comes Trouble.”

“I came across the name and it seemed appropriate, so I asked everybody and they all liked it,” said the 13-year-old from Cochranville.

The girls laughed when they talked about the various games they competed in at the finals.

“Even though we knew ahead of time which games they would be, it still is totally different there than practicing at home. There are lots of distractions,” Lexi said.

“Oh, that pyramid game,” Mikayla Meek said with a chuckle, “It was the worst. First, Madison fell 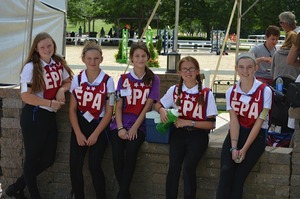 off and then I missed it. What a mess!”

The girls then explained the game. Each rider in the team stacks a piece of Tupperware atop another. But if a piece falls, the rider must dismount their pony, replace the piece and then remount – all of which adds to their time. 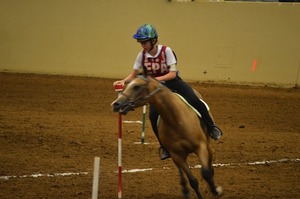 In all, the girls competed as a team in 15 mounted games over a three-day period.

Pam Meek's daughter Mikala was part of the games team, and her older daughter Sarah was a qualifier for the show-jumping competition, Meek said, “Since all the games are basically decided on time, you want to ride a pony that is fast, yet it has to be tolerant to do the all the crazy things like stacking Tupperware, hula hoops and popping balloons. Sometimes it’s the slow and steady ponies that win.”

Team Here Comes Trouble scored very well in stable management. Stable management is critical to the competition since it is heavily weighted in all disciplines.

“Safety and care of the animals is at the heart of Pony Club,” Shawna said. “In stable 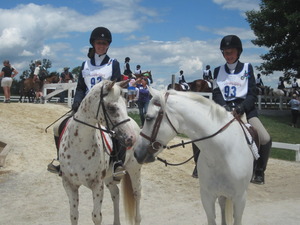 management, the kids have a required equipment list and everything has to be labeled and clean. Plus, they are expected to keep their ponies and their stalls immaculate."

“We got 100 percent on our tackroom,” Madison Swenson of Kennett Square said proudly.

“And we got a couple of sevens, which means exceeds standards,” added Sarah with a big smile.

“The kids basically had to be in the barn at 6 a.m. and couldn’t leave until 6 p.m.,” said Lexi and Shawna’s mother, Cindy Simmons. “It’s a bit unrealistic for them to be there all day and then compete. They were really tired by the last day.”

Despite the 10-plus hour drive to Lexington, Ky., and all the hard work, the girls agreed it was worth it to experience the finals. They are already talking about next year and have some changes in mind.

While the girls all plan to continue in Pony Club, some may branch out and work towards qualifying in another discipline. Even if they qualify in more than one discipline, a rider must choose just one area to compete in at the finals.

“That’s one of the things that is so great about Pony Club,” said Cindy Simmons. "With so many disciplines – dressage, eventing, games, polocross, quiz, show-jumping and tetrathlon -- the kids get a chance to try it all and then pick what they like best.”

Madison, who competed on the games team with her pony Dublin this year, has a new horse and will be concentrating more on him now. “I show him in the hunters, but we think we are going to try to qualify for the dressage in Pony Club because he is pretty good at that too,” she said.

Lexi also plans to compete in another discipline at next year’s finals. “I qualified for games, quiz, show-jumping, and eventing this year,” she explained, “And I had a hard time deciding which to do, but in the end, I wanted to ride with my friends in the games. But next year I hope to compete in eventing with my other pony.”