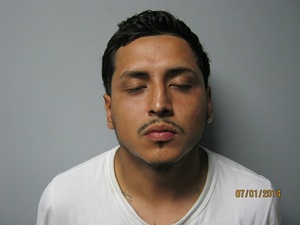 Two men were arrested during a sting operation in Kennett Square on July 1, and both were charged with delivering heroin and cocaine.

Kennett Square police said that Jean Carlos Bernabel, 24, of the Bronx, N.Y., and Eduardo Flores, 23, of New Castle, Del., were arrested on July 1 in the 500 block of South Union Street. Police had been investigating drug deliveries by the duo since early June.

During their arrest, $4,730 was seized, along with an Audi station wagon belonging to Bernabel that was used to transport the drugs. Also seized were 30 baggies of heroin and one ounce of cocaine. Both men were charged with delivery and possession with intent to deliver heroin and cocaine, criminal use of a communication facility, dealing in proceeds of unlawful activities, and criminal conspiracy.

Bernabel and Flores were arraigned and taken to Chester County Prison in lieu of $50,000 bail.

Police said the investigation is ongoing, and further arrests are expected in connection with the case.