U.S. veterans representing each branch of the military lead the parade. 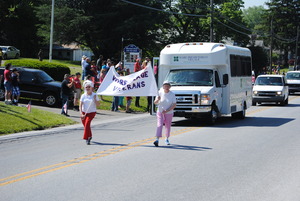 The parade moved through town and ended with a ceremony at the Oxford Cemetery, where hundreds gathered for a solemn remembrance of the sacrifices that men and women have made serving the country in each of its wars. Fulton was just one of the many local heroes who took part in a touching tribute.

“Most of these men and women were ordinary citizens. They answered the country’s call and made the ultimate sacrifice,” said Robert Stewart, the commander of American Legion Post 535.

Stewart noted that the cemetery, an appropriate backdrop for the day of remembrance, is the 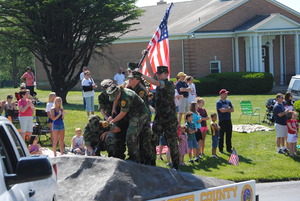 final resting place for more than 1,200 U.S. military veterans. Among them are Archibald McClure, a Civil War soldier who was killed in the Battle of Fredericksburg, and Roy W. Gibson, who was killed in action in World War I. Stewart said that soldiers like McClure and Gibson typified the average Americans who sacrificed their own lives to serve their countries. American Legion Post 535 is named after Gibson.

Stewart joined William Patrick, another local hero who served his country, in the wreath-laying ceremony. 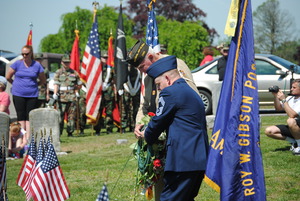 Ken Woodward was the guest speaker for the event. Woodward had a 45-year career in education, including a long stint as principal of the Oxford Area High School. He is currently a member of the Oxford Area Historical Association. His speech included selections from a variety of books, ranging from “1776” by David McCullough to “The Guns at Last Light” by Rick Atkinson that illustrated the selfless sacrifices that veterans have made. The books he cited shared stories about every conflict the country has ever had.

Woodward even incorporated letters from local resident Louis Peters, a Marine who served in Korea. Peters’ letter back home explained the level of commitment that the soldiers had when fighting for their freedoms.

“Every Marine had the idea that he was going to fight to the last,” Woodward explained. 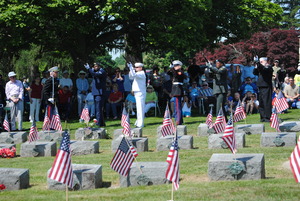 Woodward talked about how GIs helped the U.S. persevere in World War II. He said that the media, movies, and video games make it hard to remember that average everyday citizens are the ones who play a key role in combat. Time and again, men and women have been willing to risk their own lives for the sake of their country.

“We forget that real people are involved,” Woodward said. “These heroes are real people—our friends and family.” 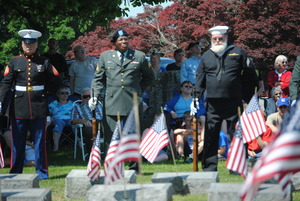 The Memorial Day observance in Oxford was a community-wide event that linked generations. In addition to playing an important role in the parade, the Oxford Area High School Marching Band performed several patriotic pieces throughout the ceremony.

The Memorial Day ceremony was enhanced by the almost-perfect weather. Stewart, who was leading his third remembrance, said that the 2014 parade had more participants than the year before.

“We’re getting more organizations involved,” he said. “It shows that the community supports us.”