The new board members for the United Way of Southern Chester County include (left to right) Allen Wu, Bob Shaughnessy, Lynn Jarke, and David Woods. Mathew Gooch is not pictured, but is also a new board member.

For the first time in its history, the United Way of Southern Chester County (UWSCC) has raised enough money in one campaign year to surpass the million-dollar mark in allocations to non-profit agencies that serve the community. 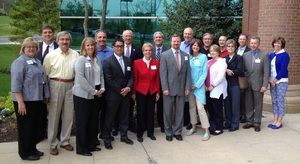 “That’s a big milestone for us and we’re excited about that,” explained Karen Myers, the board president, at the United Way’s annual meeting at Exelon on May 14.

Even before reaching the milestone figure, the UWSCC was the largest funder for local non-profits in the area.

Carrie Freeman, the UWSCC CEO, said that the million dollars will be distributed to 31 agencies this year, ranging from organizations that provide crisis intervention, like the Safe Harbor of Greater West Chester and the Oxford Neighborhood Services Center, to ones that focus on a specific area of need, like the Adult Literacy Program or Camp Dreamcatcher. This year, agencies are receiving between $3,000 and $103,000 each to help them provide services directly to southern Chester County residents.

Approximately $440,080 of the money will be utilized for crisis intervention programs. Another $291,580 is budgeted for programs that promote the sustainability and stability of local residents, and the remaining $268,340 is for education programs that will help people gain or protect their independence.

Freeman said that the current campaign has reached about 94 percent of the annual goal. The campaign runs until August so the hope is that it will reach the target before then.

“As we see the needs going up, we’re doing everything we can to increase what we can give out,” said Sparks.

Even after reaching a new plateau for allocations, the agencies in the area are asking for more assistance than what the UWSCC can provide.

“The trend is that the agencies come to us with larger requests,” Sparks said, explaining that many of the agencies have been seeing funding decrease. “There are always more requests than what we can meet.”

The United Way’s board of directors now coordinates three fundraisers throughout the year to boost revenues: the Chocolate Lovers Festival, the Unionville-Chadds Ford Family Night Out, and the Salon du Chocolat. The three events tallied $32,597 collectively.

Freeman said that the United Way of Southern Chester County has a unique way of determining how the money raised each year is distributed to the agencies. This year, there were 37 panelists—all residents or businesspeople with connections to southern Chester County who sat in on presentations by officials of the agencies so that they could make decisions about allocations.

It’s not an easy job. How much money gets distributed to a center that serves crime victims? What kind of support will the senior centers receive? How much for the Kennett Area Community Service or for the youth center that serves youngsters in the Kennett and West Grove communities? All the programs provide valuable services that strengthen the community.

Four panelists—Robert Locke of Kennett Township, Dave Halm of West Chester, Allen Wu of Avondale, and Robert Shaughnessy of Unionville, agreed that serving on the allocations panel was a great way to learn about the good work that so many organizations are involved with.

“To me,” said Locke, “It was an incredible eye-opener. It was an amazing process to hear about how much is happening in Chester County.”

“I grew up here and I didn’t know that there were so many great programs,” said Wu.

Shaughnessy said that what stood out to him was the extent of the need that exists in southern Chester County.

Even though the area is comparatively affluent, there are still many families in southern Chester County who struggle to meet their basic needs. Staffers with organizations like the Kennett Area Community Service and Oxford Neighborhood Services Center work year-round to try to help residents in need. Listening to the stories that these non-profit officials shared made a lasting impression with the panelists.

“You want to do so much for these great programs,” said Locke. “Sometimes, you want to give them more than they asked for.”

In addition to the million dollars that the United Way will be allocating to agencies throughout southern Chester County, the United Way also contributes $56,000 for its own in-house programs. Examples include the mentoring that the United Way provides to agencies as well as the budgeting help for people who need it through the Literacy In Financial Training (LIFT) program. These programs were started in response to specific needs that United Way officials saw in the community.

United Way donors have also designated another $22,000 for specific agencies in the community. While there’s nothing wrong with identifying a specific agency to receive all your individual contributions, giving to the United Way itself is the easiest way to ensure that your gift is being used to help neighbors in the community. The UWSCC has always remained focused on the local community, which is something that people like Myers and Sparks are very proud of. Myers is serving her sixth and final year on the board. She said that it has been an honor to help the United Way of Southern Chester County with its initiatives.

“I’m very grateful to have served this organization,” Myers said. “I learned so much about the community. It’s been a joy to know that some of the work that I’ve done has had an impact on peoples’ lives.”

Sparks said that the United Way’s successful efforts can be attributed to the 1,840 people and companies who have supported the campaign so far.

“We just get great support from the community,” he said.

Sparks, like Myers, has volunteered with the United Way for six years. They are both leaving the board after the current campaign, but will remain active as supporters of the ongoing effort to meet the needs of the community.

“For me,” Sparks said, “it’s about giving local and having those funds stay local. You can give to  the United Way and know that you’re supporting a broad spectrum of agencies that serve your community.”

Anyone who would like to contribute to the campaign can send the donation to the United Way of Southern Chester County, 106 West State St. Kennett Square, Pa. 19348 or make the donation online at www.unitedwayscc.org.